Following up from 2014’s urban actioner, “The Equalizer,” the blood-thirsty avenger/defender out to protect the vulnerable from predatory forces is back in fighting form in The Equalizer 2. Returning as Robert McCall, the former CIA-operative-turned-people-protector, is two-time Academy Award winner Denzel Washington and joining with him is director Antoine Fuqua (who directed the charismatic actor to a Best Actor Oscar for 2001’s police drama “Training Day”). Together they set the retaliatory lone wolf on another high-stakes agenda assisting jeopardized individuals in need.

Sadly, however, their latest collaborative effort is a plodding, formulaic firecracker of a twitchy showcase that merely trudges through the excitable motions. Washington’s menacing McCall — entertaining a deadly hidden talent when confronted with unremedied ills — is merely a cardboard caricature pitted in (and against) manufactured messiness.

In this iteration, we find our Boston-based hero employed as a Lyft driver living a low-key existence when not assigning himself high-maintenance “equalizing” duties. McCall is humbled by living in a drab apartment, reading his library collection of books, spending personal time cleansing dirty building exteriors in the neighborhood and even striking up an impromptu friendship with Holocaust survivor Sam Rubenstein (veteran actor Orson Bean). McCall, you see, is a complex man trying to escape the demons of his mysterious past by acting like an everyday man who goes about doing everyday man things.

But when old friend Susan Plummer (Academy Award-winner Melissa Leo, “The Fighter”) visits the isolated McCall and informs him that one of his close pals was viciously killed, the urge for righting a wrong is reactivated and our hero soon decides to undertake this mission to exact some butt-kicking revenge. As if McCall’s perilous plate was not full enough though, there is a side subplot involving a promising art student named Miles (Ashton Sanders, “Moonlight”) who is facing some possible static from a local gang that threatens his promising livelihood.

Unfortunately, The Equalizer 2 feels needlessly forced in producing its synthetic feelings and throbbing thrills. For the most part, Washington anchors this mediocre action flick with an eerie edginess that at times registers with taut resonance. Still, his performance feels conveniently distant while never quite capturing the essence of a broken man haunted by smothering alienation. Instead, Fuqua opts to allow Washington’s McCall to march through his mental malaise without establishing a sturdy understanding for this character’s quiet descent into isolationism and despondency. Lazily, Fuqua and Washington rely on the empty appeal of a rising count of bloody and bruised bodies as the one-man wrecking crew shtick follows its predictable path to resolution.

The Equalizer 2 ultimately joins other conveyor belt revenge fantasies haphazardly conceived in 2018 such as the dreadfully bad “Death Wish” reboot and the gimmicky “Proud Mary.” Washington may be a dynamic actor and Fuqua a competent director, but neither deliver their A-game in this lukewarm sequel. While it probably won’t happen, the best course of action for Washington and company is to put a halt to McCall’s prowess as a pugnacious problem solver and shelve any potential further installments before things get any more askew. 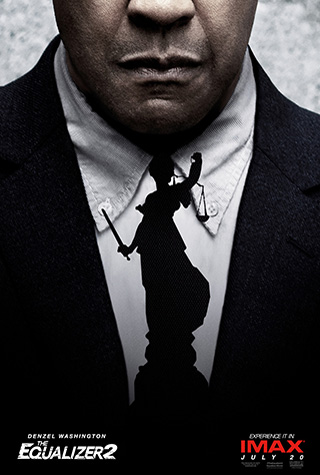