It might not bode well when a film’s title is a text message initialism (compounded with a nonsensical exclamation rather than a question mark), but Peter Herro’s debut feature, WTF!, is a surprisingly enjoyable micro-budget slasher with an old-school sensibility.

It’s a motley crew, made up of bimbos and jocks. Plus there’s Rachel (Callie Ott, “The Horror”), a meek girl who once witnessed a terrible crime, and who now struggles with debilitating flashbacks. With the encouragement of her brother (Nick Reilly, “Face 2 Face”) and her friend Bonnie (Andrea Hunt, “Awaken the Shadowman”), Rachel is persuaded to go along for the ride to “conquer her fear.” WTF!

The characters are reasonably well-sketched, even if they are reprehensible. Wisely, Herro and his co-writers make sure the joke is always on them. Redemption? Hell, no — as the kids admit themselves, they’re going straight to hell.

The script to WTF! is smart enough to make it clear that we’re supposed to be laughing at them, not with them. In particular, the bitchy bickering between the selfie-obsessed Bonnie and hyper-defensive Lisa (Sarah Agor, “Hatchet II”) is funny (“I will jujitsu your tits off!”), as is their fickle pattern of reconciliation seconds later.

With a hint of Kate Mara, Ott is the standout as far as the performances go. She depicts a young woman both determined and vulnerable. The victim of a borderline abusive relationship, we are successfully convinced to root for her to knock her worthless boyfriend (Johnny James Fiore, “Private Dicks” TV series) on his ass.

The twist — pertaining to the identity of the killer — will undoubtedly split opinion. It’s a bit of a cheat, in all honesty, although it does toy with our perceptions, and may even threaten to trigger a discussion about the nature of film as a visual medium. Maybe.

Tropes abound, from weird locals espousing caution, to sabotaged escape vehicles, to characters wandering off alone with the full knowledge that a murderer is on the loose. But it’s all done with a consistent tongue-in-cheek tone and good pacing across an attention-friendly running time, so it’s hard to complain. It isn’t the smartest show in town, but WTF! is sleazy fun. 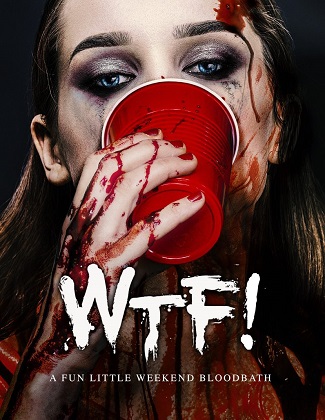