If among our current generation of Hollywood actresses there were any one who embodied the idea of “classic beauty,” it would be Blake Lively. She is undeniably radiant, carrying a grace and poise that few others can master, and in this sense is perfectly cast as Adaline Bowman: A beautiful young woman who ceases to age at 29, when she finds herself in a near-fatal car crash. Adaline in the present day is quite literally what some people consider themselves to be: An old soul trapped in a young body. Lively speaks with just the right cadence to really sell Adaline’s true age, and she certainly has the right wardrobe to pull us in, casually dismissing our skepticism with a twinkle in her eye and a flip of her golden locks. But this superficiality is where the focus of the film lies, and if we accept that from the onset, then we can enjoy the film for what it is — and in truth, Adaline for what she is — a gorgeously empty piece of art.

Directed by Lee Krieger, The Age of Adaline begins by taking us through a series of flashbacks in which we learn about Adaline’s life, and particularly the accident at the center of her extraordinary condition. As she is first submerged in freezing water, and then struck by lightning, an unnecessarily intrusive and scientific voiceover describes her state of anoxic reflex, and goes on to talk of a ludicrous scientific theory that will not be discovered until 2035 — the very theory that means she will cease to age from that moment onwards. The omnipotent voice then describes for us (while we are watching it occur on-screen) how increasing suspicion at her lack of aging and eventually an encounter with the government force Adaline to go into hiding — or more accurately, hiding in plain sight. She has, we are told, moved from one place to another every ten years, changing her identity as she goes, maintaining a connection with only her daughter.

And so in the first 20 minutes of The Age of Adaline, we are immediately and painstakingly aware of the fact that the film does not trust us as an audience, choosing instead to spoon-feed each morsel of information to us with the gentle voice of Hugh Ross. In fact, even watching the very same montage with absolutely no narration would tell us everything we need to know. But the detailed narration has an effect more damaging than even this; in its determination to explain each tiny element of the accident as a scientific occurrence, it removes all plausibility. Perhaps left to our imaginations and our inherent acceptance of fantastical elements, the film could have thrived as a slightly magical, romantic tale. Yet Krieger doesn’t even bother to ask us to suspend our disbelief. Instead, put under its own scrutiny, the film begs skepticism and even humor at its lack of credibility.

At the film’s beginning, Adaline (currently in the alias of Jennifer Larson) is just seven weeks away from another move, where she will start her life anew once more. As luck would have it, this is when she meets Ellis Jones (Michiel Huisman, “World War Z”), a dashing and wealthy young man who is charming and philanthropic to boot. Of course, it’s hard to believe other men have not doggedly courted Adaline in the past, being as lovely as she is in both personality and looks, but for some reason or another it is understood that she has generally stayed away from romantic attachments. Perhaps it is for fear that no one else would understand her condition, and perhaps to avoid watching a loved one grow older and die while she remains unchanged (at least physically), but while the reasoning may not be evident, what is clear is that Adaline is incredibly reluctant to change her single status. She gives in to Ellis eventually, and the blossoming relationship is just getting started when a trip to visit Ellis’ parents throws everyone for a loop — and not in the way you’d expect.

Both Lively and Huisman are alluring, and do a good job of being emotionally connected to their characters, and yet it remains that very little chemistry exists between the two on-screen. Given both the timeline and the screen time afforded to the development of their relationship, the connection between the two needed to be overpowering — seducing us from their first encounter — but the witty banter they exchange is more appropriate for a casual, aimless relationship.

This is where the crux of the problem lies: For everything that Adaline is supposed to have lived through, she is almost unbearably bland. It is, naturally, understood that she is beautiful and has a personality that makes her instantly likable to nearly all she encounters, and yet even this is a focus not on her, but on other people’s experiences of her. The brief moments of heartache Lively manages to facially portray hint at a sense of loss none of us will ever truly understand, and yet as the film tells it, her life revolves around a romance. The entire plot of The Age of Adaline is driven by her decision whether or not to start a relationship with Ellis, and it’s hard to believe that this is the most consequential thing that has happened in her entire life. The film seems to be telling the tale of Adaline Bowman and Ellis Jones’ unusual relationship, leaving us with one question: Where is the story of Adaline?

The true stars of The Age of Adaline are Harrison Ford (“42”) and Ellen Burstyn (“Interstellar”), who both bring an almost magical quality to the screen in every appearance. Ford — an actor with his own strengths — has rarely been this emotionally compelling, and Burstyn shines as the daughter of a woman 55 years younger than her, making at least one aspect of the film totally believable. Lively provides a strong turn herself, and this might well be the best acting of her career to date (“Savages” being her last feature), but with a character whose main purpose is to be mildly troubled while still appealing to men, she is deprived of any real challenge. Very few could say that The Age of Adaline is not visually spectacular in almost every way — cinematography, costume, set — all come together beautifully. It’s just a shame (or really, it’s just typical) that the creation of a stereotypical female character prevented the writers from being able to see the real story that was waiting to be told. 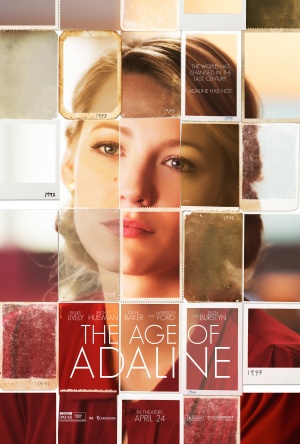