Trainwreck. Rarely has there been a more appropriately named film than this one, except like an actual train wreck, I COULD look away from this picture, I just wish I had more often. There are few things even remotely redeemable — or humorous — about this picture, written by Amy Schumer (also the star of this film, “Seeking a Friend for the End of the World,” “Inside Amy Schumer” TV series) and directed by someone who SHOULD know something about comedy by now, Judd Apatow (“The 40 Year Old Virgin,” “Knocked Up”).

When you immediately hate the main character, nothing really can salvage the rest of the movie and, unfortunately, there is nothing to like about Amy (yes, Amy plays another Amy, how imaginative), who is a pot-headed, amoral alcoholic slut who revels in that lifestyle, so much so that she makes fun of anyone who does NOT indulge in her many, many drunken one-night stands, including with a muscle-bound John Cena and a 16-year old intern from her job (and that’s not even the creepiest thing in this movie, friends).

She also works at a typical made-up New York slick page magazine where most of her co-workers are as ignorant and shallow as she is, and where her boss, Dianna (Tilda Swinton, who once won an Academy Award for her work in “Michael Clayton,” if you can believe it), makes the supervisors in “Horrible Bosses” look like the Mormon Tabernacle Choir on Easter Sunday (she even counsels Amy to “get over” the grief just eight days after a major character dies, yes, there’s a death in this “comedy,” too).

Trainwreck seems to make the statement that you have little to no hope to grow normal if you were raised by a selfish, sexist and verbally abusive parent (in this case dad Gordon, former SNL member Colin Quinn). When Amy and Kim (Brie Larson, “Short Term 12”) were children, their father divorced their mother because he couldn’t stay committed to one woman. In one of the few funnier moments, he explains to the children that marriage is like having just one doll to play with for the rest of your life. It’s an inspired line to kick off the film, but the comedy does not sustain the beginning.

So, Amy grows to be who she is and, without judging, we see she is not really happy, but a bitter, lonely stoner drunk whose only intellectual stimulation is to watch a movie-within-a-movie (with Daniel “Harry Potter” Radcliffe and Oscar-winner Marisa Tomei) with Cena before he dumps her. Speaking of the wrestling superstar, the short scene where he tries to accommodate Amy by speaking “dirty” is fairly funny, except that his huge naked body covering her like a tsunami is an incredible distraction.

Amy must also deal with her sister, who is married with a stepson culled from the “Omen” films, and therefore is the target of her smarmy and angry jokes.

But salvation is just around the corner when she is forced to interview a sports physician, Dr. Aaron Conners (Bill Hader, another SNL alum, “Superbad”) for a magazine article she’s writing. Amy hates sports and has absolutely no interest in the assignment, but Aaron is different from the guys Amy usually brings home and might actually be in love for the first time, and he falls head over heels for her. Now is when the story gets even more convoluted. Aaron is handsome, successful, confident and a good human being (as written here), but he can only find love with this person?

Okay, I know opposites attract, and in movies like Trainwreck, we are supposed to suspend our disbelief (and our intellect) to the point where we actually think this relationship will work. Despite some halfway humorous interventions with LeBron James, Matthew Broderick, Marv Albert and Chris Evert, among others, this has has Apatow’s blueprint ink smudged all over it. Perhaps if Schumer, whose cable series has been recognized for breaking new ground for female comedians, had a little more say so in the script she wrote, we could feel more empathy for her character and thus connect better with the overall project.

In the end, however, with its completely concocted and cockamamie conclusion (cheerleaders, NBA stars, acrobatic dunksters, etc.), I found myself less concerned with the story and just eager to get out of the theater, find a gun and put it in my mouth. Not that the film depressed me or anything. No, never . . . (bang!) 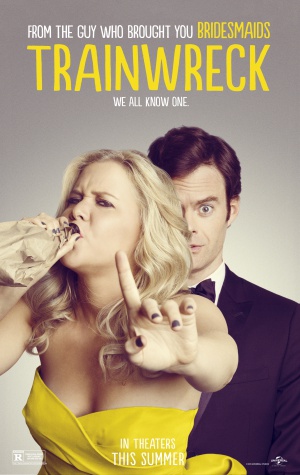