“Life leaps over oblivion lightly, losing only a thing or two of no importance and gloom is but the passing shadow of a cloud” — Yann Martel, Life of Pi

Moments of crisis can bring a family closer together but can just as easily rip them apart. In first-time director Elizabeth Chomko’s What They Had, siblings Nicky (Michael Shannon, “The Shape of Water”) and his sister Bridget Ertz (Hilary Swank, “The Homesman”) walk a thin line between the two possibilities as they attempt to provide proper care for their elderly mother Ruth (Blythe Danner, “Hearts Beat Loud”), a victim of Stage 6 Alzheimer’s Disease. Set in Chicago, the film opens with vintage photographs and home movies of Ruth and husband Burt (Robert Forster, “London Has Fallen”) in their youth. The next image we see is a bewildered Ruth getting out of bed in the middle of the night and walking out of her house into the abrasive winter cold, dressed only in her nightgown.

Although he has been through this many times, a frantic Burt phones Nick to ask for help and alerts Bridget in California who flies to Chicago together with her college-age daughter, Emma (Taissa Farmiga, “The Nun”) to assist in the search. After Ruth is finally located and brought to the hospital under observation, the family gathers around her to offer words of support. She effusively recognizes her children, giving them hugs and calling them “my babies,” but refers to Burt as her “boyfriend,” rather than her husband. The doctor recommends that Ruth be placed in a nursing home, euphemistically referred to as full-time “memory care,” and also suggests that her husband live nearby in an assisted-living facility.

Burt, however, has other ideas. Citing his commitment to Ruth and the vows he took at their wedding, he insists that she remain at home with him. In a powerful performance by Forster, he denies the full extent of his wife’s incapacity and stubbornly maintains that all she needs is a trip to Florida to get her head straight. While his judgment in the matter is open to question, it is clear that he is coming from love and what he sees as support and Chomko fortunately does not turn him into a villain. Bridget tries to appease her father but Nick will have none of it. Although he is unafraid of confronting his dad and does so throughout the film, his fear of being like his father is, at least, a restraining influence.

While the debate rages within the family over what is best for Ruth, Burt chides Nicky for not realizing that his girlfriend has lost patience while waiting for him to propose marriage and condescendingly calls him a “bartender” instead of a bar owner. Driven by her brother’s confrontational style and his resentments over his belief that she was the favored child, Bridget slowly comes to grips with the fact that she only married her lackluster husband Eddie (Josh Lucas, “Boychoir”) to win her father’s approval and is now stuck in a relationship that is empty and unsatisfying. Another subplot involves Emma’s reluctance to registering for classes and return to college for the coming semester.

While emotional moments between mother and daughter surface, Emma’s character remains undeveloped and the story line is simply dropped. Though What They Had does not deliver the emotional heft that it promises, outstanding performances uplift the film. Swank is effective in bringing the necessary vulnerability to her role without appearing to be self absorbed, and Shannon also gives one of his strongest performances as the belligerent son who does not hold back his verbal daggers pointed at whoever happens to be present.

To her credit, Chomko lightens a grim situation with gentle humor. A deadly serious Nicky tells Bridget that his mother “hit on him” on their return from the hospital, a story to which Bridget can only respond with hearty laughter. Even a touch of humor of this kind is welcome to those who must deal with the heartbreak of seeing a loved one losing their grip on reality, day by painful day. 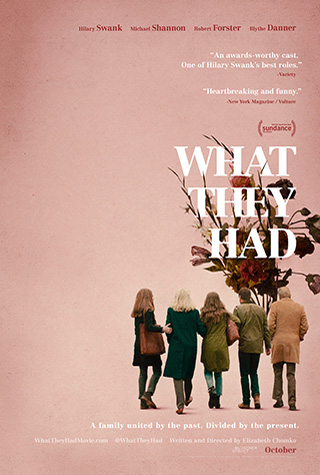