In Seth Gordon’s (“Freakonomics,” “The King of Kong: A Fistful of Quarters”) Horrible Bosses, you’ll meet the tool (Colin Farrell), the psycho (Kevin Spacey), and the man-eater (Jennifer Aniston), three higher-ups that make their employee’s lives a living hell. First in line is Bobby Pellitt, the son of Jack Pellitt (Donald Sutherland) and the heir of Pellitt & Sons, a lucrative chemical company. But Bobby, a rowdy cokehead, quickly dissolves the business’ integrity after his dad’s death, forcing Kurt (Jason Sideikis), the senior accounting manager, to fire all the fat and crippled workers whilst he parties and plans to dump noxious waste onto populated areas. Then there’s Dave Harken, Nick Hendricks’ (Jason Bateman) boss, who dangles a promotion in front of Nick before giving it to himself, alleging that the disgruntled worker, who works from sunrise to well-past sundown, admits that he’s not made love in six months, and keeps only an old lime in his refrigerator, is an “alcoholic.” Finally, Dr. Julia Harris, whose sexual hungers led her to blatantly try to seduce and blackmail her assistant, Dale (Charlie Day), who’s engaged and finally about to live out his childhood dream of becoming “the best husband ever.”

Kurt, Nick and Dale, like most people who hate their boss, constantly amuse the notion of killing them (while also loathing the fact that they can’t just quit). But one night, inside a sleazy bar on the outskirts of town, the trio takes it a step further by hiring a hitman, Dean ‘MF’ Jones (Jamie Foxx). Although, Jones, who is already on probation for “some crazy shit” would rather consider himself a “murder consultant,” agreeing only to help Kurt, Nick, and Dale do the dirty deeds themselves (alas for a nice five grand). “It has to look like an accident,” he explains. “A good murder . . . you don’t even have to be there when it happens. And you can’t have a motive, the popo’ll suspect you if you do.” So, to avoid getting caught, the troupe agrees to murder each other’s bosses. However, to do so, proper recon is a must.

As the title implies, much of the focus is on Harken, Harris, and Pellitt. Here, Spacey is the obvious standout. The way his face scrunches up, his slow and methodical delivery (implying that the character thinks that everyone around him is a cockroach), and genuine coldness makes Harken a genuine prick. He’s this summer’s Hans Lander — a character asinine (but watchable) enough to incite reactions from the audience. Aniston, too, despite being 42 (and without a wrinkle in sight), holds her own as the “girl-next-door” type. Unfortunately, Farrell, in his liveliest role since “The Imaginarium of Doctor Parnassus,” isn’t given the screen-time that the character deserves (although Pellitt’s pad — a shrine to sleaziness — with its foosball tables, replica artifacts, and loose boxes of Aunt Nora is probably enough of a statement).

Comparisons to 2009’s “The Hangover” (not its god-awful sequel, “The Hangover Part II“), another comedy that caught critics by surprise (in a unexpected turn, film aficionado, Roger Ebert, calls Horrible Bosses, “funny and dirty in about that order”), are inevitable. And much like the acclaimed Wolfpack, there’s the levelheaded leader, Hendricks, who Bateman channels with a relatable powerlessness; the womanizer, Kurt, who despite not having Bradley Cooper’s immediate charm, has a certain fine-aged swagger; and the resident idiot, Dale, the film’s dullest character. Of course, the former two bicker about Dale’s cluelessness, whose sole purpose is to cause mayhem. But it never becomes clear what his (ill-fated) fiancé finds so loveable about him. Though, when has it become a rule that, in order to become successful, all buddy-comedies need a mentally-deficient cohort? In fact, this May’s “Bridesmaids” (a film about a group of women all smart on their own terms) proved quite the opposite.

Admittedly, there are lackluster moments. Mostly they’re scenes or characters that, as funny as they are, could’ve had their ridiculousness expanded upon. Amongst them is Kenny Sommerfeld (P.J. Bynre), who first appears gloating about his success, but quickly admits that he’s broke and has been selling sexual indulgences on the side. Arguably the character that sets the plot in motion, he’s mostly used for cheap humor; luckily, his time is short-lived and overshadowed by Jamie Foxx and a cameo by Ioan Gruffudd (“Fantastic Four“), who plays a male fetishist. Those watching should pay attention to Foxx and the gang during their interactions in the bar, notice how the former sips his drink, intently biting on a straw — this is a classic example of an actor hinting that his character has something to hide.

As we all know, work can be stressful. And despite its few shortcomings, Horrible Bosses is the type of summer entertainment that’ll allow its audience to punch-out for two-hours and (possibly) avoid a mental breakdown. But don’t get too comfortable, that paperwork won’t file itself. 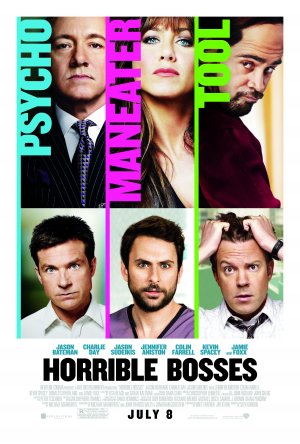