Cinema has long been home to inspirational “true story” interpretations, operating as a vessel through which filmmakers can translate fact into fiction. There’s an audience for it, so the biopic genre and its various filtered offshoots continue to be a mainstay of mainstream movies. There’s a seemingly endless collection of personalities and adventures to choose from, so the question merely becomes which story is worth telling and why?

The answers to those questions have eluded me entirely when it comes to The Mercy, James Marsh’s soppy, sappy summary of the Donald Crowhurst saga. This is the tale of British inventor, entrepreneur, and sailing enthusiast Crowhurst (Colin Firth, “Kingsman: The Secret Service”), who decided in 1968 to join a prestigious race around the globe in which he would pilot a speedy trimaran that wasn’t ready for such a voyage.

Crowhurst was an amateur sailor who was so confident in his ability to complete what everyone else thought was an impossible task that he signed a contract stating he would forfeit both his struggling company and his family’s home if he were to not finish the race. He sold local businessman Stanley Best (Ken Stott, “One Day”) on the idea of a customized boat that would be fast enough to make him a formidable contender and Best then footed the bill, even as costs ran up and the launch date kept getting pushed back.

Eventually, Crowhurst was tempted to pull out of the race when the deadline to leave arrived and he felt the boat was still not in tip-top shape, but fearing financial ruin, he went anyway. And then everything went predictably wrong as Crowhurst languished in the Atlantic, lying about his progress while never coming close to actually competing in the race.

Should we really be celebrating the folly of a man who chose to do the impossible for no good reason and then quickly discovered that, yup, it’s impossible? There’s probably an angle worth approaching this from, but Marsh is not the director to do anything beyond the scope of a conventional weepy drama.

An attempt to rehabilitate Crowhurst’s reputation by observing the man he was outside the legendary stature of his boneheaded seafaring misadventure could be more meaningful, while an investigative mystery involving the unveiling of Crowhurst’s deception could be more exciting. Or why not a dark comedy that mocks what was so clearly a terrible idea?

A straight-faced recounting of Crowhurst’s apparent thirst to enter the history books or at least win the prize money without humiliating himself is easily the least intriguing and most pointless version of this story, so of course this is the version that Marsh delivers. He is, after all, the guy who made “The Theory of Everything,” a movie that managed to make a total wet blanket bore out of Stephen Hawking’s life. An adventurous, imaginative filmmaker Marsh is not.

His mushy style is at its most noticeable and frustrating once Firth’s Crowhurst takes off to sea. Marsh has so little faith in the collective patience of his audience that he can’t stay with the beleaguered solo sailor for more than a couple minutes at a time. Every chance he gets, he cuts back to England for an update from the press or a glimpse of what Crowhurst’s family is up to. And when those options have been temporarily exhausted, he trots out a quick flashback or two.

There’s a familiar storm sequence shot predictably in the dark with lots of CGI that should remind everyone watching of all the other nighttime seafaring storm sequences they’ve seen in movies before. This all comes a mere five years after J.C. Chandor directed Robert Redford in the brilliant “All Is Lost,” which left us stranded on a boat with Redford’s character for the entire running time, never cutting away to anything else, thus anchoring the drama at the story’s emotional epicenter.

Obviously, The Mercy is trying to accomplish several different things and Marsh wants to track the experience of the other family members as well, especially Crowhurst’s wife Clare (Rachel Weisz, “Disobedience”), so the cutaways are inevitable. But there’s an itchy lack of focus here that obfuscates Marsh’s aim and reduces the movie to scattered narrative debris.

Marsh just cycles through Crowhurst on the boat, having issues, the family back home, pining for him, and the press scrambling about, helping to grow the story into front page news. It’s as clichéd a telling of the story as my mind can reasonably conjure. This is waterlogged cinema, an imitation of life so soggy that it’s best to just let it sink into the depths. 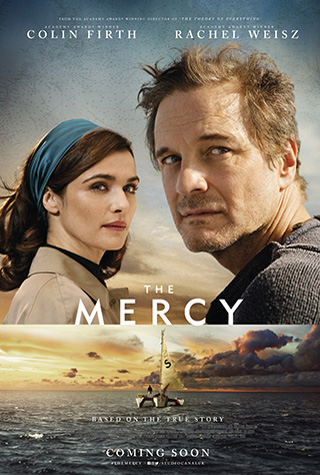