Amidst the blood bath movies of “Conan the Barbarian” and “Fright Night” and the children’s film “Spy Kids: All the Time in the World,” One Day starring Anne Hathaway released this weekend. All summer I have seen trailers for this dramatic film and thought the premise was interesting, despite it looking like just another chick flick. Finding that Roger Ebert liked the movie, I figured that I was in for a real treat that would make this film stand above the rest of the romance movies I’ve seen this summer. Sadly, it didn’t turn out that way.

The premise for One Day is on one cool evening in London, graduates Emma (Hathaway) and Dexter (Jim Sturgess) decide to follow in their friends footsteps and spend the night with each other. After an awkward attempt to make love, the two decide to be friends instead. The movie then tracks their separate lives over the next 23 years, as they continue to meet up on July 15th — commemorating the day they first met.

Was a plot so small worth the hype? The answer, at least in my opinion, is no. At first I was intrigued by the movie as the two essentially talk about their weaknesses and introduce us to their personalities. The first couple of years really brought the dynamic duo to life and did a nice, concise job of giving us the backstory for this friendship. However, the movie soon takes a turn down the slow and boring path as we soon get hit over the head with a lot of monotonous details. On top of the repetitive information, depression also fills this movie as scene by scene, minute by minute, more crap hits the fan, most of which comes in the form of alcoholism or relationship troubles. Even at the end, the film seems to drag on, just like in “The Lord of the Rings: The Return of the King,” leaving you to wonder what the point of these final scenes are when there is a much better stopping point ten minutes earlier (I will say the twist near the end of the movie was certainly a surprise to me, which I guarantee will shock a majority of the audience).

Now don’t get me wrong I’m perfectly fine with seeing these realistic problems play out on screen and watching to see whether the characters succeed or fail. However, these trials should either be faced in a shorter amount of time, or at least have some more general comedy to help relieve the sadness. This movie fails to do both things. One has to listen very carefully to the dialog to find any nuanced humor — there are no silly accidents, vulgar sex jokes, rude gestures, or childish comedy to take the edge off with. The lack of release and the slow pace resulted in me feeling bored and mentally drained.

Nonetheless, One Day has some great lessons within. The first lesson is that friendship takes a lot of work to remain close, especially long distance friendships. The whole movie portrays how Emma and Dex must learn to change themselves to keep their friendship alive. Dex for instance must learn to overcome his man child stage and alcohol problems to redeem the slum that he falls into. Emma on the other hand must find confidence in herself, while learning to be less serious and more fun, to help get a better grasp of life. Another lesson is that love isn’t the magical fairy tale that romantic movies and Disney films make it out to be — sometimes the love you seek can come from the least obvious places. A third lesson that was hit hard in this movie is that drugs, alcohol, and mindless sex are not the solution to getting you out of your problems (they actually create more of them).

What more is there really to say about this movie? The sarcasm filled soap opera-like romantic dramedy the trailers showed never materializes. Those looking for intense romance and a rich story will be disappointed by this artistic film, as will those looking for a light-hearted feel good film. Ultimately, One Day serves those looking for a hardcore, massively depressing tear jerker.

I like lots of movies, and try to give you the best idea of what the movie has to offer before you spend your money. I'm always looking to improve so please provide constructive criticism whenever you can and give me some new ideas on how to improve. The main thing I'm looking to do is get preshowings to beat the opening days so I can see the movie well in advance and let you know how it is. However I don't think my state has too many of those. 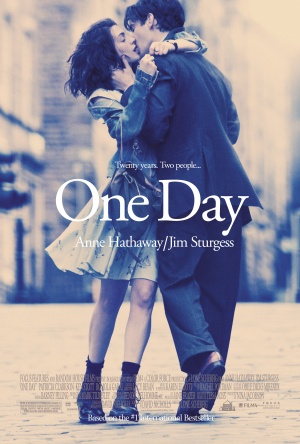