Some bud, a couple of drunken girls, and a bass-heavy soundtrack seem to be the inspiration behind the sophomoric Conan the Barbarian, a remake of an equally bad 1982 motion picture of the same name. It’s a film that was probably scribbled on a memo pad by a frat boy who had one too many cherry bombs and was about to pass out in his bathroom. The epitome of bargain bin fodder (a fate it narrowly escaped with the backing of major studios), this production is one that you’d expect Uwe Boll to direct. Hell, if the swords looked more rubbery, it’d be easy to mistake it for his handiwork. But he must’ve been on vacation, because instead, the moron behind this colossal turd is Marcus Nispel. And the hack screenwriters that helped him are Thomas Dean Donnelly, Joshua Oppenheimer, and Sean Hood.

The plot, which is rushed forward by a few storyboard explanations, is as follows: Born on the battlefield, Conan (Jason Momoa) grows up to see his entire tribe slaughtered by Khalar Zym (Stephen Lang), a sadistic bandit who tries to recreate a mask of skulls, which has the power to grant him unmatched power. Among the dead is Corin (Ron Perlman), Conan’s father. Years pass, and Conan grows up plotting to avenge his people. Zym, now a powerful warlord, seeks a pureblood, Tamara (Rachel Nichols), who is the final piece of the puzzle in his quest for world domination. From there on out, the film is a long stretch of gratuitous violence (most of which is tasteless as even young children and expecting mothers aren’t excluded — as they usually are — from the brutality).

As always, with barbarianism, there comes a hefty load of misogynist. Here, women are blatantly objected, to the point that Tamara, the film’s chief female, is referred to as “property,” before being bound and gagged by the hero himself. As required of Hollywood blockbusters, a spark ignites (no matter how implausible or forced) between the two, resulting in one of the most unromantic make-out sessions in cinematic history. The pair attacks each other’s face, like a duo of mad dogs, hungry for a juicy steak. And, thankfully for them, when things become heated, a pile of hay is conveniently laying in the middle of the war-torn nation. Does said scene have any relevance to the plot? No, and quite frankly, the transition from gore to passionate lovemaking is less than smooth. But the producers probably just wanted to squeeze in one last bit of T&A before the credits roll. Not that’s there’s a lack of nudity, in fact, other (mostly European) women prance around topless, flaunting particularly large breasts (likely handpicked by Kerry Barden, Kate Dowd, and Paul Schnee, who led the casting process). And ironically, Marique (Rose McGowan), an evil sorceress, is the most independent of the troupe. But even she, striving to reclaim her dead mother’s legacy, bows them down Khalar, who pushes her into the dirt. What type of message is that supposed to send to the young ladies?

Then again, Conan the Barbarian is neither targeted towards females, nor is it supposed to follow a moral standard. Unlike most films, the script is pretty unimportant and just serves as a jumping off point for the action (apparently you can’t just have a two-hour display of gore). The story follows a simple template, having a clear-cut protagonist, villain, whose only purpose is power, the beautiful dame, and the same ol’ tale of revenge and retribution. Here is another cheap glorification of death and torture that’s disguised as “popcorn entertainment.” But, the original, too, was severely flawed, and suffered the same lack of character development, making it practically unwatchable (unless you’re in it for Arnold Schwarzenegger’s hamtastic performance). The strategy behind Marcus Nispel’s remake is to up the ante, revving up the bloodshed (and, in the process, further dumbing down a franchise that needs to disappear). During certain points, it’s obvious that Nispel tried way too hard, but that didn’t stop the more brainless audience members from laughing with joy.

And at times, I laughed with them. It wasn’t because Conan used one of his enemies as a slingshot, but rather at the piss-poor acting (although, I probably also did so to hide my aching frustration about actually paying for a ticket). Momoa is tall, dark, and handsome (also notable for his work on the hit-series “Game of Thrones”), making for a perfect fit for Conan. However, his performance also only consists of either a raise of an eyebrow or a simple scream. Granted, the thespian wasn’t given much room to breathe, and his character is designed to be a ruthless killing machine, whose rank as barbarian not only stems for a low social standing, but also for his thirst of blood, efficiency with a sword, and lack of mercy. He doesn’t have any remorse and shows no emotion other than burning anger. Perhaps, that would’ve been acceptable, had the action sequences been more thrilling. But, on the flipside, even though the body count is in the hundreds, thousands of gallons of blood is spilt, and intense tribal beats accompany the skull-crushing mayhem, without a protagonist that audience members can care about, these sequences mean nothing. And because they lack this key component, it’s hard to care about the outcome of each battle.

I’m open-minded when it comes to cinema. Unfortunately, one has to be mindless to enjoy Conan the Barbarian. This sword dance is loud, vulgar, and just plain boring. Think of it as “Season of the Witch Part II.” 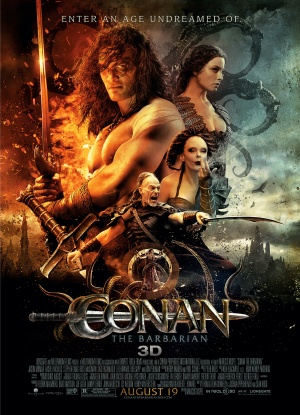