Though there have been many coming-of-age dramas set against a galaxy of different backdrops, there usually is a moralistic or sociological approach to the experience in which a catharsis can be universally reached. Composer/writer/director Amman Abbasi makes his feature film debut with the latest addition to the genre with a surprising blend of naturalistic techniques and nuanced storytelling resulting in a darkly nihilistic portrait of teenage life in rural Arkansas. Though its delivery is not accommodating to a casual audience, Dayveon possesses raw power in its characters (played by a cast of non-actors) that drift through its story with thoroughly intriguing ambiguity.

Dayveon (Devin Blackmon), 13 years old, kicks about his poor pastoral town in the sweltering summer heat after the murder of his older brother. His older sister Kim (Chasity Moore) and her boyfriend Brian (Dontrell Bright) provide as close to a stable environment for him as they can and constantly seek to engage and encourage him. While his disillusionment and boredom push him in directions without care of the cause or consequence, he gets initiated into the local chapter of the Bloods by Mook (Lachion Buckingham). While initially enjoying the camaraderie with the other members and dangerous glam of the gang’s world, Dayveon realizes the glory and satisfaction are superficially hiding violence and existential crisis which ultimately test his fortitude.

The drifting nature of the characters is echoed brilliantly in Michael Carter and Dominic LaPerriere’s editing. The sluggish, almost stagnant pace of many scenes propel the boredom and guidlessness of Dayveon and company until upset by moments of subtle terror and savagery. With these abrupt descents into the dark underbelly of gang life, the frantic and stylized editing meshing with the naturalistic and unique perspective of cinematographer Dustin Lane present a visual exploration by way of Larry Clark’s “Ken Park” melding with John Singleton’s “Boyz n the Hood.” And as with those two films, Abbasi crafts a starkly real world where all of the events depicted on screen could, and possibly have happened in some form in these kinds of communities, which makes the overall attitude even more engrossing than it would have been if slickly produced and polished.

This film isn’t romantic or hyper-stylized. This film isn’t a coming-of-age story that will delight those of the John Hughes or Richard Linklater camps, nor necessarily appeal to those who were fans of last year’s breakout “Moonlight.” Dayveon is a unique experience that can’t be classified in any particular realm of previous visual storytelling, as it takes an uncompromising look at this life without judgments, moralistic protestations, or heightened drama. It lags for long stretches of stale summer air with nothing to do, and adrenaline bursts inconsistently as its titular character gets pulled deeper into the dark underworld. While possessing almost a documentary quality, it isn’t here to entertain or to educate, but to simply show what is.

As the credits role, nothing is solved, nothing may even matter as life goes on like the days before it; and that’s what makes the film all the much stronger. A movie that should be watched several times to be fully appreciated and explored, Dayveon is a work that plays into our easiest desires and our hardest truths all the while saying nothing at all. 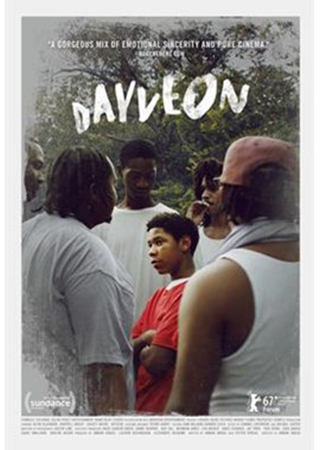