The DC Extended Cinematic Universe continues. In what seems to be the penultimate comic book movie of the year, David Ayer (“End of Watch,” “Fury”) has the task of selling an unknown quantity to mass audiences, while also following the path of the controversial “Batman v Superman: Dawn of Justice.” I have the good fortune to be able to critique this as both a movie-goer and fan of the property in comic book form, so allow me to blab a bit.

Suicide Squad is an adaptation of the comic of the same name, which bands together a bunch of antiheroes from different walks of life and throws them into the lion’s den. Initially conceived as an archetypal espionage series in the same vein as “The Avengers” (1960s TV, not Marvel’s), the book was reinvented by John Ostrander in 1987 with a more of a “Dirty Dozen” meets “Mission: Impossible” with a supervillains mix.

The film seems to have followed that intent, though feels more like the team’s chaotic first outing. Chaotic is the appropriate word. The roster comprises of Rick Flag (Joel Kinnaman, “RoboCop”), Deadshot (Will Smith, “Concussion”), Harley Quinn (Margot Robbie, “The Legend of Tarzan”), Killer Croc (Adewale Akinnuoye-Agbaje, “Pompeii”), El Diablo (Jay Hernandez, “Quarantine”), Captain Boomerang (Jai Courtney, “Terminator Genisys”), Katana (Karen Fukuhara) and Slipknot (Adam Beach, “Cowboys & Aliens”). As “Task Force X,” they’re forced into work by Amanda Waller (Viola Davis, “Blackhat”) after one of her assets goes rogue and begins to lay waste to Midway City. Since every member aside from Flag is a prisoner, they have no say in the matter.

So there’s the basic premise out of the way, without giving away too much. What immediately strikes me about this project is the camaraderie. I enjoyed this ensemble, and buy their chemistry and interactions. Their dynamic is the by far the most positive thing about the film, with Deadshot, Harley and El Diablo as notable standouts. It’s a pity that the plot is less than they deserve. It’s easy enough to follow, and the film wastes no time establishing these characters’ backgrounds in order to get the ball rolling, the problem is, it’s the same tired structure that’s plagued comic superhero blockbusters for the better part of almost a decade.

Tell me if this seems familiar to you. In the third act, the villain, out of desire to destroy or conquer the Earth, builds a doomsday machine that fires an ostentatious beam of white or blue energy into the sky for all to see. Yeah. It’s a shame too, because there was something here. But, as far as the upteenth time I’ve seen this trope, this has at least its own flavor to it. The fatigue, however, is there, all the same. The same can be said for the overly stylistic direction and editing. Personally, the jump-cutting and trippy exchanges don’t bother me much, but I imagine it’ll be tiring for certain attendees.

I also don’t entirely buy the characters’ inevitable turn to the light and desire to save the day or that they’ve supposedly become a kind of family by the end of the experience. To be honest, I feel like a of lot this film’s issues with character progression and catharsis would’ve been solved by just a few more minutes of runtime. Captain Boomerang’s involvement leaves a lot to be desired, as this is the only time I’ve seen Jai Courtney exude any kind of charisma. Suicide Squad also has an air of reshoots about it, and while not distracting, if you’re used to the practice they’re notable.

Suicide Squad is a great movie trapped in a shell of mediocrity. Memorable characters, subpar narrative. Good chemistry and background, underwhelming scenario to utilize either. So as a result, we have a fair outing. But there is something here. I wouldn’t be opposed to a cleaner, extended cut follow-up that really takes advantage of the premise’s potential a little further. But as far as the here and now, I’ve seen better and worse. This falls somewhere in the middle as far as the comic book movies preceding it from this year. It’s not the boost in critical morale Warner Bros. need, but it’s a step in the right direction.

P.S. I haven’t seen enough of Jared Leto’s Joker to really judge him yet, but it is unique. That Alex Ross homage was also an especially nice touch. 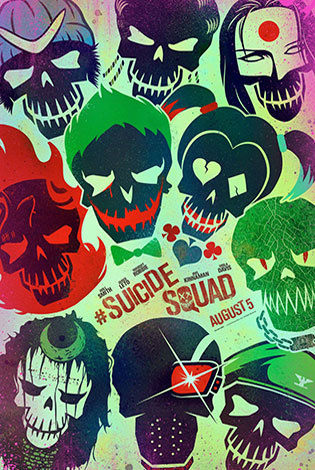