There’s a conundrum going into David Romero’s Making Fun: The Story of Funko, at least from a critical aspect. The issue is perspective. Documentaries like this work better when there’s a sense of objectivity and recollection. If this were made say, 10-20 years from now, we’d probably have a better sense as to where Funko products or Funko as a company stands from a cultural standpoint, if at all. Currently, though, Funko is everywhere. It’s hard to avoid going into most stores and not see a POP! Vinyl figure at least somewhere, and there’s no signs of slowing down. I’m guilty of it myself, I own more POPs than I’d care to admit here, and that’s certainly the appeal for me. I’m most definitely the demographic, but it’s still like a President writing an autobiography in the first year of their term.

Making Fun: The Story of Funko follows the origins of the company, at least at first. It then goes through a series of vignettes with larger fans and celebrities, following impressive collections or the novelty of having your likeness conformed to merchandise, particularly POPs. We get peeks behind the curtain in terms of creation of the company mascot, how POPs as an idea came to be and how the figures are manufactured, as well as the construction and grand opening of the company’s headquarters in Everett, Washington.

Puff piece? Certainly. Though not entirely without merit, at least from a fan standpoint. A good chunk of the 99 minute runtime is dedicated to the fanbase, and it thankfully showcases as many average Joes as it does celebrities who also happen be collectors themselves. So you get both sides. Its sentimentality is a little forced, though. It works best when it’s cutting between fan perspective and the company experimenting with new lines.

The fact of the matter is, this didn’t need to be a full-length film. Given the advent of the Netflix Original “The Toys That Made Us,” it’s even plainer to see that Making Fun: The Story of Funko would be better suited as a 44-60 minute episode of that, to avoid the amount of padding throughout. But again, that usually focuses on lines that have had a lasting presence in pop culture. We’re just not far enough along to see if Funko’s just a flash in the pan or a game changer.

Like most documentaries with a specific focus, it’s only as interesting as your predisposition towards the topic. If you’re a collector, there are worse ways to spend an hour or two. It might give you some semblance of validation for the lack of space in your room(s). Although of that, I might just be trying to convince myself. 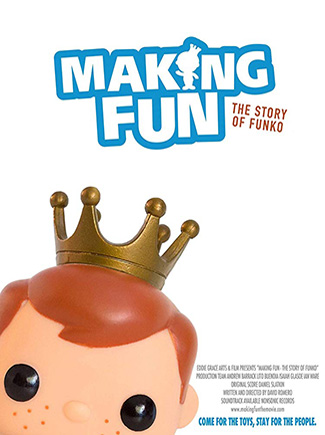