Apparently, Superman is not the only one that can leap a tall building in a single bound. Ubiquitous action star Dwayne “The Rock” Johnson has his own grand-style leaping to do with towering buildings in the boisterous, but disjointed, summertime blockbuster Skyscraper. Monotonously recycled, formulaic and exhausting, Skyscraper is a nosebleed of a thrill-ride that features the charismatic former-wrestler-turned-actor doing what he does best — flexing his pecs in a mindless, destructive, gravity-defying spectacle (“San Andreas” or “Rampage,” anybody?) that will gratify his indiscriminate fanbase who see Johnson’s films as escapism and detest the stuffiness of humorless movie critics needing to “lighten up a bit” and simply go with the flow. Whatever.

Anyways, aside from the primary characteristics already mentioned, Skyscraper also feels so annoyingly comparable to a toothless “Die Hard” knockoff, only without the roguish or authentic suspense that catapulted Bruce Willis’ swaggering John McClane to iconic levels precisely 30 years ago. In fact, the tediously manufactured Skyscraper borrows heavily from other pop cultural influences that range from “The Towering Inferno” to the iconic mid-air stunt sequence in “Mission: Impossible – Ghost Protocol” as well. Really the only impressive aspect to the movie is the imposing presence of the featured architectural structure that provides the setting to the chaos. When an eye-popping inanimate object such as a 200-story, stylishly designed building has more intrigue and character development than its human co-stars, then you know that this bombastic “pie-in-the-sky” potboiler is in need for some major construction.

Johnson stars as Will Sawyer, a former FBI negotiator/rescue team leader and war veteran who suffered the loss of his lower leg during a negotiation gone wrong a decade ago (Sawyer now has a psychological aversion to handling weaponry of any kind). Now Sawyer serves as a security consultant for skyscrapers. He is also a devoted family man who deeply cherishes his Navy surgeon wife Sarah (Neve Campbell, known primarily from the “Scream” film franchise) and twin offspring Georgia and Henry (McKenna Roberts, “The Young and the Restless” TV series, and Noah Cottrell). Anyhow, for the purposes of this movie, Sawyer is enlisted to tackle the security concerns of his latest project — the tallest building in the world based in Hong Kong that is known as “The Pearl.”

Dwelling developer Zhao Long Ji (Chin Han, “Independence Day: Resurgence”) is the mastermind behind the massive structure that is partially occupied until it is approved for residency. In fact, only Long Ji and the Sawyer clan are residing in the penthouse units until further notice. Some wish to see it remain unopened, however, and soon Sawyer’s mental fortitude and physical limitations are put to the test when these opportunistic bad guys (led by Roland Møller, “The Commuter”) decide to set ablaze the high-rise, placing Sawyer’s family in jeopardy. Naturally, the athletic badass Sawyer springs into unbelievable action-hero mode in order to save his family, and protect his good name by combating the intense fire and outwitting the criminals responsible for the inferno.

Director/writer/co-producer Rawson Marshall Thurber (“We’re the Millers”) routinely puts his over-sized star (whom he directed previously in “Central Intelligence”) through the aerial ringer as he has Johnson defiantly jump, climb, hang, scurry and cling to, within and atop the building. The adrenaline is undeniable as the disabled fighting machine forges onward, but somehow the whole demolition of disaster feels empty and relentlessly concocted. The action sequences toil and are dismissive courtesy of the lazy plot (duct-tape has never been so prominently used in a feature before) and the excessive pandering to Johnson’s showboating tactics fails to impress after the twentieth take.

As convincingly engaging and impish as Johnson can be in his many repetitive action-oriented thrillers (and comedies), he deserves a nasty piledriver (or perhaps a “people’s elbow”) for participating in this tensionless-filled slog of a popcorn movie. Indeed, the lumbering and lethargic Skyscraper needs its building inspection permit revoked. 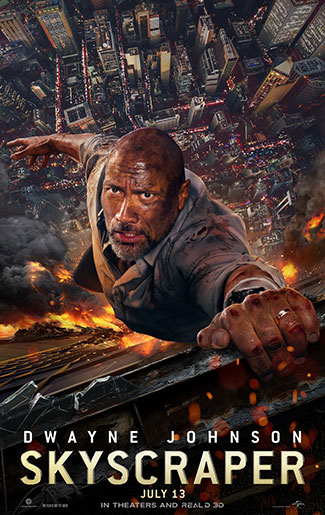