Have you ever been so happy to be wrong? I remember when “Rise of the Planet of the Apes” was being advertised, and I wanted no part of it. I loved the original series in its high and lows, but the Tim Burton remake had completely soured my desire for any new take on what I considered an already complete and poignantly cyclical franchise. But, my mother really wanted to see it, and I was the only spoilsport in the group, so I was overruled. And while imperfect, “Rise of the Planet of the Apes” turned out to be a good time at the movies, as well as a engaging reinvention of the franchise, cherry-picking the best elements of past sequels for a new origin.

Because of its success, I was much more open-minded when “Dawn of the Planet of the Apes” rolled around, and it was much more my speed. It brought back the dystopian status quo, and shed the slight identity crisis its predecessor had. Matt Reeves turned what was a fair attempt into a firm stamp on the franchise. So by the time War for the Planet of the Apes rolled around, I was ecstatic. The result? Not only is this a great conclusion to a consistent trilogy (which doesn’t come often), but also the best of the three films.

War for the Planet of the Apes picks up sometime after Dreyfus made radio contact with the remaining military at the climax of “Dawn of the Planet of the Apes,” as the apes are in repeated combat with the militia. Caesar, older, worn and far more cynical of humanity, defends his tribe while his son scouts for a new home beyond the forests. After Colonel McCullough (Woody Harrelson, “The Edge of Seventeen”) leads an attack on his family, Caesar orders the rest of the apes to seek this new home while he goes after the Colonel on his own, diverting the military’s attention. To give away more would spoil what is a much better movie than advertised.

If I’m being honest, CGI never fazes nor annoys me unless it’s notably unpolished. I prefer practical effects, but accept its place in the medium by now. But I always notice it. Whether I was just too invested in the story to care, or (more likely) the technical fidelity has just improved so much since 2011, I briefly forgot this film was filled with CGI apes. I just bought the performers as apes. Andy Serkis (“Avengers: Age of Ultron”) has long since proven himself as a performer, and the topic’s been brought up before, but we need to find a way to categorize an award for this kind of work. It becomes more prevalent as time goes on.

Though the film is the closest to the original in terms of a re-imagined “prequel timeline” as it were, there is never a moment where I felt like references to the original film were on-the-nose or blatant. Much as I enjoy “Rise of the Planet of the Apes,” Tom Felton spurting Charlton Heston lines ranged from snickers to cringeworthy. Nova (Amiah Miller, “Lights Out”) is also an invaluable presence in the film, not only as a reminder of humanity’s more redeemable side — in what is the bleakest of the three movies — but a subtle allusion to where humanity is headed by the end of all things. We’re also provided much need levity in the form of newcomer Bad Ape, who in the hands of an inexperienced filmmaker, might’ve been a farce in the same vein as Jar Jar Binks. 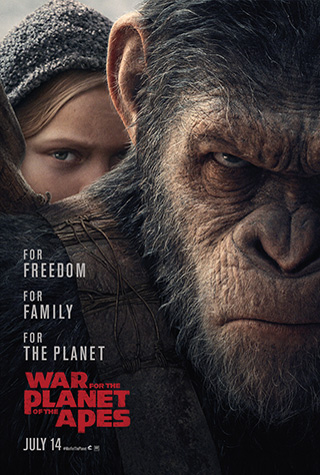