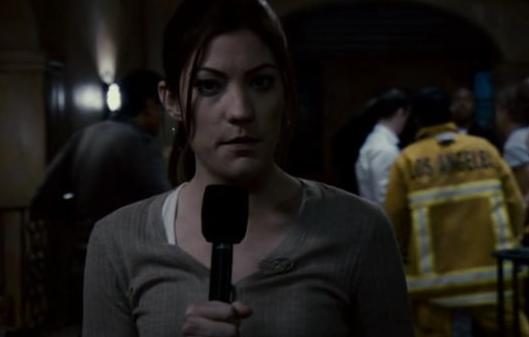 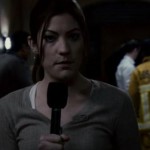 Shame on me for not doing a background check on the latest horror film out of Hollywood, Quarantine. If I had, I would have noticed it was a remake of the foreign horror film “[Rec],” which, incredibly, is still currently enjoying a cinematic release overseas. That’s right, they didn’t even wait until the film had gathered any dust on it before they made a knockoff of it. Damn dirty Americans insisting on the immediate satisfaction of getting an English speaking version to have all to themselves . . .

Anyways, after watching the film, I can only hope the original source was better, as Quarantine was a nonsensical attempt at a horror film.

First and foremost, the film takes a long time to get moving. Twenty minutes is devoted to Angela Vidal (Jennifer Carpenter), a television reporter, as she stands around an L.A. firehouse interviewing firefighters Jake (Jay Hernandez) and George (Jonathon Schaech) as they wait for an emergency. Twenty minutes! The only thing that mildly kept me going was the youthful exuberance and schoolgirl cute looks of Carpenter but by the time they finally get their marching orders, I’d had enough and wanted her and everyone else to die.

Once at their destination (a small apartment complex), our “heroes” are soon sealed in with the residents and an unlucky cop (Columbus Short) by the Center for Disease Control (CDC), as an unknown virus has been traced back to an apartment within. What they don’t know, and those inside soon find out, is that this virus transforms people into blood-crazed, zombie-like monstrosities. With no way out, the stranded group together to try and survive — you can guess as to how successful they are.

For what it’s worth, I’ll give some credit to director John Erick Dowdle for the use of darkness, tight spaces and even the way he uses the Handicam (made nauseatingly famous thanks to “Cloverfield“) to capture the shots. But even with the use of these aids, Quarantine isn’t scary. Nope, not even a single scene made me cower in anticipatory fear or cover my eyes from the on screen horrors.

The biggest problem: I’ve seen it before. Hell, I’ve seen man-eating zombies so many times before (most recently in “28 Weeks Later“) that I practically consider them part of my extended family. And relying on standard “jump scare” tactics that are so obvious they can be seen from space doesn’t help. Neither does having characters who do idiotic things in times of crisis. Splitting up from the safety of the pack is an immediate death sentence — didn’t any of these people see “ Scream?” And call me crazy, but the obvious solution would be to just shoot the infected. Why risk the possibility of death, dismemberment or infection by fighting hand-to-hand or with blunt instruments?

Hollywood tends to ruin the foreign source material in their remakes, so I’m not surprised by the outcome. Quarantine never had the chance of being anything special, but it certainly could have been much better. My advice? Wait for the Spanish original to hit DVD shelves later this year and hope that it is better. 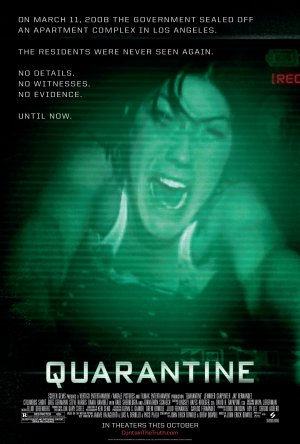