Where do I begin? After all the initial movie reviews and hype surrounding the opening of 300 what else is there to say?

As you know, or will know now, 300 is movie adaptation of a graphic novel by none other than Frank Miller. The novel is loosely based on the real Battle of Thermopylae and inspired by the movie “The 300 Spartans.” It chronicles the futile stand of King Leonidas (Gerard Butler) and 300 Spartan warriors against the hordes of Persia led by Xerxes (Rodrigo Santoro). This stand ultimately wins the war as it provided the time for the Greek city-states to assemble their armies and navies and repel the advancing Persians. But enough about history — lets talk about the movie.

Visually, the movie is shot in a similar fashion as “Sin City” (another Frank Miller adaptation). The lighting is muted, scenery is glossy and spectacular and intense detail is spotlighted on areas the director wants your eyes to travel. It is evident 300 has spent countless hours being edited and altered on a Macintosh to ensure the perfect dramatic effect has been placed at exacting moments and proper angles. I can’t see a single scene that doesn’t appear to be CGI shaped in some fashion — even if it didn’t necessarily need it.

Action-wise, this movie is filled to the brim. Aside from ten to twenty minutes worth of backdrop in Sparta involving Queen Gorgo (Lena Headey) and the council, everything else is violence. I’ve seen it said elsewhere (or at least I think I have), but without a doubt, a tightly choreographed dance of death and dismemberment await all those that go to see this. The scenes are extravagant and overloaded. Yet, through it all, the blood and gore is presented in an almost comic fashion. The blood looks like paint droplets and its’ spray and splatter seems to move in unison with the mayhem all about.

The characters, for the most part, are interchangeable. After all, Sparta men are warriors and there is little to discern one from another. It is rather disconcerting to see that everyone within the city are absolutely fantastic to look at. Every man is pumped up with chiseled features. The women are all slim and sleek with wonderfully long legs. If only I was born a Spartan (of course I would have been cast aside as all unworthy children were)! As expected, there isn’t much dialogue, yet the few words spoken by Leonidas are captivating and insightful — hell, he’s trying to keep 300 men motivated and ready to battle 100,000 foes. He’d better have something good to say!

For the faint of heart and those who cannot escape reality, 300 is not the movie for you. Every scene is over-the-top and exaggerated and its done purely for visual effect. The speeches about Sparta are beyond blusterous. And, I’m no history major, but I’m guessing there is very little in the way of historical fact here. But it all works. It all works very good. Kudos to Zack Snyder, the director, for presenting us with a well painted portrait. 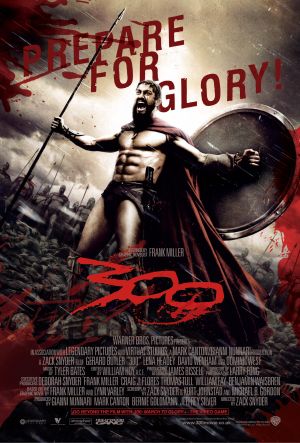