An American couple in Singapore suffers a miscarriage and returns to the United States — but did they bring something with them? Of course they did, in Blood Child, a sublimely awful, soulless affront to respectable supernatural horror tales. I’m not trying to scare off potential viewers here, but if I did, it would be the only scares involved with this schlock.

Bill (Biden Hall) and Ashley (Alyx Melone, “Bloody Bits: Shorts Compilation Vol. 2”) live in Singapore, where Bill has an overseas posting. They have their own live-in maid, an Indonesian woman named Siti (Cynthia Lee MacQuarrie, “Mister John”), and they have a baby on the way. Until Ashley miscarries and sinks into a rather deep depression, sufficiently deep that Bill decides they all (yes, Siti as well) need to head back home to Minnesota, USA to get themselves back on track.

Back in good old Minnesota, Bill and Ashley reunite with Ashley’s best friend Naomi (Charlotte Cattell, “Female Therapy” TV series) and Ashley’s mom Renee (Lisa Kovack, “The Hotel Dieu”). Neither of them particularly care for Siti. In fact, neither does Bill — only Ashley halfheartedly defends the maid while others dress her down for minor infractions. Naomi and Renee are unashamed xenophobes, and they frequently disparage the mostly silent Siti as being from a third-world country. Not an endearing character trait, I’d say.

It’s reasonable to say that none of these people, save for Siti, have any real redeeming qualities. Bill is paranoid, distant, and obnoxious. He leaves very early in the morning to go to work (I don’t believe we ever learn what his job is) and returns very late at night. His lengthy time away from home is largely unexplained and doesn’t figure into the plot. Well, maybe except to give him an excuse to come home late and wonder what’s going on with his distraught wife.

Next, there’s Naomi, who’s every bit the Ugly American. She has a tendency to burst into the home of Bill and Ashley, unannounced. She never seems to take no for an answer, which allows her to run roughshod over Ashley. When things start to get weird (Blood Child is a supernatural thriller, remember), Naomi’s first inclination is to blame the help. And you know the adage about knowing the nature of a person by how they treat the help. Were this not a family friendly review, I’d describe Naomi as a b-word. Yes, I said it. A b-word. She’s one of those people who talk smack about someone else while that someone else is right there within earshot, assuming that since said person isn’t from “around here,” she can’t understand a word. Silly rabbit.

Finally, there’s mom Renee. Her first scene has her arriving to visit her daughter and son-in-law and remarking how she never gets to see them anymore. I mean, there she is visiting them — was something preventing her from doing so earlier? At any rate, she too (inexplicably) despises Siti. And yet, in the grand tradition of poor storytelling, she’s the one who figures out why Ashley’s been behaving so oddly, and why the house is, um, acting up. (In one particularly hilarious turn, Renee calls up a friend who’s an expert in “Southeast Asia mysticism.” You know, as one always does in situations as this.) Renee’s raison d’etre, at least in this movie, is to be a conduit of information that’s delivered too late to make a difference.

Ashley herself does garner some appeal, after all, she’s suffering greatly from the emotional impact of a miscarriage. But since it doesn’t take a normal-intelligence viewer to grasp what she gets involved with in the aftermath, that sympathy stops running at a surplus quickly. It’s also more than a little disappointing that in the face of the abuse heaped upon Siti by her husband, friend, and mother, Ashley says nothing, and thus she is complicit in said abuse. Let’s just say it’s more than a little aggravating. I mean, poor Siti. And not to give Siti short shrift, but . . . well, why not? The writer certainly did. Siti, for all of the sympathy she does garner, doesn’t do too much except cower and perform menial tasks. (Speaking of which: Why on earth do Bill and Ashley even need a maid? There’s only two of them, and one doesn’t have a job. And the house isn’t very big at all. It just doesn’t make much sense). For additional supporting cast, there are Bill’s pals, existing solely to help point fingers at Siti and to point Bill in the direction of extramarital dalliances. I’m not saying they’re successful, I’m just saying that’s their own lame reason to be around.

Here’s the issue I have with it. It doesn’t play as big of a role in the plot as it should have — in fact, as I suspect it was supposed to. I mean, after all — Blood Child is a supernatural horror movie. But most of the film concerns people being mean to Siti and the level of belief/disbelief between Ashley and the rest of the gang who couldn’t think straight. There are weird things (including visions) that occur around the house, a tried-and-true plot device if ever there was one, but they almost seem incidental. What’s worse, the denouement is arrived at too hastily, wrapping things up as if someone were late for a meeting. Director (and writer) Jennifer Phillips tries to create suspense throughout the goings-on, but when that suspense doesn’t lead to much, the viewer is left unsatisfied and, worse, bored. In my case, I wasn’t bored so much as I was angered by how the characters behaved themselves. Just terrible, terrible people. You remember how the family in “Poltergeist” moved into a house built over an Indian burial ground? That family was a nice family, and you were bummed when bad things happened to them. That’s not the case here. But the so-called bad things that happen to our bad characters here aren’t just anticlimactic, they’re inconsequential, robbed of any meaning. The supernatural angle of the entire film feels like it was lazily added on to a subplot about discontent spouses and the people who enable them.

Ultimately, Blood Child was a struggle to get through. It’s more of a mark of endurance than a source of entertainment, a slog of sludge atop a dung pile of chaff. It is definitely not so bad it’s good, either, and it’s not destined to be a cult film down the road. It’s destined to be forgotten. 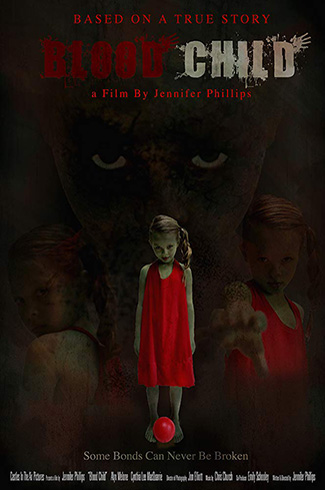