I remember almost like it was yesterday when the news flashed that a traitor to the United States, Robert Hanssen, was caught selling classified secrets to the USSR/Russia. I recall thinking, “why did it take so long to catch this scumbag” and “why would someone sell their country out?”. And what do you know, six years later Breach attempts to answer my questions and more.

The director, Billy Ray, first starts the story by introducing us to Eric O’Neill an up and coming agent (Ryan Phillippe). O’Neill is driven by his desire to be an FBI agent and it is this determination to be seen (tackling covert operations and penning documents) that lands him squarely into the heart of the fire — he is assigned to watch the every movement of suspected traitor Robert Hanssen (Chris Cooper). During the following weeks, we’re given glimpses into the mind of a man who has chosen ego and money over God and Country. It is ultimately his ego that leads to the downfall of what many claim to be the worst spy the country has ever seen.

For the most part, the adapted story works. We all know the outcome so there weren’t going to be any surprises here. Instead of car chases and gun fights, Breach presents this spy case as a psychological thriller. Hanssen and O’Neill go tit-for-tat with each other; each trying to outsmart the other without letting on that there is a game afoot. Hanssen attempts the religious and family angle, by bringing into question the strength of O’Neill’s marriage and his lack of religious convictions. O’Neill counters and ultimately prevails by using Hanssen’s own religious weaknesses and lack of social skills (and close friends) against him. It’s clearly a case of the apprentice overtaking the master.

What I found rather bothersome though, was the attempt to humanize Hanssen. You can obviously draw your own conclusions, but I felt that this piece of shit of a man was made to look like a misunderstood and often overlooked family guy, with deep roots in the church. Of course I realize the crux of the movie is to show that a seemly impotent person can cause such great harm, yet I couldn’t help but get the feeling I was supposed to feel sorry for him. We’ve all got problems and have serious choices to make in life, but I wouldn’t expect anyone to feel pity for me if one of my decisions royally fucked things up. I’d expect a flogging and so should you. Another annoyance, albeit much smaller, is I really didn’t understand the relationship between O’Neill and his wife Juliana (Caroline Dhavernas). Was it put into the movie, just to show he was married? Or perhaps to make us think she was an agent or counter-agent trying to get information? Either way, it doesn’t much add to anything – it’s just one of those things that makes me scratch my head and shrug my shoulders.

It should be noted that as always, Chris Cooper plays a very good agency and/or military man. He’s literally made these type of roles his life work. Highlights of this can be found in, but not limited to: “The Patriot,” “The Bourne Identity” and “Jarhead.” This guy is good and his role as Hanssen here showcases it. Another positive is Laura Linney as Kate Burroughs, the lead investigator into the security breach. Although she plays a minor role there is something about her that I find appealing. I haven’t figured out what it is yet, but so long as there is something intriguing, I’ll remain a fan.

In terms of being a standout spy thriller, Breach falls short. It tends to plod along at a slow and steady pace, intermixed with absolutely no action! Luckily it doesn’t need that excitement to work (although excitement is always a welcome addition). Instead it presents what I suspect real espionage is about: Building trust, exploiting weaknesses and collecting evidence. It may seem to be boring to do 24/7, but for 110 minutes, it is a welcome change. 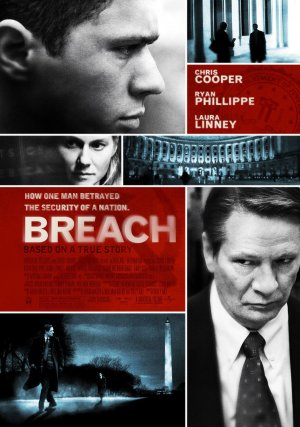