In 1991 Columbia Pictures introduced you to an extraordinary new filmmaker, and an unforgettable new vision. The director was 23-year-old John Singleton, the film, “Boyz ‘N the Hood.” Next year, the studio presented a remarkable new film, from another phenomenal talent. The film was Robert Rodriguez’s “El Mariachi” (the above is a tongue-in-cheek reference to the film, any grindhouse aficionados wanna guess where it’s from?). Made with only $7,000, the freshman effort quickly became an everlasting display of guerrilla filmmaking. But since then, Rodriguez has made some questionable decisions. And while fare like “The Adventures of Sharkboy and Lavagirl 3-D” and “The Faculty” were fatal misfires, “Spy Kids” and its sequel, “Spy Kids 2: The Island of Lost Dreams,” proved to be both financial and critical successes. Now, on the heels of “Machete,” a violent, sometimes tasteless, but always exciting slice of summer entertainment, the director adds another stinker to his schizophrenic filmography. In Spy Kids: All the Time in the World, Rodriquez abandons the blood and vulgarities, briefly reclaiming his innocence (before the release of the much-anticipated “Sin City 2”). Unfortunately, no amount of aromascope (a gimmick that I’ll explain later), can stop this film from being a reason not to have kids.

In his latest “masterpiece,” Jessica Alba is Marissa Wilson, a former OSS spy who retires after giving birth to a baby (Belle and Genny Solorzano). She’s married to Wilbur (Joel McHale), a budding television personality who, ironically, hosts a show called “Spy Hunter.” Once-married, Wilbur already has two children, Rebecca (Rowan Blanchard), a prankster, and Cecil (Mason Cook), the level-headed sibling. Free from work, Marissa tries to establish a meaningful relationship with her step-children, however, Danger D’Amo (Jeremy Piven), the OSS commander, quickly calls her out of retirement when Tick Tock and Time Keeper, a pair of mysterious crooks try to rid the world of time, preaching that humans waste their time on minimal tasks rather than with their families. But doesn’t that seem a bit counterproductive? Nevertheless, the Wilson kids (alongside their robotic watchdog, Argonaut, who is voiced by Ricky Gervais and played by Elmo the dog) become embroiled in their mother’s work, aching to become spies themselves, Wilbur attempts to hunt down the goons to get his show on its feet, and Marissa endangers the baby by taking it with her on every mission. Of course, Carmen (Alexa Vega) and Juni (Daryl Sabara) Cortez, the original spy kids, make appearances. And if it makes a difference, Danny Trejo makes a second-long cameo as Uncle Machete.

What’s there to say about Spy Kids: All the Time in the World? The script is devoid of all charm and constantly tries to clobber its audience with a few G-rated morals. It’s full of fart-and-poop jokes and the enemies are often subjected to a bag of bile being flung into faces. There’s barely any character development and, when it happens, it does so abruptly and without much impact. Finally, it doesn’t help that the film doesn’t have any intimidating antagonists (that’s probably because you could guess the ending from a mile away). It’s hard to believe that Rodriguez not only directed but also penned the screenplay. I guess this is what his talent amounts to when he’s not drunk off his ass.

Halfway into the movie, Argonaut suggests that the characters hold a contest to see which is most annoying. I’d say it’s a close-call. As expected, the acting is terrible. Alba is the soulless box-office lure-in and Gervais handles his lines with the charisma of a thumbtack. Relative newcomers, Blanchard and Cook, are bogged down by an amateurish script. The pleasant surprise is Vega, who comes out looking smoking hot (and perfectly legal). Alba has always been a part of every man’s fantasies, so the most rewarding part of Spy Kids: All the Time in the Worldis when the two beauties share the screen.

Rodriguez’s best movies have been when he worked with the bloody, messy, and cheap. Here, he only sticks to the latter — everything about this film is cheap. From Gervais’ phoned-in voiceover, to the humor, which for the most part, is a series of time-related double entendres and some slapstick, and a 3D treatment that has audience members pay top-dollar for a few, short scenes. And remember when people thought Smell-O-Vision was dead? That’s how it should’ve stayed because the aromascope stinks as much as the pun I just used to criticize it. How it works (or doesn’t) is you’re handed a card upon admission. On it, numbers are written inside small, white squares. As the film progresses, you’re tasked with scratching off the number that corresponds to what’s on-screen. First of all, who decided it was a good idea to make audience members keep a quarter readily available at all times? Secondly, I must’ve been handed a faulty card because all I smelled was cardboard and cheap popcorn. Well that and the stench of a really bad movie. 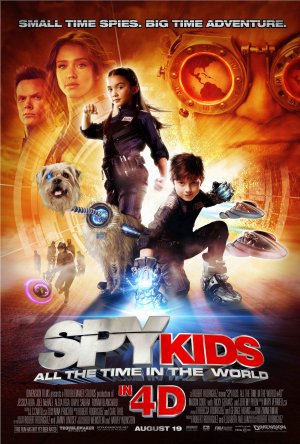