Outwardly unexpressive but inwardly volatile, Jongsu (Yoo Ah-in, “The Throne”), a young delivery man, aspires to be a writer but does not write. He asks himself, “What kind of story can I write?” but he is an outsider looking to the world to provide a story for him. “To me, the world is a mystery,” Jongsu claims, but his attempts to unravel it only lead to his becoming more tightly wound. By providing an undercurrent of tension and increasing anxiety, Lee Chang-dong’s (“Poetry”) Burning (Beoning), his first film in eight years, evokes the sense that something is very wrong, something in the air that cannot be defined but is left for the viewer to discover.

Loosely based on the short story “Barn Burning” by Haruki Murakami, a work that references a 1939 story of the same name by William Faulkner, the film is set in the rural South Korean countryside near Paju City close to the North Korean border. Here where Jongsu maintains his father’s livestock farm while his dad faces trial for a violent outburst against a state official, state propaganda can be heard through blaring loudspeakers. The haunted look on his face lightens when he runs into Haemi (Jeon Jong-seo), an old school friend conducting a raffle in front of the store he is delivering to. Dressed in a mini-skirt, Haemi is warm and outgoing in her greeting though she tells Jongsu that his remark that she was ugly led to her having plastic surgery.

Graciously, however, she invites him for dinner and some love making back in her apartment, albeit without much passion. About to embark on a trip to Africa to study the Kalihari Bushmen, Haemi asks Jongsu to look after her cat, appropriately named “Boil.” He actually never sees the cat in her apartment, however, even though the food he lays out is gone every morning. The cat may or may not exist, nor are we certain that anything else in the film exists. In one scene, Haemi demonstrates her ability as a mimic by peeling and eating an imaginary orange, telling Jongsu that all it requires is the willingness to forget that the orange is not there.

Weeks later, Haemi returns from Africa and asks Jongsu to pick her up at the airport, but without explanation, she arrives with a mysterious Korean, Ben (Steven Yeun, “Sorry to Bother You”), an apparently wealthy dilettante who drives a silver Porsche and lives in an upscale apartment. When Jongsu asks Ben what he does, he replies only that he “plays,” prompting Jongsu to remark that South Korea is filled with “Great Gatsbys.” Oddly, Ben also admits that he has never cried in his life. “I can’t remember ever shedding a tear,” he says, “so there’s no proof of sadness.” Ben, who lives in the exclusive Korean district of Gangnam, regularly entertains friends and invites Jongsu to join him, but the young man remains at a distance, eyeing the intruder and his vague relationship with Haemi with jealousy and suspicion.

Jongsu’s discovery of a drawer in Ben’s luxury apartment filled with a variety of female trinkets and other miscellany only raises more suspicion. One evening, Haemi, with arms stretching to touch the setting sun, performs an uninhibited dance she learned in Africa which depicts the “Great Hunger,” the need to penetrate the meaning of life. When Haemi falls asleep, the two men smoke pot together and Ben confesses that he has an odd habit of burning down old greenhouses, a hobby that he says brings him ecstasy, like “a bass sound that rips to the bone,” a sound reflected in the relentless score by Mowg (“The Witch: Part 1 – The Subversion”).

Warning Jongsu that “time takes away what isn’t properly valued,” things become even stranger when Jongsu receives repeated phone calls with no voice on the other end and Haemi is suddenly nowhere to be found. As Jongsu becomes more and more combustible in his search for Haemi, he feverishly attempts to unravel the riddle by staking out all the area’s greenhouses in the blue light of early morning, but his quest remains elusive. When Ben tells him that there’s “no right or wrong, just the morals of nature,” the film prepares us for its startling conclusion.

In Burning, Lee makes us aware that, for many people, life is a party to which they haven’t been invited. While the film has an element of class privilege and economic struggle, it is also a film that, under the surface, has a residue of undirected anger. According to Lee, “the film references the anger and helplessness of young people today, and their sense that there is something wrong with the world that they don’t quite realize or understand.” Brilliantly performed and impeccably directed, like many powerfully realized works of art, Burning will keep you pondering its implications for a long time. 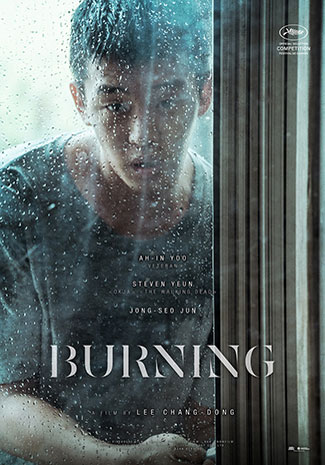