The ongoing “Ip Man” movie franchise, essentially a series of increasingly fictional biopics about the martial arts master most famous for teaching a young Bruce Lee, has long been a solid source of slickly spectacular set pieces. Now, the tradition continues in the spin-off Master Z: The Ip Man Legacy, another action extravaganza pitting a heroic Hong Kong fighter against punchable, kickable forces of evil.

Master Z: The Ip Man Legacy only features original series star Donnie Yen in his titular role during the briefest of flashbacks that recall events from the 2015 sequel “Ip Man 3,” so the protagonist part here instead belongs to Cheung Tin-chi (Jin Zhang, “The Grandmaster”), a disgraced expert in Wing Chun, the same martial arts discipline that Ip Man previously popularized.

Having lost to Ip Man in that previous movie, Tin-chi has now moved on to a new life with his son, selling groceries while juggling the responsibilities of being a single dad. Things are hectic, but simple and relatively quiet, until Tin Chi runs afoul of gangster Tso Sai Kit (Kevin Cheng, “The Woman Knight of Mirror Lake”), who has a China-sized chip on his shoulder thanks to living in the shadow of his powerful mob boss sister Tso Ngan Kwan (Michelle Yeoh, “Crazy Rich Asians”).

Just as Kwan is trying to go straight by steering the family business down a more legitimate and legal path, Kit is eyeing up an opportunity to start peddling drugs on bustling Bar Street, a stretch of road where much of the movie takes place. Tin Chi can’t help but get in the middle of this conflict, since he’s recently befriended Bar Street regulars Nana (Chrissie Chau, “Journey to the West”) and Julia (Liu Yan, “Legend of the Ancient Sword”), who are already in Kit’s sinister sights.

Few movies draw a line in the sand so thickly as Master Z: The Ip Man Legacy. The heroes and villains are sharply defined, with Kit being all bad all the time and Tin Chi having a perpetual look of innocence. The police are blatantly, brazenly corrupt and Dave Bautista (“Guardians of the Galaxy Vol. 2”) appears as an American businessman operating a local high-end restaurant and getting by thanks to the corrupt law enforcement, so we know he’s bad news too.

Kwan, who was once committed to a life of crime, finds herself on the other side of the line, now coming across as a decent person trying to keep the peace. Plus, she’s played by Michelle Yeoh, so she’s easy to root for. Kit and his army of henchmen make for enjoyably hateable bad guys, though, and what matters here is that Tin Chi has plenty of butts to kick, which Kit is stubborn enough to provide.

This franchise has always been at its most memorable when fists and feet are flying, which is to be expected, and Zhang is such an electrifying fighter that he effectively fills Yen’s large and vacated shoes. There’s an alluring and entertaining quality to the mild-mannered average citizen that suddenly explodes with fantastic fighting ability and it’s here that Zhang makes such an exciting impression.

He’s genuinely likable when not engaged in battle and absolutely mesmerizing when a fight comes his way. At one point, he teams up with Julia’s brother Fu (Xing Yu, “Kung Fu Hustle”) to take on a couple dozen of Kit’s men and the resulting scuffle is the movie’s best and most skillful sequence. Such situations involving an overwhelmingly outnumbered hero are common in martial arts movies (and there are several in this franchise alone), but the big battle here still manages to feel fresh and immediately impactful.

Considering the pedigree behind the camera, none of this should come as a surprise. Master Z: The Ip Man Legacy is helmed by Yuen Woo-ping, whose directing credits like the original “Drunken Master” and 2016’s “Crouching Tiger, Hidden Dragon” sequel bookend his iconic Hollywood stint as the fight choreographer of the “Matrix” trilogy and “Kill Bill” movies, among many other titles. Yuen also did the choreography for “Ip Man 3” and has now handed those reins to his experienced brother Yuen Shun-yi for this project.

With those two calling the shots, there’s some balletic wire-work, splendid spacial awareness, and a believable sense of danger that ricochets through each bout. Viewers will naturally be waiting for the next dose of action during the dramatic plot-building and the Yuen brothers do not disappoint in that area. They even throw in Thai superstar Tony Jaa for a quick cameo, just to further pile up the onscreen talent.

Like the movies before it, Master Z: The Ip Man Legacy plays to the genre’s strengths and gets by on charm during its quieter moments. There’s nothing particularly new or overly creative in its execution and it certainly follows a well-defined path. Zhang sure is fun to watch, though. Simplistic as the story is, this remains a reliable, respectful ride. Tin Chi can clearly break his opponents, but thankfully, he’s left the Ip Man legacy intact. 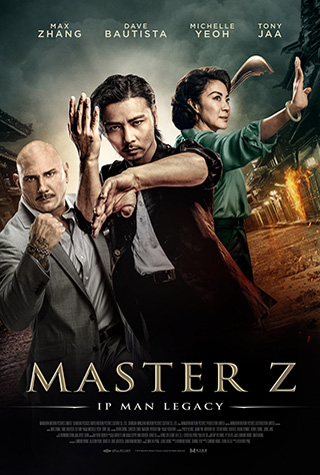