You don’t need to be rich or Asian to enjoy this film, but it helps if you are crazy. Unless you sneaked aboard NASA’s InSight Lander, you may have heard that John M. Chu’s (“Now You See Me 2”) satirical Crazy Rich Asians is the first Hollywood film since 1993’s “The Joy Luck Club” to feature a predominantly Asian cast. Fortunately, that is not the only reason it is worthy of our limited attention span, especially if you are keen on emeralds, tuxedos, champagne, and other fluffy distractions from politicians run amok and cheery end-of-the-world predictions.

Adapted by Peter Chiarelli and Adele Lim from Kevin Kwan’s international bestseller of the same name, the world of Crazy Rich Asians is not only abounding in opulence but also in ridiculously attractive stars such as Henry Golding (“A Simple Favor”), Constance Wu (“All the Creatures Were Stirring”) and Gemma Chan (“London Fields”), among others. Happy is what is reflected on Rachel Chu’s (Wu) face when her boyfriend Nick Young (Golding) asks her to go with him to attend the wedding of his friend Colin Khoo (Chris Pang, “I, Frankenstein”) and his fiancée Araminta (Sonoya Mizuno, “Annihilation”) in Singapore and (not incidentally) also meet his family.

Little does Rachel know, however, that she is about to confront a real-time version of “Lifestyles of the Rich and Famous.”

Reality dawns on her when, instead of squeezing into seat 37D on the airline, she finds herself lounging in silk pajamas in a private first-class suite that Nick explains away as a perk resulting from his family connections, the extent of which the unsuspecting NYU economics professor is soon to find out. To make the goings-on more real, Nick gives Rachel a primer on certain members of his family. Among them are Nick’s brother Edison (Ronny Chieng, “The Daily Show” TV series), a functionary in the family business, and his wife Fiona (Victoria Loke).

There is also cousin Astrid (Chan), who has some issues with her husband Michael Teo (Pierre Png, “Nothing to Lose”), and his “cheatin’ heart” and Colin’s friend Bernard Tai (Jimmy O. Yang, “Patriots Day”), the brains behind the groom’s gaudy bachelor party held on a cargo ship in international waters. Also getting in on the sub-plot thing is Nick’s vengeful ex-girlfriend, Amanda Ling (Jing Lusi, “Survivor”), but this one goes nowhere. Nick and Rachel are warmly greeted when they arrive in Singapore by Colin and his fiancée. It is not until the next day, however, when Rachel meets her supportive but decidedly over-the-top college roommate Peik Lin Goh (Awkwafina, “Ocean’s 8”) that she finds out just how wealthy Nick really is.

Given a tour of the family’s answer to Versailles Palace, Rachel discovers the full extent of her boyfriend’s “old money.” Before she can say “count me in,” however, she is met with icy hostility by Nick’s mother, Eleanor (Michelle Yeoh, “Morgan”), not exactly Cruella De Vil but a proud woman who values tradition and status and would have probably had Shakespeare (the Stratford version anyway) wait in the vestibule during a 16th century literary gathering. Mom expected Nick to return to Singapore from the U.S. to assume control of the family business, but did not expect his partner to be quite the emancipated type.

It seems like Eleanor who wants only the best for her son has some serious considerations about his girlfriend’s family history and American-style values (read gold digger). It is only when Eleanor discovers some hitherto undisclosed information about Rachel’s family, however, that the ice hardens and turns into steel. While Crazy Rich Asians will never be mistaken for a film of profound meaning, it is more than the typical artificial Hollywood romantic comedy and brings unique warmth and humor to the table. Besides its entertainment value which is considerable, Crazy Rich Asians actually has a great deal to say about the conflict between a family’s plans for their children’s future and their offspring’s own sense of where they want to be headed.

The film especially makes us aware of the differences in values and the changing social norms between traditional Chinese families and Chinese-Americans. At any rate, there is a lot of fun, loud music, cheering, dancing, and the like to offset the serious mother-son drama of thwarted expectations. If nothing else, it is way better than the Food Network in offering tantalizing looks at some luscious dumplings. Add to that, the fact that Nick’s beloved grandmother Ah Ma (Lisa Lu, “2012”) tells Nick that she likes Rachel’s nose. Now that’s rich. 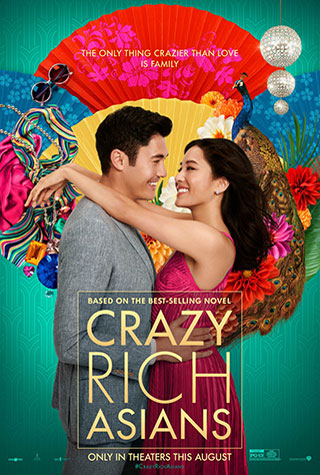