Maine spends the first ten minutes immersing the viewers in its setting. There is no dialogue, just the picturesque Appalachian Trail, the sound of the wind, and a woman (Laia Costa, “Victoria”) going about her business, which involves peeing in the bushes and fiddling about with sanitary products. The immersion in nature and its elements is decent enough, though nature here feels a bit tame. It looks like a fun bit of camping with songs and campfire games, as opposed to a man vs. nature setup. Perhaps physical danger is not a necessity, but if nature is to be a mirror for the lost, then they must look deeper to seek what they desire to find.

From the exposition, the film’s obsession with Costa’s body is revealed, with the audience treated to shots of her squatting derriere and later on, her underwear-clad bottom. It is clear that she is being treated as an object of desire, as opposed to an autonomous subject. She is saddled with a male companion (Thomas Mann, “Me and Earl and the Dying Girl”) who is obviously attracted to her, and she spends the film torn between giving in to her own desire for him or striking it out on her own — which was the way she began her hike. One moment she is ardently stating their non-couple status (much to his embarrassment), and in the next she is kissing him with equal fervor. Adding to all this is her enigmatic relationship with her absent husband, which spurs many a weeping moment on screen, though it is never clear what the contention is. This mystery hooks the viewer for a little bit, until it becomes explicit that caring for her character doesn’t really get us anywhere.

With names like “Bluebird” (Costa) and “Lake” (Mann), it feels all too allegorical and symbolic, especially when the two start rubbing their faces together in some kind of mating ritual. They are constantly on the verge of something, which creates tension and helps with the film’s pacing, since things can get a little slow as they trudge through the highlands. There is a playfulness to their coupling, which is pitted against the sobering reality that awaits. Their togetherness makes sense in this detached landscape, but not so much in the arms of “the real world.” While Lake is supportive and gives Bluebird what she needs, birds by nature are meant to roam free, not be attached to a body of water. Perhaps it is this desire for freedom that results in her constant fleeing from any male presence.

The ending moments of Maine cements this as a romance more than a quest for identity. Or maybe the pursuit of one culminates in the other. No one but writer/director Matthew Brown (“In the Treetops”) would know the answer. Unfortunately, the film doesn’t give enough for the viewer to feel a connection, so there is no investment on our part, just mere detachment and a “Oh, she’s back where she started,” before the embracing of a blank screen. 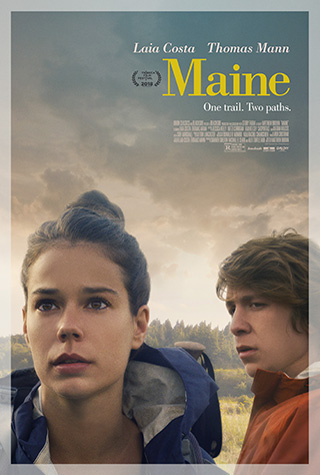