One of the main aims of a whodunnit mystery movie is to ensure that the audience doesn’t guess who done it, so by that metric, London Fields misses its mark entirely. It’s the rare movie that plays its cards so early that anyone paying even a sliver of attention during the first two minutes can probably figure out the precise twist that the movie drunkenly dares us to predict.

Guessing the ending right from the beginning didn’t save me the 118 minutes spent watching the whole movie, though, so perhaps it doesn’t matter. If you’re seeing this crap through to the end, just know you’ll be well aware of its crappiness long before the wrap-up.

Set in a near-future London where a vague conflict — depicted mostly through CGI fires in the streets — threatens to tumble society into some hazy dystopia, London Fields is the story of prototypical femme fatale Nicola (Amber Heard, “The Rum Diary”) and the multiple men that fall under her spell while trying to figure out what makes her tick.

Call it “Laura” for the 21st century, but only if you’re willing to ignore that “Laura” is a defining title of its genre and not a limp sliver of dreck. London Fields is immediately aware of its influences and origins in such a superficial manner that it tries unconvincingly to walk and talk like its predecessors, as if a child playing dress-up.

This is soft-boiled noir, silly and ridiculous and trying too hard to fake its toughness, dreariness, darkness. The plot meanders around its core conceit that Nicola has seen the future and knows that she’s going to be murdered very soon. The question of who the murderer is gets teased out by introducing a trio of suspects.

Nicola’s hapless suitors include a strung-out dart player (Jim Sturgess, “Cloud Atlas”) in deep with loan sharks, a bored banker with a blank stare (Theo James, “Underworld: Blood Wars”), and a dying writer (Billy Bob Thornton, “Bad Santa 2”) who is looking to pen one last meaningful novel. Nicola flirts with each of them and shows a different side of herself depending on who she’s entertaining.

That’s basically London Fields in a peanut shell: Scenes of Nicola being raunchy with Sturgess’ creep, then demure with James’ total square, then openly melancholic with Thornton’s ponderous author. Wedged in between these interactions are a darts competition, numerous ugly shots of the writer’s laptop screen as he labels each chapter of both book and movie, and a growling Johnny Depp (“Pirates of the Caribbean: Dead Men Tell No Tales”) playing a nasty, scarred gangster. If the movie wasn’t already bad enough without him, Depp definitely tips the scales. He’s as clownish as ever here, overstaying his welcome right from his first appearance.

The rest of the cast can’t claim to be much better, though. This is easily one of Thornton’s lowest lows, the terribleness of his performance compounded by memories of his great turn in the Coen Brothers’ noir homage “The Man Who Wasn’t There.” He’s doing the same stuff here in London Fields, playing a character accidentally caught up in a twisted plot and drolly narrating the experience, but now the material is moronic.

James is dull at best and Heard is practically plastic, but of all the main cast members, Sturgess at least appears to be having fun with a wildly wacky shtick that involves stretching his face for the entire movie and even dancing through the rainy streets at one point. He’s the only one that appears to be aware of how bad the movie is shaping up to be and he wholly embraces the opportunity to steal the spotlight.

Eventually, London Fields mercifully reaches its conclusion and pitifully admits it’s as predictable as you always assumed it was. The end credits can’t roll soon enough. Looking back, it’s easy to see why Nicola is painted as such a tragic figure, she who is destined to die young, but if there’s a silver lining to be found here at all, it’s that Nicola is at least free of the loathsome nonsense that is her story. 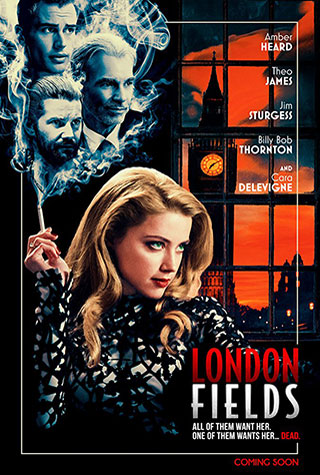