Directed by Belgian director Felix Van Groeningen (“Belgica”) and adapted for the screen by Luke Davies (“Lion”), Beautiful Boy is the heartbreaking story of Bay Area journalist David Scheff (Steve Carell, “Battle of the Sexes”), a devoted father who is relentless in his determination to save his son Nic (Timothée Chalamet, “Lady Bird”) from his addiction to the potent narcotic Crystal Meth, but his powerlessness to effect change stirs up feelings in him of inadequacy and guilt. The film is based on David and Nic’s real-life story as told in two memoirs, “Beautiful Boy” and “Tweak” that describe the bright and articulate eighteen-year-old high school senior’s descent into a world of self-abnegation. Raised in an upscale home environment in Marin County, California, Nic did not lack for material or emotional support.

His only explanation for his addiction is that it was the best feeling he’d ever known, so he did not want to stop. The film, however, does not explore his emotional state any deeper and the impact on him of his parent’s divorce and remarriage remains unexplored territory. It is clear, however, that there was a void in his view of the world that he was unable to fill in socially acceptable ways. David, a writer for Rolling Stone Magazine, maintains the cool detachment of a reporter: Interviewing sources, gathering information and data on Crystal Meth, but no amount of scientific study can get through to Nic. In numerous flashbacks, we see Nic as a young boy and the close relationship he had with his father — sharing a joint together and surfing at a California beach where David loses Nic among the waves, only to spot him joyfully riding a big wave.

Some flashbacks are displayed as overlapping images of the past and the present that reveal the impact of David’s memories, but the timeline is often confusing. Though the main focus is on the father-son relationship, the film also makes clear the devastating effect that Nic’s addiction has on the whole family. David’s wife, Karen (Maura Tierney, “Semi-Pro”), their two children, Jasper (Christian Convery, “The Package”) and Daisy (Oakley Bull, “Thanksgiving” TV series), and ex-wife Vicki (Amy Ryan, “Bridge of Spies”) do not have much screen time but make their presence powerfully felt; Karen in a harrowing scene where she follows a runaway Nic in her mini-van, and Vicki when she refuses to follow her husband’s direction to let go of Nic and allow him to find his own way. How much the children know or understand about Nic’s condition is not addressed.

There is little plot and, while it can be frustrating to the viewer, the repetitive nature of abuse, recovery, and relapse that mark an addict’s roller-coaster ride accurately reflects the cycle that most addicts experience. For Nic, many avenues to recovery are explored but nothing takes hold, neither going to rehab, attending college, or having a relationship with girlfriend Lauren (Kaitlyn Dever, “Detroit”). One of the rare scenes in Beautiful Boy that breaks out of this cycle, however, is when David attends an AA meeting where he and Karen listen to the story of Rose, a distraught parent (LisaGay Hamilton, “Take Shelter”) who speaks with heartbreaking honesty about how she has had to disown her self-destructive child. It is a testimonial that moves them to tears, David fully comprehending that every fix Nic administers could be his last.

Both lead actors deliver passionate and committed Oscar-worthy performances. Steve Carell is sensitive and affecting in an understated way in his role as the beleaguered father, but he has a steely determination that belies his calm demeanor. As Nic, Timothée Chalamet delivers the same nuanced, emotionally mature performance that marked his Oscar-nominated role as Elio in “Call Me by Your Name.” In a powerful scene in a café that the young actor handles with exceptional skill, David asks Nic, “Who are you?” and the boy lashes out at his father “I was this amazing thing,” he tells him, “your special creation, and you don’t like who I am now,” suggesting not too subtly that his father’s motivations may include feelings of embarrassment.

Beautiful Boy succeeds in offering an honest and authentic depiction of how the scourge of drug addiction can affect, not only the life of the addict, but an entire family and community. Groeningen’s choice, however, to mainly focus on the effect of Nic’s addiction on those around him rather than on the physical and emotional depths to which he has fallen dilutes any deeper emotional connection we may have to his character. Ultimately, the film’s willingness to play it safe and avoid taking risks in both style and substance limits our ability to feel the full extent of the pain. 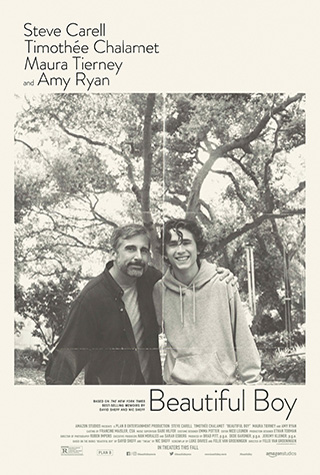