“The universe is made of stories, not of atoms.” — Muriel Rukeyser (Poet and physicist)

Liyana, directed by the Swaziland-born husband and wife team of Aaron and Amanda Kopp, is a genre bending documentary that follows a small group of Swazi children — residents of Likhaya Lemphilo Lensha, a Swaziland orphanage — as they participate in a storytelling workshop. Swaziland has a particularly egregious orphan problem because of the country’s high incidence of AIDS-related death.

With the help of South African storyteller, author, and anthologist Gcina Mhlophe, the children — a half-dozen boys and one girl — collectively initiate and give shape to a story structured along the lines of the hero’s journey. It features a Swazi girl Liyana who sojourns across a forbidding landscape to find her younger siblings in order to rescue them from kidnappers. The Kopps luminously interlace the documentation of the storytelling process with an animated rendering of the narrative, which combines storybook visuals with African traditions and culture. The aesthetics of crosscutting the documentary with the animation proceeds seamlessly. The animated “film within a film” created by Nigerian-born artist/animator Shofela Coker and South African composer Philip Miller (“Where Is Kyra?”), seems an extension of the children’s vision rather than simply an interpretation of it.

Although a formal analysis of Liyana can be helpful in understanding the film’s unique structure, it cannot convey its depth and beauty. It is not only a film about an enthusiastic group of young storytellers. It is a celebration of the creative act; the power of the imagination when given a chance to flower; and the potent connections among storytelling, the human experience, and culture. The film is successful in presenting these themes, in part, because of the involvement of a large number of African creatives and producers, including Executive Producer, British-Zimbabwean actress Thandie Newton (“Solo: A Star Wars Story”).

What truly makes Liyana riveting is observing the children’s enthusiasm and creativity, which come to life as they explain the story to the audience. There is magic and excitement in their eyes and gestures as they describe a battle between Liyana and a cave-dwelling monster, or the hazards Liyana and her companion (a giant bull) face in order to fulfill their quest. Their passion palpably illustrates the power of storytelling and its ability to give organization to the depths of emotion. Equally revealing is how the experiences of the children shape the narrative. For example, Liyana’s problems begin when her father dies of AIDS.

Liyana is that rare film that, stealing a phrase from Horace, operates in both the aesthetic and instructional domains. Among its lessons for the viewer are the importance of the imagination and the natural impulse for creation that can be stimulated with the help of an empathic guide and teacher. The film is also a testament to the significance of the expressive arts in education. Of course, it’s impossible to predict how deeply or long lasting this positive experience of storytelling will be in these children’s lives. But it’s certain that the possibility is far more likely with it than without it. 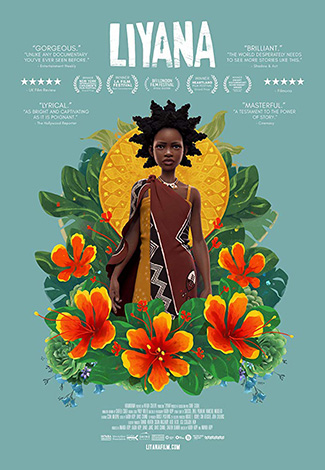