Grass is a symbol of renewal in Korean director Hong Sangsoo’s latest film, simply titled Grass, his fourth in the last twelve months. Only 66 minutes in length and shot in black and white by cinematographer Kim Hyungku, the film is set in a quiet Seoul café where the camera intrudes on conversations that begin with pleasantries but soon devolve into darker areas such as suicide, drinking, and loneliness. Fragments are built upon fragments as the ensuing conversations overheard at different tables evoke a sense of alienation and an unbridgeable gap between people. The film opens with the budding of potted plants as we bear witness to blades of grass pushing through the soil and emerging into the light.

Perched at a corner table intently typing on her laptop is Areum (Kim Minhee, “The Handmaiden”), a young woman who is openly eavesdropping on the conversations and recording notes of what she hears. When asked about the kind of writer she is, she says that she is not a writer, just someone who writes. In the background we hear the music of Schubert, Pachelbel and other classical composers preferred by the café owner who apparently also likes “Oh, Susanna,” Stephen Foster’s blackface minstrel song. The camera then shifts to Mina (Gong Minjeung) and Hongsoo (Ahn Jaehong, “Queen of Walking”), former lovers sitting at a booth together.

Mina tells the man that she is planning a trip to Europe which turns out, however, to be fanciful. Their conversation then takes a dark turn as Mina’s voice rises as she accuses Hongsoo of being responsible for their friend’s suicide. A blame game follows filled with mutual recrimination until the woman realizes that she also bears some responsibility for the friend’s death. Other conversations follow but it is unclear as to whether or not they are taking place in real time, or even if they are occurring at all outside of Areum’s imagination.

We listen to Sunghwa (Seo Younghua, “After My Death”) being blamed for the suicide of a well-liked professor, overhear an aging down-on-his-luck actor (Kee Joobong, “The Day He Arrives”) attempting to persuade an older woman to find room for him to stay in her apartment, and listen to a filmmaker (Jung Jinyoung, “Pandora”) being rebuffed when he asks writer Jiyoung (Kim Saebyuk, “The King of the Border”) if she would join him on a ten-day writing retreat. “Writing should be done alone,” she tells him, “trying to merge your thoughts with another person is not so easy.” The conversations are short and we only see glimpses and snapshots of people, learning next to nothing about their background or what they are really like.

We watch a woman repeatedly ascend and descend a flight of stairs, as if we can never escape the loop we are stuck in. Through it all, Areum duly records these conversations adding some snarky comments in voiceover about each person she observes. She only leaves her laptop long enough to have lunch at another café with her brother Jinho (Shin Seokho) and his girlfriend Yeonju (Ahn Sunyoung, “The Railroad”) whom he is thinking about marrying.

Seemingly out of character, Areum lectures the two lovers about rushing into marriage, telling them in a harsh tone that they do not know each other well enough to get married. “Loving each other? What bullshit!” she storms. There is a shift, however, as the film revisits the characters we have already met to discover that (over a glass [or glasses] of the Korean popular drink Soju) the deeper we probe the more we discover people’s capacity for forgiveness and reconciliation. With Grass and in the space of only one hour, Sangsoo allows us to reflect not only on what we can know about people, but on the things we can never know. 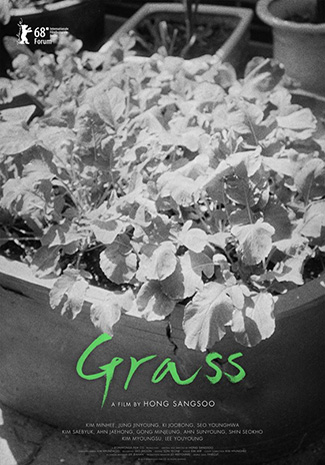