Keegan-Michael Key and Jordan Peele have charmed audiences since their early days on the sketch comedy show “MadTV,” but it was their critically acclaimed Comedy Central show “Key and Peele” that would propel them to new comedic heights. The intuitive writing of Jordan Peele, matched with the natural improvisation of Keegan-Michael Key, provided original content that was unseen (or at least rarely seen) in the comedy genre. It’s this cliché defying (mostly) content that carries over into their buddy film debut film, Keanu.

The film also carries a similar tone to their break-out show in its format: An open, easy going script filled in with carefully crafted spontaneity and culturally appropriate antics that will amuse its diverse audience. The jokes are as crisp as the chemistry between these two as they emulate subtle, exaggerated versions of themselves. Clarence (Key, “Vacation”) being a corny middle-class family man, desperate for an exit out of the constant loop that is his life. While Rell (Peele, “Wanderlust”) is quite the opposite, a pot smoking underachiever fresh off of a break-up.

Once the odd pair are brought together and effectively explained, we are introduced to the plot pusher of the film: An adorably talented kitten named Keanu that journeyed from the territory of a ruthless drug ring to the doorstep of a broken-hearted stoner. Its stay at its new home is brief though, as the cat is taken (while, coincidentally, the guys are out to see a Liam Neeson movie), causing Clarence and Rell, upon their return, to decide to hunt down the ones who took Keanu in the nicest way possible. Unfortunately, those that have Keanu aren’t exactly approachable, so the two have to transform using what the two comedians have labeled code switching. That is changing behaviors to suit a particular situation. If those that stole their kitty are “bangers” then Clarence and Rell will adopt their own “gangsta” personas.

While this concept does provide most of the film’s laughs, brief moments provided by supporting cast members keep Keanu from getting stale. Will Forte (“Nebraska”) offers a creative cameo as a drug dealer, Anna Faris (“I Give It a Year”) plays her hilarious self, and even the film’s title character makes a surprising contribution. There are also some decently shot action sequences and a soundtrack that would impress both hip-hop fans and George Michaels’ groupies alike.

Mostly, however, it’s the comedic performances of the co-stars that give the film a much needed transition from what could have been an overdose of Key and Peele. As mentioned, the comedic tone of Keanu mostly consists of the comedy duo staying in their comedic realm of comfort, instead of daring to go to new heights. While I’m not considering this an intrinsically bad thing, for fans of the talented comics this can make the film feel very much like a 98 minute sketch from their now-ended show. Obviously for those unaware of what these guys do, the film will be a refreshing take on the buddy adventure film not so unlike the outrageous escapades of Harold and Kumar.

No matter which side of the fence one falls on, there’s rarely a moment where the two — with the help of their supporting cast, which also includes Method Man (“The Sitter”) and Tiffany Haddish (“Patterns of Attraction”) in more prominent roles — fail to get some sort of laughs from the audience.

So while Keanu doesn’t push the bounds of its stars, it’s still naturally light-hearted, and effortlessly silly and fun. And in a day and age where everything is overthought and overproduced, a movie that critical analysis almost feels unnecessary (it’s guys pretending to be thugs to rescue a kitten, after all) is a most welcomed one. Jordan Peele and Keegan Michael-Key have successfully parlayed their talents to the big screen, hopefully it’s just beginning of good things to come. 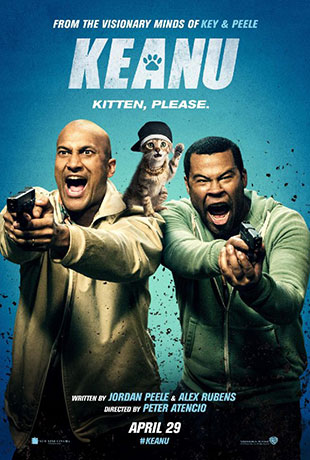