The best thing about the social-networking site Facebook is that you can practically say anything you want as long as you add “lol” at the end. Failing to add this very important acronym results in comments such as these, which were literally copied from my own Facebook account (however, I corrected them for grammatical issues/spelling):

“You’re a complete dick; I can see why you can’t get any fucking girls.”

“I can’t wait for the day that you commit suicide.”

Interestingly enough, the actual rise of Facebook, to the phenomenon that it is today, was just as hostile as the aforementioned comments, as made evident by director David Fincher and screenwriter Aaron Sorkin’s latest film The Social Network. The film, based off of Ben Mezrich’s novel The Accidental Billionaires, uses two different lawsuit depositions as a framing device and offers a multi-perspective approach to narration. The manner in which it is told, was a smart move by Sorkin, as the script is near perfect.

Initially set on the Harvard University campus, The Social Network follows Mark Zuckerberg (Jesse Eisenberg, “Zombieland”), a neurotic, sarcastic, pompous asshole who doesn’t have trouble telling his girlfriend (Rooney Mara, “A Nightmare on Elm Street”) that she isn’t fit to join Harvard’s “final club” (an undergraduate social club for Harvard’s elite, in which ecstasy and drunken sex are plentiful). The thing is you can’t just go in with a fake ID or claim that you know someone to get in; no, you need to do something absolutely mind-blowing and get recognized before you’re even considered to be one of the members.

This event is Mark’s big-break and though he faces disciplinary trouble with the school council (he hacked the Harvard directory to get the pics and info on the contestants), he meets the Winklevoss twins (Armie Hammer, “Mirror Mirror” and Josh Pence, “Gangster Squad”), a duo of text-book douchebags who want to hire Mark for a website that they’ve been planning — a social networking site that promised to transfer the entire experience of college right onto your personal computer. This would turn out to be the inspiration for Zuckerberg’s own website, TheFacebook.com, whose popularity spreads like wildfire.

Of course, Zuckerberg’s stint pisses off a lot of people and he eventually gets sued by both the Winklevoss twins who claim “intellectual theft” and Eduardo Saverin (Andrew Garfield, “Never Let Me Go”), Facebook’s co-founder and Mark’s best and only friend. From this point on, The Social Network uses a combination of flashbacks and flashfowards in order to move the narrative along. This method usually dislocates a film’s pacing but Sorkin avoids any such problems.

Jesse Eisenberg is an excellent Mark Zuckerberg simply because he was so absorbed with his character. Everything from Zuckerberg’s sarcasm, cynicism, and rude demeanor is played so naturally by Eisenberg, who is a bit of a black sheep in Hollywood, and is usually referred to as a Michael Cera clone. In a way Zuckerberg, who is a very conflicted character, reminded me of Gordon Gekko from “Wall Street” fame in his callous and calculating persona. Aaron Sorkin does an excellent job at making Zuckerberg likable enough, while still portraying his demons. I also thought that Eisenberg sounded like Zuckerberg and his fast-paced style of reciting lines really mixed well with the character.

It’s very surprisingly that the other standout performance is actually by Justin Timberlake (“Alpha Dog”), who plays Sean Parker, the cocaine-using and womanizing creator of Napster, who signs onto the Facebook project. Parker serves as a sharp contrast to Zuckerberg and serves as a bit of a devil on Mark’s shoulder. Zuckerberg, who is easily intoxicated with the life of the social elite, quickly befriends Parker, who though charismatic, never shakes that feeling of sleaziness — it’s almost as if you want to trust him but you wouldn’t be surprised if he stabbed you in the back.

Fincher’s impressive direction also deserves recognition. The Social Network is his best film, no doubt about it. Everything from the way it is shot to the way it is edited makes absolute sense and nothing is misplaced or forgotten about. But as I mentioned before, Aaron Sorkin is the real winner here. His writing talents are impeccable and he masterfully mixes a healthy dose of mature humor with dramatic tension, great characterization, fantastic build-up, and an excellent climax — all of the staples of a fantastic drama. 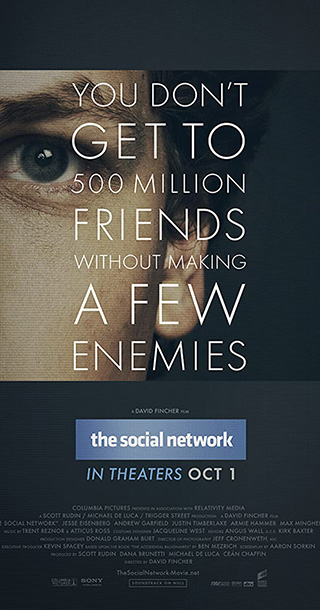