Alpha Dog is the true story of some wannabe, suburban gangsters who party their asses off, don’t have a care in the world and get themselves caught up in a kidnapping gone wrong when their fucked up “leader,” makes some very stupid decisions. And when I say stupid, I MEAN fucking stupid!

As I stated previously, the movie is surprisingly good. We’re transported back to the 1990s when big hair, gaudy jewelry and bright colored clothing reigned supreme. It is here where Johnny Truelove (played by Emile Hirsch) lives the good life dealing drugs (that his father supplies him [Bruce Willis]) and having, what we call today, a posse of hangers-ons. The “posse” as we would refer to them today are made up of Tiko (Fernando Vargas), Frankie (Timberlake) and Elvis (Shawn Hatosy). The movie then chronicles peer pressure and how people react when a douchebag like Truelove, in his infinite wisdom decides to kidnap the half-brother of a guy who owes him $1,200.

And here is how much of a motherfuck peer pressure and the desire for acceptance can be. These idiots, who are all living the American dream — big houses, bitches up to their ears, spending cash provided to them by their rich, hands-off parents — do the unthinkable for what they see as a necessary evil. And Jesus H Christ did I want to scream at them. But first I wanted to party with them! I sure as shit don’t remember my youth being quite so fun. Nor do I remember seeing every single girl in sight, being smoking hot! And they all get high and drink! I recall a few fun girls in the day, but shit, I sure would’ve liked to hang out with those bitches!

Sorry . . . back to the story — I wanted to scream at them as the story progressed, because you could see that things were going to go horribly wrong. Besides, I actually found myself liking the kidnapped kid, Zack Mazursky (Anton Yelchin). The 15 year-old doesn’t realize the grave danger he is in, because he is busy partying with his kidnappers. Hell, he is given ample opportunities to go, yet he believes in his brother to come and save him. Truly tragic. And what is truly painful to experience is the absolute fear going through this kid’s mind when he realizes he not going to be released as promised. He goes all the way to his grave thinking he is going to be saved and everything will turn out all right. Fucking painful.

But not so painful to watch was Timberlake. Playing a jazzed-up, wigger seems to come naturally to him. But, he did show some emotional range, when he is torn between doing the right thing (he tries to get the kid to go home, but never hard) and the wrong (allowing Elvis to shoot him). And the scenes between Timberlake and Yelchin in the mountains, as the boy is being taped up, are priceless. It hurts to think that this happened (or at least as told by the perps).

So I’ll say it again: Alpha Dog is surprisingly good. Good crowd of young actors and actresses and a sad, fucked up story. But there is a moral to it all — if you get kidnapped and even if your kidnappers are fun as fuck to hang out with, get the fuck out of there as quickly as possible! Your brother will not save you and 95% of the time you’ll end up dead. 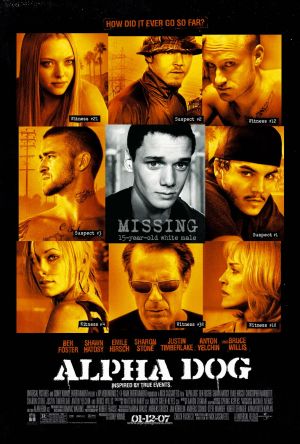