The word allure is defined as the quality of being powerfully and mysteriously attractive or fascinating. In the film Allure, formerly titled “A Worthy Companion,” Laura (Evan Rachel Wood, “The Ides of March”) fascinatingly conveys both power and mystery.

We first glimpse her inviting a random man into her home and into her bed. With him blindfolded and pantsed, she gets on top and begins aggressively humping him. She pins his hands above his head, covers his mouth, chokes him. Having likely responded to an online classified ad, I guess he is asking for it, though neither appears to enjoy the encounter. This is an act of aggression and dominance orchestrated by Laura, and it doesn’t look like her first time. With this inverted introduction to a complicated character, co-writers and directors (and brothers) Carlos and Jason Sanchez upend expectations of victimhood and predation.

Laura’s messy nights are countered with days spent cleaning houses for her father’s company. There is something so intimate about cleaning another’s home and given observational access to their lives and belongings. One such job brings her into contact with one such belonging: The 16-year-old daughter of her client. Eva (Julia Sarah Stone, “Weirdos”) is a bored high schooler who is tired of her mother controlling every aspect of her life. Laura compliments Eva’s piano playing (classical at her mother’s insistence), gets her high on the back stoop, and tells her she doesn’t have to do anything she doesn’t want to do. Laura is effectively grooming Eva. And when Eva is forced to move in with her mom’s new boyfriend, Laura at once convinces Eva to run away from home and then lures Eva into her own. Eva’s life is punctuated by loneliness — scenes of her eating alone in the cafeteria and practicing piano in solitude — and Laura represents an escape from that emptiness. Eva’s transformation is marked by new clothes (Laura’s hand me downs) and letting her previously ponytailed hair down. Laura’s modus operandi is well-drawn and alluded to. She seeks out relationships with younger women, choosing girls she can manipulate and control, capably convincing herself it is love. She exhibits classics signs of an abuser: Jealousy, blame-shifting, obsession. The film’s moral ambiguity and acrobatics come from the fact of her being a young, attractive woman — a picture that is usually reserved for the victim of this type of abuse, not the perpetrator.

Theirs is an abusive relationship that I haven’t seen portrayed on film before. There is a push and pull as each takes her turn between being dominant and submissive. The shifting power dynamic is exhibited in shot blocking. In the beginning, Laura stands in doorways or the bottom of stairs while Eva sits. Laura looms over her from a position of power. Later, as Laura uses contrived vulnerability to further lure Eva into her web of lies, Eva takes the visual upper hand however fabricated or short-lived. Eva cradles an inconsolable Laura, who becomes childlike in her arms. Even Laura’s relinquishing power or control to Eva is a way of fostering their codependent relationship.

During an encounter with Eva’s mother, Laura learns that the police have stopped looking for Eva. She is deemed a runaway and no longer requiring of their investigative resources. Laura is bolstered by this news. They do not have to hide anymore. The mother’s lack of knowledge and candor in speaking with Laura is understandable. The obliviousness of Laura’s father is not. Wouldn’t he have been made aware of the fact that a young girl who lived in a house his daughter cleaned is missing. Given his daughter’s history or stalking, wouldn’t he find this coincidence the least bit alarming? Perhaps, on some level, he knows and is complicit in his silence.

Laura is the villain, but she is also a victim. Of what, we are not quite sure. The film shies away from Laura’s pathology and what in her past made her this way. There is some indication that her father (Denis O’Hare, “Dallas Buyers Club”), now her employer and repeated rescuer, has wronged her in the past. She unleashes various barbs, including finding him repulsive (a pointed and carefully chosen antonym in this case). He apologizes late in the film, and the obvious presumption is sexual abuse, but he seems truly shocked and wounded when Eva spats that accusation (along with actual spittle). It is a testament to Wood’s talent as an actor that Laura remains a sympathetic character and not a complete monster. She maintains her humanity despite all evidence to the contrary. Her high-risk behavior eventually catches up with her. Even though Laura exhibits predatory behavior in her relationship with Eva, her diminutive size and gender always position her as physically weaker and therefore disadvantaged in encounters with men.

Allure shows a woman capable of manipulating, gas-lighting and destroying lives, then flips the femme fatale narrative when she is viciously preyed upon. The film is particularly complicated as viewed through the current lens of the #MeToo movement, Kristen Roupenian’s viral short story “Cat Person,” and the blurred lines of “consensual” yet bad sex. Laura’s late-night encounters, and to some extent her relationship with Eva, have nothing to do with sexual desire or even pleasure. For what she desires in these scenarios is to be in control. And being in control, alluring as it may seem, is oft more dangerous and terrifying than simply submitting to the chaos of being alone. 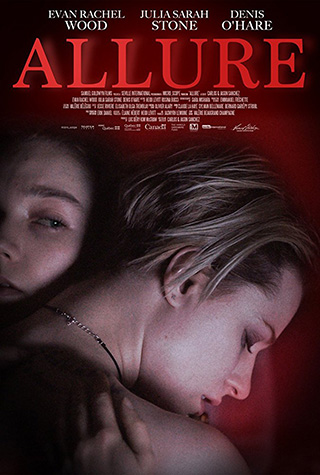