With a CRACK! that delivers aural and narrative impact, Red Sparrow lays out its cards early on. This CRACK! occurs during a ballet and highlights a key tension of such a performance — any mistake can be disastrous. In this case, the incident involving the CRACK! does prove devastating and foreshadows the ruin to come.

This ruin swirls (or trudges) around Dominika Egorova (Jennifer Lawrence, “Passengers”), a young woman caring for her ailing mother Nina (Joely Richardson, “Snowden”) in Moscow. Occasional visits from creepy uncle Vanya Egorov (Matthias Schoenaerts, “Far from the Madding Crowd”) hint at wider circles, and when events take an unfortunate turn, he is quick to offer assistance for a price. Trapped between poverty and a chance to continue her mother’s care, Dominika agrees and finds her life, autonomy, sense of morals and identity rapidly annexed and co-opted by the state.

Redesignated and redesigned as a “sparrow,” Dominika learns a very particular set of skills under the cold tutelage of Matron (Charlotte Rampling, “45 Years”), before undertaking a mission in Eastern Europe involving CIA agent Nate Nash (Joel Edgerton, “It Comes at Night”). Meanwhile, Vanya and other sinister high-ups in the Russian Security Services, including Director Zakharov (Ciarán Hinds, “Silence”) and General Korchnoi (Jeremy Irons, “The Man Who Knew Infinity”), discuss matters indirectly while sitting in opulent offices that contrast with the stark brutalism of buildings in exterior shots.

Contrast is a conceit that runs throughout the film, as opulence is frequently shown to be a facade, gentleness gives way to violence, tables rapidly turn and no one is to be trusted. A ballet hall with a grand entrance and spectacular auditorium also features shabby dressing rooms. An apartment block with forbidding bars conceals comfortable lodgings. A plush hotel for discrete liaisons becomes a site for shocking violence. And, of course, the seemingly demure Dominika also possesses strands of steel.

Dominika’s arc is a familiar one within spy cinema, especially those focused on women. All is to be sacrificed to the mission; skills for manipulation and seduction are paramount; personal modesty and pride are a distant memory; give the target what he wants so as to extract what you want. Red Sparrow does little with these generic tropes: The training sequences largely consist of speeches by Matron and some cold nudity that is (intentionally) non-erotic; when spies meet they immediately know what the other is so there is no dramatic irony. Red Sparrow declares its distinctiveness by being unashamedly nasty. The violence is brutal, the physical injuries apparent, while sexual violence as well as torture receives a level of attention likely to make the viewer uncomfortable. For release in the United Kingdom, the distributor requested advice on how to secure a 15 rather than 18 rating, and trimmed one scene of sadistic violence to secure the less restrictive certificate. The film still, however, remains a top end 15 or R, as it does not shy away from pain and suffering, whether that comes from swinging sticks into jaws, thrusting organs into the unwilling or applying sharp metal to human skin.

Despite the potential to be a shocking and arresting piece of post-Cold War espionage, perhaps in the model of the similarly unflinching “Tinker Tailor Soldier Spy,” Red Sparrow is a disappointing dirge. The film continues the diminishing returns for star Jennifer and director Francis Lawrence (no relation). Their strongest collaboration was their first, “The Hunger Games: Catching Fire,” and the two subsequent “Hunger Games” films were increasingly weaker. Red Sparrow, a stodgy, confused mishmash of sex, sentimentality and sadism that offers more convolution than suspense, is hopefully as bad as their collaborations get. Much as “Live by Night” did with a period gangster film, Red Sparrow takes its compelling potential and fails to deliver in almost every respect.

In a way, it is quite impressive that Red Sparrow fails so completely. Cinema consists of multiple elements, and all need to work for the film to be engaging. Equally, if everything fails to work, the film is a slog that perpetually challenges the viewer to engage while offering little reason to do so. Such is the case with Red Sparrow, where story, direction, character, genre features and politics are handled with clumsiness that wastes a talented cast. The narrative has several distinct sections, but rather than flowing smoothly from one to the other — the establishment of Dominika, her training, her mission(s) and the subsequent developments involving Nate and her Russian superiors — each act clunks into place after the preceding one. Twists and turns feel forced rather than natural, while revelations are more eventual than sudden. Directorially, the film fails to immerse the viewer, the pace of the editing and motion of the camera sluggish and lacking momentum.

While it is arrogant and presumptuous for any viewer, and especially a critic, to suggest that we might know better (not that that stops us), I cannot help but wonder if a flashback structure might have helped. In similar films such as “Tinker Tailor Soldier Spy,” “The Debt” and “The Good Shepherd,” past and present are blended in such a way as to suggest the legacy of trauma, a narrative strategy that seems highly relevant to Red Sparrow. Dominika‘s journey is one of steadily worsening situations, and her adaptation to the increasing cruelty of her world. Perhaps it would have been more interesting if we were introduced to the almost-fledged sparrow and then saw how she gained her skills and lost her soul through flashbacks. As it stands, even the politics of the scenario — such as the degradation and potential reaffirmation of women — are lost in the lethargy of the film as a whole, which largely clogs strong performers.

While it is pleasing to see J-Law continue to take on adventurous roles, she did finer work in “mother!.” Rampling’s Matron echoes her similar character in “Never Let Me Go,” while Edgerton is a generically familiar agent type. Despite the rather distracting faux-Russian accents — as also heard in “Child 44” — all the performances are fine, but the story is convoluted to the point of being contorted, and the direction fails to energize the twists of the tale. Furthermore, the character relationships prove to be contradictory, the generic features are handled hamfistedly and the politics get lost in the mix. Overall, Red Sparrow is a big disappointment. 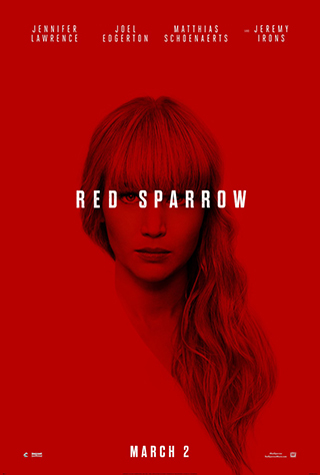