As rendered in the gut-wrenching “Krisha,” director Trey Edward Shults’ debut film, those with blood ties are hornets that can sting more than their natural counterpart.

The within-is-more-volatile notion is elevated in Shults’ second outing, It Comes at Night, that takes place in a world upturned by an unnamed disease. For a while now, 17-year-old Travis (Kelvin Harrison Jr., “The Birth of a Nation”) has seen his parents, Paul (Joel Edgerton, “Midnight Special”) and Sarah (Carmen Ejogo, “Alien: Covenant”), ensuring nothing will bother the house, including disposing of his infected grandfather (David Pendleton, “Begin Again”). The crude cremation sequence, also the film’s opener, is the first of many occasions where Shults exercises a kind of dread that is in its purest form and almost bacterial, one that the innards conceive and spreads gradually. It is better than the external “gotchas” that are loud in volume and regular in deployment.

It is the first time where danger is shown to be already in the house, too.

And insightful is the more, if not most, fitting descriptor for this chiller, which is riskily marketed as horror. To be fair, it is difficult to avoid the lure when the hallmarks of a zombie or cabin-in-the-woods film are here and clear. It Comes at Night is a chamber piece where the shivers are human-based after all, the byproduct of anxiety rather than unnatural forces. The film also uncovers its next beat after a session looking inward, diving into Travis’ head and seeing his latest worries manifest as fleeting-but-disturbing nightmares of either the outside world or the new set of survivors — a young family of three, Will (Christopher Abbott, “Martha Marcy May Marlene”), Kim (Riley Keough, “Mad Max: Fury Road”) and their taciturn toddler Andrew (Griffin Robert Faulkner) — whom his father has agreed to shelter after a tense encounter.

Physically and cerebrally, the outside world continually breaches the house. Shults wisely spends more time using Travis as the audience’s surrogate and magnet for happenings as, like the house, he is unsettled. Age-wise, the character is trapped between mature — like Paul or Will — and not yet so — like Andrew. Responsibility-wise, he can’t be a protector, father and leader to the ladies (or anyone) yet; it is still listening to commands, resorting to sneaking (or voyeurism, on two occasions) or widening the worldview only through the mindscape, allowing vulnerability, defeat or frustration to ferment.

Being in limbo is also an approach that Shults embraces often to visualize his screenplay, deliberately obscuring the means to resolve any uncertainty viewers might have. The dog barks, but nothing is visible in its direction. A piece of information is uttered, but that could be untrue. The usually locked, eerie red door — which Paul said is the only access point — is found flung open one night, but no one inside the house said they had meddled with it. The cabin fever gets more intense as the film creeps forward, and in terms of temperature the heat is most oppressing to those indoors — the families in the house, us in the auditorium.

It is refreshing to see how minimalist filmmaking can cause so much activity, for example how the eyes will grow more alert when Drew Daniels’ camera gracefully traipses through the darkened walls and forest. That said, the sparseness of Shults’ world unearths certain flaws although this is a cast that can thrive with only modest givings. The story, with its enclosed vision, tends to recycle its beats. Tension from a more affecting source, the nightmares, easily dissipates since what causes it is imaginary. Certain uncertainties, sometimes emphasized, don’t pay off at the close. But other than the latter, Shults make the repetition and false pressure work for the film, enlisting both to build a realistic apocalypse where the deadlier things are what one can touch and be exposed to everyday. In the case of It Comes at Night, it is the reflection of oneself.

That might be why the characters’ optics are always prominent, even with gas masks on. “Windows to the soul,” as the saying goes, and the soul always knows what is true. 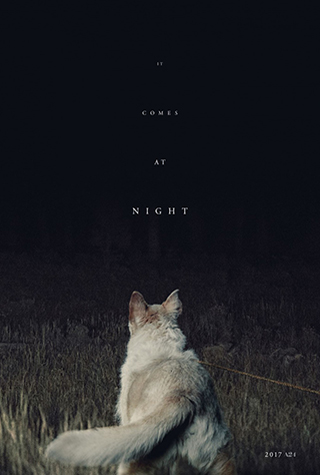