There are more coming-of-age films than masterpieces in the Louvre, but there are only a handful of them that have stood the test of time, even though teen-speak changes over the years. First-time Canadian director Andrew Cividino’s Sleeping Giant, an update of the short that won the youth jury prize at Locarno International Film Festival last year, may just join this select group. Winner of the award for Best Canadian First Feature Film at the Toronto International Film Festival, it is the story of three very different teenage boys during a summer vacation in Northern Ontario. It is not a comedy about lovable misfits such as “Kings of Summer,” but an expression of growing up in all its reality and in all its cruelty.

The film is set in the rugged area around Lake Superior close to lush forests and breathtaking mountain ranges, beautifully photographed by cinematographer James Klopko. The title refers to the huge rock formation near Thunder Bay known as Todd’s Cliff which was named after the individual who survived the 100-foot drop. The title, however, can also apply to the anger building in 15-year-old Adam (Jackson Martin), a slight, sensitive boy with a shaky self image. Adam, who does not seem to have an offensive bone in his body, is the odd man out in his collection of friends which includes cousins Nate (Nick Serino) and Riley (Reece Moffett). The boys are staying with their Grandmother (Rita Serino) but would not look out of place in a juvenile detention facility.

The cousins are tough, sarcastic, and funny, but troubled people who often seem numb to human emotion. Though the three live in different social and economic worlds, Adam seems content just to be included and his eyes seem to fix on Riley, a still abrasive but to this point somewhat saner version of his noxious cousin Nate. During a wrestling contest on the beach, a bloodied Adam hits his head on a rock but all Riley can say is, “Stop being a pussy.” Adam has come up to Thunder Bay with his well off parents, his mom and pseudo-hipster dad William (David Disher, “My Father and the Man in Black”) who knows all the right words to ingratiate himself with the teenagers.

When William invites Riley for dinner, Nate later has a ton of nasty and sarcastic things to say about parents, suggesting the reason why the boys are staying with their Grandmother. Riley is not adverse to stirring the pot either and, when he happens to glimpse Adam`s dad making out with Marianne (Erika Brodzky), a local fish market owner, he spills the beans to Adam who takes it very hard. The normally placid boy begins spying on the woman, and his personality takes on a harder edge as he joins the others in getting high and robbing a liquor store. Tension, jealousy, and confusion arise between the three boys, however, as Adam and Riley both set their sights on a local girl named Taylor (Katelyn McKerracher), though for Adam she is “just a friend.”

Though much of time is spent with innocent pleasures such as playing board games, walking in the woods, jumping into the water from rocks, or wrestling, there is a sense of foreboding hanging over the film that shifts the mood quickly. For example, when the fun of playing a board game triggers a reaction from Nate, it leads to a bloody brawl and when a summer afternoon outing is darkened by the smashing of the carcass of a dead bird. It is only when the boys succumb to peer pressure and attempt to prove their manhood that things get so far out of hand that there is no back to turn to.

Unlike films with similar themes in which adults look back at their youth with nostalgia, in Sleeping Giant there is no looking back, only the immediacy and visceral impact of a powerfully real experience. Backed by the indie-rock sounds of Toronto-based Bruce Peninsula and an original score by Chris Thornborrow, brilliant performances by the three young men fully capture the lived-in quality of people coming-of-age right before our eyes. It is a film that feels as if you are watching it in real time and when the realization that our lives can change in an instant hits you in the gut, you wish it was just a movie rather than a familiar experience. It is one of the best films of 2015. 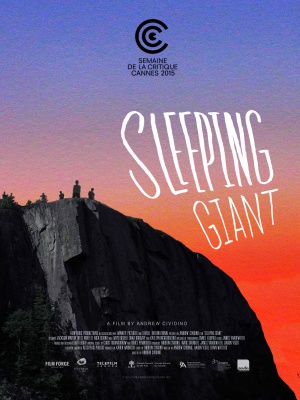