“For if the darkness and corruption leave a vestige of the thoughts that once we had. Better by far you should forget and smile than that you should remember and be sad” — Christina Rossetti

CalArts Professor and film essayist Thom Andersen, acclaimed for his 2003 documentary “Los Angeles Plays Itself,” has brought his latest work, The Thoughts That Once We Had to the Vancouver International Film Festival much to the delight of those in attendance. The title of the film is derived from the 1862 poem, “Remember” by Christina Rossetti and is inspired by the cinematic theories of French philosopher Gilles Deleuze who saw cinema as “the space where thought can be produced.” Spanning a century of film, the essay is divided between the classic and modern eras of cinema, separated by documentary footage of World War II, the Korean War, and the war in Vietnam, representing contrasting film techniques and genres and mirroring Deleuze by dividing the film into the “action-image,” the “time-image,” the “affection image,” and “the movement image.”

Identifying the films shown on screen can be a challenge but it can also be a fun exercise for those familiar with the cinematic icons of the past. Though there is no narration in the film unlike “Los Angeles Plays Itself,” uninterrupted music from the classics to the blues are present throughout, though some music is difficult to relate to what is being seen on the screen and seems to be there only because the director likes it. Andersen said, “I didn’t want to make this film for people who are familiar with Deleuze’s texts.” While there are quotes from Deleuze’s writings throughout the film, whether or not you can grasp their meaning is not relevant to your ability to enjoy the film.

“Also, as a general rule,” the director said, “films should have humor in them,” and this one has plenty of laughs especially in scenes from Harry Langdon, Charlie Chaplin, Laurel and Hardy, and the Marx Brothers (“Duck Soup”). As Andersen takes us from montage to montage across decades and genres, it is obvious that the film clips chosen were not only selected to make an academic point but are some of Andersen’s favorite scenes and reflect his lifelong passion for the movies. Included are clips from famed directors D.W. Griffith, Jean-Luc Godard, Hou Hsiao-hsien, Masahiro Shinoda, Aki Kaurismäki, Pedro Costa, Jia Zhangke and Alfred Hitchcock as well as iconic scenes from the careers of Humphrey Bogart, Marlon Brando, Marlene Dietrich, Greta Garbo, Mary Pickford, and others.

One of the most moving sequences is the archival war footage that include devastating scenes from the German blockade of Leningrad, the U.S. bombing of North Korea where two million North Koreans died during the Korean War marked by titles in block letters: “No repentance, not even an acknowledgment.” Equally poignant are scenes from Alan Resnais’ “Hiroshima Mon Amour.” Here, rather than showing the characters speaking lines such as “You saw nothing in Hiroshima. Nothing.,” Andersen displays the words on the screen as intertitles in big bold letters to complement the images.

The film is also a musical and we see Chubby Checker singing his 1960 hit “The Twist,” as well as songs from Maurice Chevalier, The Beatles, Marianne Faithfull, as well as exotic snake dancing by Maria Montez and Debra Paget. The Thoughts That Once We Had is not just an exercise in creative nostalgia but a reminder of the power of cinema to move us, inspiring us to see a world out there larger than our limited vision. As the film ends with the song “As Tears Go By” sung by Marianne Faithfull from Godard’s “Made In U.S.A.,” the director, optimistic about the future of cinema, quotes Deleuze proclaiming the hope that cinema can restore a “belief in the world.” “To those who have nothing,” he says, “must be restored . . . the cinema.” The Thoughts That Once We Had is a boon, not just for cinephiles but for all who love the thrill of great cinema. 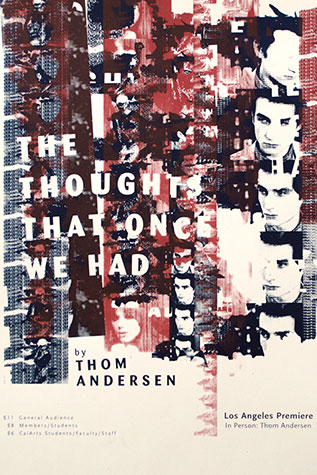