Thoroughbreds has completely reinvented the concept of a haunted mansion, having mercifully put the former out to pasture and out of its misery. This particular mansion is home to Lily, a polished upper-class teenager with a fancy boarding school on her transcript, a coveted internship on her resume, and a penchant for short shorts and impeccable accessorizing. By all counts, the trappings of her comfortable life are worth envying. This is highlighted in a magnetic scene in which local drug dealer and potential hitman, Tim (Anton Yelchin, “Star Trek: Beyond,” who tragically died in 2016 and to whom the film is dedicated), drops by for a meeting of the minds. “Ave Maria” plays as he takes in the grandeur of the grounds, which require not one but two riding lawn mowers working in alternately angled unison. An extra wide-angle lens is necessary to capture the entirety of the monstrosity, which is then followed by seductive close-ups of his tattooed hand stroking the shiny curves of a classic red sports car. Thoroughbreds is hardcore lifestyle porn and Tim is getting off.

But such trappings have inevitably become a prison for Lily, and one of her stepfather Mark’s making. Following the death of her father, she (and her mom) are beneficiaries of Mark’s wealth, yet also confined by it. He forces decisions upon them without their consent. They are spoken to, not in conversation with. Their lives are not theirs to control. Mark (Paul Sparks, “Midnight Special”) creepily materializes throughout the house, juicing greens before retiring upstairs where the pulsing whoosh of his rowing machine can be overheard in each and every room. Taking a page from Blumhouse Productions, the film is almost entirely set in this house. The geography and limits of its sprawl provide a map of Lily’s psychology. The sense of being trapped there is a microcosm of the sensation of being trapped in her life. In a bizarre twist of fate, Amanda finds freedom in her imprisonment.

Amanda, Lily’s former friend and recent tutee, intuits Lily’s hatred for Mark and offhandedly suggests they kill him. What transpires is whip smart, darkly funny (“What am I going to tell my dad?” “Wear a hat.”), surprising, and surprisingly entertaining. Amanda is shown playing online poker and oversized chess. She doesn’t have a tell because emotions do not register across her face or body. “I don’t have any feelings. Ever . . . It just means I have to work a little harder to be good.” But what is truly revelatory is how self-possessed and transparent she is, always saying exactly what she means. By contrast, Lily almost never says what she means. She’s a Westchester WASP, who, while she may feel things, never talks about what’s bothering her. Even Mark has adopted the robotic mantra of “I’m fine. I’m fine. I’m fine. I’m fine.” The film offers Amanda’s diagnosis straight away, but Lily’s psychology is more opaque and mysterious.

I read that writer and director Cory Finley originally conceived of Thoroughbreds as a stage play, but then decided to tell the story with all the tools cinema affords. These playful flourishes are evident in Erik Friedlander’s score, pitch perfect musical cues, and Lyle Vincent’s camera work. Vincent makes slick work with a steadicam that effectively maintains unshakeable, observational distance from the characters, who are likewise coolly detached and disaffected. There are countless scenes in which the camera — as unmoving as their emotions — frames every character together in the shot, and then quickly shifts focal point and perspective pulling the background character into sharp focus and blurring the foregrounded character. It’s a brilliant cinematic touch that informs so much about how these characters perceive and relate to those around them.

Finley has created a teen film without any of the traditional markers of teen filmdom. Amanda and Lily — played to perfection by Olivia Cooke (“Me and Earl and the Dying Girl”) and Anya Taylor-Joy (“Morgan”) — are never seen attending school or visiting shopping malls. There is no gushing over boys or gossiping about losing one’s virginity. Instead, they are laser-focused on hatching a homicidal plot, establishing airtight alibis, and perfecting the fake crying technique. There is one high school party, but it serves only as a transitional setup to introduce a key third party into the mix. And yet, the movie still has something profound and honest to say about the teen experience, all the while deliciously satirizing said experience.

The film expertly plays with the horror of being a teenage girl and also the fear they seem to instill in others. Having been one (and now admittedly terrified of them), I can attest there is nothing scarier. The film is of course about wealth and ownership and the value society places on (animate and inanimate) objects, but is also obliquely commenting on the likelihood of every seventeen-year-old girl being a bit of a sociopath. Mark calls out Lily’s lack of empathy and inability to see someone else’s point of view. Everyone in her orbit is characterized as little offshoots of consciousness, and one could argue that lack of recognition of the personhood of others is more often an indicator of being a self-centered myopic teen as opposed to an actual mental health issue.

During test prep, Amanda quite rightly notes that whenever “ambivalent” is a choice, it’s always the correct answer. She also claims, “The only thing worse than being incompetent or being unkind or being evil is being indecisive.” Life is not always so definitive, but when it comes to this film, I’m neither ambivalent nor indecisive. What’s truly horrifying is just how much I loved it, and any dubiety surrounding my enjoyment comes from what exactly that says about me. Thoroughbreds for the win/place/show. 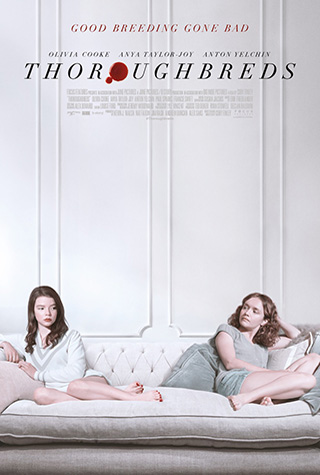