How hard it is to look at pure evil right in the eye? It is hard, very hard, mainly because, as Hannah Arendt very lucidly said, it is extremely banal. No apocalyptic Lucifer-like layouts, no tall teleologies or immense intentions; the people who do evil are brutally banal, practically plain — and they are of a different breed from the people who command it. Although the delusions behind this latter group have always been difficult to grasp, one thing has been clear throughout history: They seldom commit the crimes they command.

Upon the imminent release this July of Joshua Oppenheimer’s “The Look of Silence,” it is worth looking back and reflecting upon the work that started it all, his masterful The Act of Killing. This film is as hard to watch as it is important to look at. If hard it is to look at pure evil in the eye, harder it will be to have it restaged, re-enacted, recreated for the naked eye. And this, the act of denuding our eyes to atrocious actions without euphemisms, without the survivor’s or the victim’s voices, without repentance or condemnation . . . without consequences, turns this act of restaging mass murdering into a whole exercise on self-scrutiny.

The documentary takes place in Indonesia and centers on the figure of Anwar Congo, a self-proclaimed gangster (according to Indonesian popular philology, mythology, this word’s original meaning is “free man”) and a retired death-squad executioner who made his reputation during the year and a half that spanned from 1965 to 1966 in which between 500 thousand and 2.5 million people (all suspected “communists”) were murdered — and yes, genocide should leave us out of breath. Congo and some of his former colleagues (some retired as well, others still active as hopeful parliament members losing elections or paramilitary bosses collecting money from Chinese vendors) are planning to make a film that will tell the truth of what they did, their legacy coming back to the medium that first inspired their actions: Cinema. Unlike most countries, we find that these ex-executioners are prone to brag about their activities, which are celebrated by the current government and by its military and paramilitary (just about the same) institutions. They thus don’t have the social compromise of feeling remorseful. They need neither justifications nor excuses — and we don’t need them either, for we aren’t here to understand them, but to watch them.

And this is where Oppenheimer’s film fully finds its aesthetic prowess, in creating a space wherein the inconceivable is conceived, the unfathomable fathomed, and the unspeakable spoken . . . so banally, so trivially, even merrily. Because, indeed, if all these things were done, they were all conceived, fathomed and spoken in the first place.

It is at this point that we see where and how memory and imagination merge, history and fiction emerge, and fantasies and phantasms converge. As legendary documentarian, Errol Morris, wrote in an essay about Oppenheimer’s film (for which he also was an executive producer), this picture deals with “the unconscious residue [of] historical oblivion” (“The Murders of Gonzago”, July 10, 2013, Slate). And, nearly 3 years after the release of this work, we are able to see that, for the first time in a long time, the United States (completely complicit) has started an ongoing dialogue of a chapter in history that, outside of Indonesia, was almost non-existent. How can we forget a genocide of such proportions occurring in such a little time (between 500 thousand and 2.5 million people in less than 18 months)?

But the oblivion of which Oppenheimer reminds us is the one that starts in the perpetrator’s mind. If people like Anwar are celebrated in their country today, guests in talk shows and political rallies, it is precisely because they were who, in the first place, found a way to deal with their actions without succumbing to paralyzing penitence, shocking shame and/or plain psychosis. What is so appalling (never appealing) about this film is that we are granted a peek, an actual peek, at the heart of darkness only to find that “the horror” is not there, only “the banal.” And it is this banality that we find unbearable.

Another film master and documentary titan, Werner Herzog (who also got on board as executive producer), claimed that this film was the one true surrealist movie, the only one, to the best of his knowledge, in which surrealism actually works (see his July 2013 interview in Vice). Although I still think that most of Luis Buñuel’s work works (at a surrealistic level, if differently), I find Herzog’s words rather appealing (never appalling). To be sure, surrealism seems the only valid vehicle to realistically portray real, raw, raging rampage, the only possible procedure to realistically stage the act of killing. For this is what killing is for these executioners, an act, an act they further supplement with ideas they take from Hollywood’s films, from John Wayne to Marlon Brando and from Elvis Presley to Al Pacino. From some (i.e., Pacino’s films such as “Scarface”), they extract ideas and killing methods. From others (i.e., Presley’s films such as whichever) they extort the right mood, the happy boost they need before complying with the duties entailed by their job description.

The Act of Killing looks at a fantasy inside another fantasy inside another fantasy — and they all emerge, converge and discharge in massive mayhem. Id gone wild. The documentary is a making-of movie of the movie the perpetrators mean to shoot about their time together, that time when they were young and powerful — or so they felt. This creates a discomforting hall of mirrors in which the reflected, the referent is lost in images of a past that never was, a future that will never be and a present that should have never come about. The re-enacting scenes try to tell the truth about what they did and how they did it, but they end up fusing (and confusing) with the fantasies they stage (with the most stunning musical numbers you have ever seen) about the killings (i.e., the victims’ ghosts coming back to thank their killers for sending them to heaven). And in all these fantasies we see a lie inside a lie inside a lie inside a lie . . . reflecting and bouncing over a national discourse they repeat ad nauseam about the communists and about the discourse they have created so as to be able to live with themselves — sometimes even, as one of the perpetrators conclude, fully free of guilt. As this very insightful individual tells us (with all the cynicism he can afford being who he is): “History is written by the winners. I’m a winner, so I get to write my own history.”

This movie is neither to judge nor to better understand the perpetrators, or the genocide in Indonesia, or Indonesian history, or Indonesian fiction or politics (take your pick). This film is rather meant to make us bear witness to the fact that not even the perpetrators themselves are able to comprehend (let alone to judge) their own actions — not outside the realm of a fantasy they have created to remove themselves from their pasts in the same way in which they removed themselves from their present when they were doing what they did. It is always better to be regarded as heroes than as villains for things we only know we did and yet we fail to know why. They all have engaged in a self-indulgent enterprise of self-representation to better deal with a past they say is not bothering them anymore.

3-D glasses developers should probably develop a surrealistic pair of goggles to help us watch this history class; a history composed by a juxtaposition of several realities, of several fantasies, several phantasms, ghosts and discourses (both official and unofficial). Yet, unlike surrealism’s original idea (from Breton’s manifesto to Dalí’s mannish fest to Lorca’s feast of manning), the juxtapositions thrown in this film inside the film inside the film filmed by the perpetrators is not about self-exploration, but rather about self-aggrandizement. Everything they’re doing, everything indicates, is meant to aggrandize themselves. This is how Anwar wants to be seen by others, the way he’s been wanting to see himself since his youth, as a star, as a part of that silver nitrate constellation he so very candidly channeled in his executions.

I should probably say though that Anwar, to be fair, is the only one subject in The Act of Killing who dares to ask himself questions beyond his prefabricated answers, the only one who acknowledges his feeling haunted, cursed and who openly speaks about his nightmares — so much so that one of them makes it to the movie inside the movie inside . . . And thus he is the closest to catharsis. But not so. He is, we see it, desperate for redemption, yet he will not get there because he refuses to tell himself the truth of what he did. We watch him watching with pride the oneiric, onerous scene in which he’s thanked by one of his victims for sending him to heaven. Then he asks to watch the scene in which he’s being tortured and executed with the method he arguably developed. Here he starts to show some empathy, as he says he felt what his victims must have felt when they were tortured and killed — when he thus sent them to heaven. As he goes back to the rooftop wherein he killed hundreds of people, wherein he developed his method, wherein heaven was more at reach, he feels like throwing up. From heaven to heaving. He heaves heavily. Heavily heaves and vomits nothing. He tries to vomit as if he were trying to exorcise those demons that held sway inside him. But they are neither in nor out. They are him. It’s being him all the way. He goes out. He dreams his way out and he dreams he’s someone else, anybody. Elsewhere. 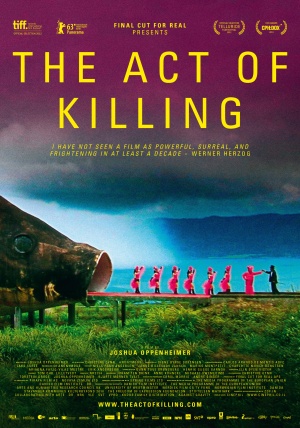