On the surface Ari Aster’s Midsommar, is very similar to “Hereditary,” in that it too deals with a grieving protagonist who unwittingly finds herself slipping into the clutches of a murderous cult, but it deviates quite sharply from Aster’s debut feature in two interesting ways: One, it’s clearly a very dark comedy at times, not just a few laughs sprinkled throughout, but a whole dumping of absurdist humor; and two, it’s not really a mystery tale with particularly shocking twists.

“Hereditary” hid its secrets well and I had no idea what was going to happen to Charlie or with Ann Dowd. But Midsommar is a different beast entirely. There’s never any doubt that these people in the idyllic Swedish village are dangerous cultists. There’s enough doubt for the characters to go along with it, because they trust the friend that brought them here and it’s clear that making an escape is going to be mighty awkward, but everyone watching this has to know they’re watching a horror movie and that it’s not going to be revealed that the creepy commune people are actually in this just to serve strangers some tea.

More than that, Aster makes no attempt to hide the truth. He lays clues out in the open for everyone to see. Before confirming what’s really going on, there are enough questions (and obvious answers) that we can piece a lot of things together ourselves. We see that commune members of a certain age go out into the world to find recruits for the ceremony, because they need fresh blood or the whole commune would be dead after a few ceremonies. We also learn that they use incest only for a specific reason and that otherwise they need outsiders for mates.

Even from the very start, before they even leave the States, the man responsible for the festivities, Pelle (Vilhelm Blomgren, “Gösta” TV series), tells graduate student Dani (Florence Pugh, “Fighting with My Family”) about the May Queen and immediately follows that up by saying that he’s more excited for her to come on the trip than he is for any of the others. You know, the only woman in the group that includes her boyfriend Christian (Jack Reynor, “Detroit”) and his friends, the academic Josh (William Jackson Harper, “Paterson”) and the dudebro douchey Mark (Will Poulter, “Maze Runner: The Death Cure”). He then pushes her emotional buttons right after that by dredging up the death of her parents and sister. I mean, come on! It’s the reddest red flag ever. Anyone who can trust Pelle at that point is being deliberately obtuse.

The notion of putting the monster in plain sight for a daylight horror movie is a really clever call. The risk is that the audience will just get fed up that the victims aren’t catching on and just walking away from the situation, but I think Aster does a great job of making escape always feel just a bit out of reach. From the isolated foreign setting to the way the characters shrug off the disappearances because the truth is too frightening (plus, they’re all high most of the time anyways!), I believed what was happening and didn’t find it far-fetched that they’d stick around even as things are very obviously going to hell from our perspective.

And that brings me to another good aspect of Midsommar — I very much like that Aster eventually unshackled the hallucinations from any specific character’s point of view, thus bringing viewers into the fold so that we feel we’re stuck there with everyone else. By the end, the stuff on the table is moving all over the place and we’re just witnessing the hallucinations ourselves without actually inhabiting Dani or Christian’s perspective. We’ve been drinking the mushroom-and-meat tea, too!

In doing so, Aster, again with Pawel Pogorzelski as his director of photography, proves he has a great visual eye. Early shots using reflections to put multiple characters in a frame or having Dani and Christian converse during an unbroken, unmoving shot while Christian is actually behind the camera but seen in a mirror or the edit with Dani bursting into the boys’ apartment bathroom and then suddenly being inside an airplane bathroom instead are all incredibly effective and consistently styled images. Every shot we’re privy to is impeccably established.

Also, of course, how can I get this far and not mention Florence Pugh? I’m in awe of how good she is already at such a young age. Between “Lady Macbeth” and Midsommar, she’s proven herself to be an incredibly versatile and powerful performer, one that can be so commanding in one role and so vulnerable in another. She’s absolutely brilliant here and I love how Aster is stacking up these great female performances at the center of his movies. The rest of the cast was great, too, especially Poulter, who was hilarious in all the right ways. “My uncle has Lyme disease and if you ask him, it was not worth the pleasant picnic in the park. He’s fucked!”

Poor Mark. Poor everyone, really. We’re all fucked when we find ourselves trapped in a world crafted by Ari Aster. 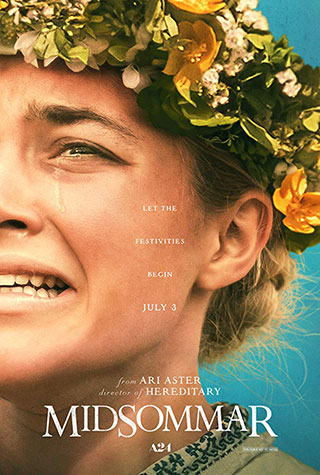