The third entry in the “Annabelle” series, a part of the extended “Conjuring” Universe, is Gary Dauberman’s directorial debut, Annabelle Comes Home. The scribe is close to the source, though, as he was responsible for scripts on 2014’s “Annabelle” and 2017’s “Annabelle: Creation,” as well as 2018’s “The Nun.” Luckily, Dauberman’s transition behind the camera is largely seamless — as he’s offered audiences perhaps the best installment in what has been an otherwise a mostly dull trilogy.

While the scribe-turned-helmer dives a bit deeper into the Warren lore (more specifically the couple’s evil artifacts room) and “conjures” up some ghastly spirits and memorable, demonic profiles, the “Annabelle” series (and much of the “Conjuring” Universe) still depends on jump scares and anemic scripts.

The source material is strong — in the Warrens’ chilling oeuvre — but it still get largely lost in translation. Despite strong performances from Vera Farmiga and Patrick Wilson in the anchor films, the potency feels quite diluted by the time it gets to the “Annabelle” spinoffs. Nonetheless, the “Conjuring” Universe remains a (profitable) Hollywood mainstay, and Dauberman’s scares still pack a hearty punch.

Taken at face value — and there are plenty of interesting profiles in the depths of the Warrens’ case files — Annabelle Comes Home is a worthy genre film, propped up by strong performances from the very-Warren-esque Mckenna Grace (“I, Tonya”) and Katie Sarife (“Twisted Sisters”) — one a young loner bullied about her parents’ work, the other a social but troubled teenager. Note, the titular doll still feels like a weak supporting character, outshined by the hellish, creative spirits under lock and key in the artifacts room.

Annabelle Comes Home is set after “The Conjuring” (you’ll notice a Warren Easter egg on the Rhode Island affair) and before “The Curse of La Llorana” and “The Conjuring 2.” This means viewers are dropped right into the middle of a peak investigatory era for the Warrens. When Ed and Lorraine are taken out of town for a case, Judy Warren (Grace) is left to the care of well-mannered babysitter, Mary Ellen (Madison Iseman, “Goosebumps 2: Haunted Halloween”).

What appears to be a uneventful night of TV and baking takes a turn for the worse when Mary Ellen’s outgoing friend, Daniela (Sarife), drops by to get an inside look at the Warrens’ suburban bi-level — supposedly a spiritual stronghold. While Judy wants no part in tempting fate, Daniela has a secret mission after suffering a tragic family loss. When she sneaks into the artifacts room and lets Annabelle squeeze through the unlocked chapel-glass case, the doll does not disappoint — summoning all spirits entombed in the room in an effort to harness a soul. It’s Judy, Mary Ellen and Daniela versus the underworld in the Warrens’ home — will they survive the night?

Dauberman’s efforts here certainly place this far above “Annabelle: Creation” and the first entry into the series — with well-rounded scares and a presence from the entire demonic spectrum. (One horned, satanic spirit will certainly spur goosebumps.) It’s a tall order for two teens and a ‘tween to outlast the clever mischief of this doll, but the helmer uses a number of techniques to make the most of it. This includes mostly admirable effects to bring his ghouls to life, plus strong camerawork that exemplifies contrast — in lighting, character, setting, etc.

For sure, the film’s third act depends on by-the-book jump scares and a calculable script, but Dauberman speeds up the action, cutting between three chilling scenes that all amount to Annabelle’s unquenchable taste for blood — or rather the souls of incident teenagers.

Any fan of the “Conjuring” universe, the brainchild of horror auteur James Wan, should give Annabelle Comes Home a watch, and perhaps they’ll be left anxious for the next installment. Dauberman’s script offers plenty of food for thought — as is the “Conjuring” way. (Remember, Annabelle was a brief cutaway scene in the first film; “The Nun” inspired by events of the second . . . and so on). 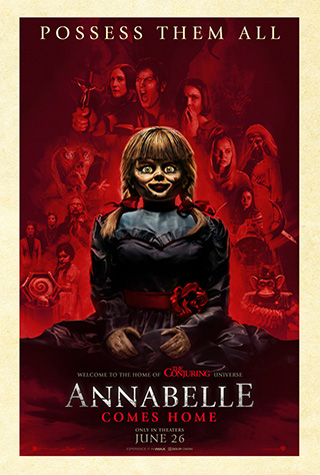