WARNING: This review is very geeky.

“Deep Space Nine” is the pariah, or even the “petaQ,” of the “Star Trek” franchise. It is regarded in fandom as a middle child between “The Next Generation” and “Voyager,” and is described by viewers and makers alike as the “darkest” entry of the franchise. More disparagingly, it has been described as a violation of the “Star Trek” ethos of exploration, and its long form serialized narrative did lose it significant numbers of viewers. In addition and in the great spirit of “Star Trek,” “Deep Space Nine” can be seen as a progressive show that challenged televisual norms and explored difficult social issues with the determination of a Ferengi that smells a profitable opportunity.

The negativity towards “DS9” can be surprising, as it was arguably the most sophisticated, complex and adventurous of the “Star Trek” series. The documentary What We Left Behind: Looking Back at Star Trek: Deep Space Nine addresses the legacy of the show, engaging with these various perspectives. The film is a remarkably honest and intimate look into the creative televisual process, as well as the place of television within wider dominions. Co-directed and presented by show runner Ira Steven Behr, it could easily have been a backslapping fest of latinum-lined self-congratulation.

Pleasingly, such self-hagiography is far from the case, as while Behr shows great affection for the series he ran for seven years, he is also highly self-deprecating and critical. His pride is evident as he talks about the risks that the show took, such as its long form narrative, a black central character, incorporation of earlier series characters and engagement with the topic of war, a topic that original “Star Trek” creator Gene Roddenberry steered clear of. Behr’s pride is also demonstrated in his Bajoranesque annoyance over the lack of recognition the show received. In a key scene, Behr discusses a critic’s review of 90s TV shows, which highlighted “Homicide: Life on the Street” as the only show to include a majority of black characters on screen. Behr vehemently points out that “DS9” frequently had only African-American characters on screen, but to his understandable ire, “DS9” was ignored, likely due to being science fiction. Behr and his editor Luke Snailham discuss the show’s progressive politics including race and homelessness, but his self-criticism is evident as he argues the show did not do enough for sexuality. “DS9” did feature a same-sex kiss in its fourth season, but did not develop its clearly camp character, Andrew Robinson’s Garak, the Cardassian tailor. Interestingly, Robinson and Behr do confirm the suggestion that Garak was gay, and this hindsight does make that aspect of the show a little frustrating.

Robinson’s contribution is just one of many from various people involved in “DS9” as, beyond Behr himself, the interviews cover a Promenade’s worth of talking heads including actors, writers, directors, effects supervisors and production designers. The interviews are candid and revealing, reflecting on the positives as well as the controversies of the show. Terry Farrell’s departure at the end of the sixth season is discussed, as well as the difficult issues that the show tackled, along with the view that such issues would not appear on television today. This frankness is a great strength of the film, allowing the viewer to consider many trials and tribble-ations. Behr and co-director David Zappone use a wide range of footage, including archive material from the original show, lovingly rendered into high definition, roundtable discussions, one on one interviews, Behr’s own narration and direct to camera address, as well as some amusing inserts from Andrew Robinson and Nana Visitor (who played Kyra Nerys). An especially poignant anecdote comes courtesy of Aron Eisenberg, who played juvenile Ferengi Nog. Eisenberg recounts messages that he received from war veterans who hugely appreciated his portrayal of a wounded soldier, and in relaying these sentiments, almost breaks down in tears. It is often easy to think of actors, especially those in television who work on the same show and play the same character for years, as simply going through the motions, but Eisenberg’s story, as well as several others, indicate the genuine investment that these people put into entertaining us, and the remarkable effects that they can have.

Further fan contributions include letters as hostile as a Jem’Hadar that were sent to Paramount during the series’ run, letters read out by the actors with a mixture of good humor and shock. Interviews with fans at conventions are also included, one of the most touching from a girl who was inspired to become a scientist by watching Terry Farrell as science officer Jadzia Dax. These contributions highlight that “Deep Space Nine” had the same impact as other “Star Trek” incarnations, while doing it in a different way. It is somewhat ironic that a franchise and mythos that continues to use as its mantra going where no one has gone before, received criticism for going where the show had not gone before. Still, fans are often impossible to predict.

The highlight of the documentary, however, is a writers’ room exercise in which Behr and his co-writers René Echevarria, Robert Hewitt Wolfe, Hans Beimler and Ronald D. Moore devise an eighth season of “DS9.” The scenes that depict this exercise work on multiple levels. They provide a fascinating probe into the creative TV process; we get a funny and engaging look at five men bantering in good humor with just the right level of creative fiction; for any fan of the show, it provides a wonderful “What if?” Such a fan would likely relish a glimpse into the Tear of a Prophet to see that episode and what might follow.

Much like the show it reminisces about, What We Left Behind: Looking Back at Star Trek: Deep Space Nine may not be for everyone. It is eccentric, unusual, sometimes aggravating and far from conclusive, and many might respond with an almighty “Oh, who cares!?” However, for the fan it offers much, and for those interested in the creative process as well as television history, it is candid and refreshing. More broadly, it is an insightful and intriguing documentation of an insightful and intriguing TV series, which with hindsight appears to have been defiantly ahead of its time. 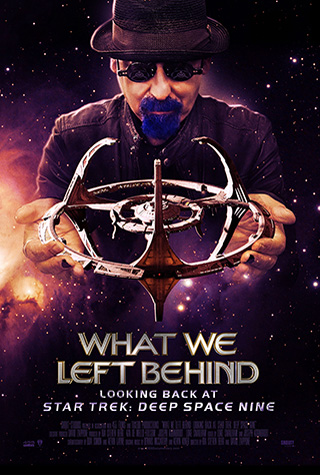 What We Left Behind: Looking Back at Star Trek: Deep Space Nine (2018)