Fighting With My Family is a film of weird elements: The city of Norwich, England; wrestling, with all its “fixed but not fake” performances, alternative names and larger than life personalities; a very human and indeed true story of both pursuing and losing out on a dream. Based on the story of Saraya Knight aka Paige (Florence Pugh, “Lady Macbeth”), a young woman from a Norwich wrestling family, Fighting With My Family charts Saraya’s journey from obscurity to her big break that led to her becoming a major star in the WWE.

On the one hand, Saraya’s tale is a classic fable of the underdog encountering adversity. On the other, it involves wrestling, a form of entertainment that carries certain stigmas. Writer-director Stephen Merchant overcomes these potential barriers by emphasizing affection for his characters and setting, ensuring that this is a film both for the wrestling fan and the general film viewer. The affection extends from the family to the very strange practice of professional wrestling, a physical athletic display that presents a transparent fiction which is, nonetheless, very real for its fans and participants.

Merchant’s affection for his material ensures that we never look on the Knight family with scorn or ridicule. Saraya, as well as her brother Zak (Jack Lowden, “Dunkirk”), have a lifelong dream to wrestle in the WWE, and the film takes time to flesh out this dream. Training sequences show the siblings running before the Norwich skyline, performing before sell-out crowds in pubs and, in some especially affecting scenes, training other young people. Zak is a role model for these kids: Whether they are dealing with disability, drugs or deprivation, he gives them all encouragement and tough love. In its scenes of disenfranchised urban people coming together through communal exercise, the film echoes “Rocky” as well as “The Full Monty,” expressing the importance of camaraderie. When Saraya is selected to join the WWE, this team of wrestling trainees form a magnificent fan club, bidding her farewell in a scene that is charming and emotional.

This emotion continues during Saraya’s time in Florida, where the film utilizes generic tropes of the outsider battling for acceptance, training montages and a convincing curmudgeon in the figure of Coach Hutch (Vince Vaughn, “Hacksaw Ridge”). These scenes provide a fascinating depiction of the actual mechanics of wrestling. The training includes straightforward physical conditioning, as well as the choreography and methods of physical communication between wrestlers. Coming from a wrestling family, Saryra brings greater knowledge than her contemporaries, and this, combined with her nationality and class, mark her out as an outsider. The scenes between Saraya and her fellow trainees, Maddison (Ellie Gonsalves), Kirsten (Aqueela Zoll, “Dances with Werewolves”) and Jeri-Lynn (Kim Matula, “Dawn Patrol”) may be familiar to anyone who has struggled to fit in. At times, Saraya stands true to her origins; at others she adopts the features of those different to her. At all times, her struggle is palatable and relatable, ensuring that we are with her as she turns over a massive tire, delivers a “receipt” or prepares for a “suicide dive.” In her scenes back home with her family, the devotion and love of her parents Ricky and Julia, played in great form by Nick Frost (“The Huntsman: Winter’s War”) and Lena Headey (“Pride and Prejudice and Zombies”), reaffirm the affection of the film as a whole.

Crucially, Fighting With My Family is far from being entirely rosy and sweet, as Merchant wisely explores both the success and failure of this dream. As Saraya develops her success, Zak’s failure to be picked for WWE causes him to sink deeper and deeper into depression. Zak’s failure constitutes a significant presentation of male mental health: From sitting in his car trying not to beg as he speaks to Hutch, to holding his pint glass dismally in a pub to his random bursts of violence, this is a portrait of a man falling apart. Anyone who has suffered disappointment and depression is likely to recognize this, and a man in his condition is a rare sight in film. The worry of his family is well-placed, and the tension in one sequence as they search for Zak is almost unbearable as everyone fears the worst. The film is to be applauded for the inclusion of this element that is both dramatically effective and socially conscientious.

Despite this serious strand, for the most part Fighting With My Family is a joyous experience. The physical sequences — including the training scenes and the wrestling matches — are viscerally exciting and much of the character interplay is very funny. Added star power comes from producer Dwayne Johnson (“Skyscraper”) who plays himself, and also plays himself playing The Rock, an interestingly layered performance. Much as a wrestler’s persona must be sold to a crowd, so does Florence Pugh sell the story of Saraya/Paige to the film’s audience. Building on the promise of her earlier work, Pugh excels on the levels of emotion, physicality, performance, and charisma, capturing the viewer’s attention in a headlock and bodyslamming her way into our hearts.

Perhaps the film’s greatest strength is its unashamed romanticism of Saryra’s dream, a high flying one for sure, but one that also keeps its feet on the mat. The story of Paige is a true one that could easily have gone a different way. Therefore, just as anyone who has suffered from disappointment and depression can identify with Zak, so can anyone who has believed in a dream identify with its heroine. Saraya’s courage, determination, heartache and journey through setback, isolation, acceptance and triumph is enough to make the viewer applaud, weep and punch the air. Regardless of your views on wrestling, come the finale of Fighting With My Family, you may find yourself chanting Paige’s name. 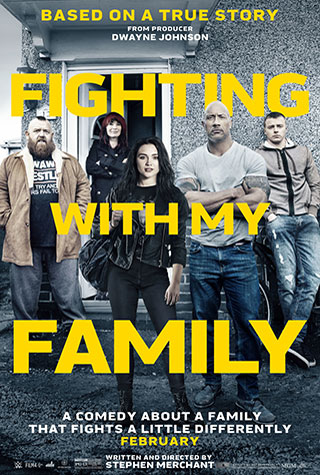