An astronomer, obsessed with finding a planet capable of supporting life, hires a dreamy, itinerant artist with no background in science to be his research assistant in the majestic, gorgeous Clara. This is a movie that should appeal to romantics and science wonks alike, and it features strong performances by the two leads, who happen to be married in real life.

Dr. Isaac Bruno (Patrick J. Adams, “Car Dogs”) is a somewhat-distracted college professor, distracted to the point that he has “debates” with his class about whether love is statistically more probable than an Earth-like exoplanet. This unorthodox classroom behavior — along with surreptitiously shifting the angle of the department’s Earth-bound telescope — gets him kicked out of the college. For Isaac, this totally blows, because he shifted the ‘scope so he could grab more data about possibly inhabited (or inhabitable) exoplanets, and he wants to have a candidate planet in mind when two new orbital telescopes are launched in about a year’s time.

But now, without an office or access to the telescope, Isaac decides to work on this project from home, analyzing data like it’s going out of style. So, so much data. He needs an assistant, so he puts up notices in the college that no longer employs him, looking for anyone who’s willing to work for room and board but no pay. Amazingly, he gets no responses and commiserates with his teacher pal Charlie (Ennis Esmer, “The Rocker”), who points out to Isaac that he (Isaac) still hasn’t gotten over his wife, also an astronomer, leaving him and going to work for CalTech. Some time later, Isaac returns to his tiny apartment and finds an artist named Clara (Troian Bellisario, “Martyrs”) sitting outside his front door with her collie, Eva, looking to apply for the job. She’s the only applicant, so of course she gets it.

They’re to be research partners, Isaac insists. Not friends, not roommates, but as soon as he tells Clara this, you know darn well something more will develop between them. Their relationship serves as a fine backdrop to the serious data analysis they’re performing; a welcome backdrop, to be sure, for those of us who are not well versed in astronomy. To address we neophytes indirectly, Isaac explains what Clara (and he) will be looking for: A “dip” in the data’s graphs that indicates that an object is transiting — passing in front of — a faraway star. They’re looking at the data from thousands of stars, and if they find that so-called dip, then that star will be considered a possible inhabitable planet.

The movie is at times straightforward and philosophical. The conflicts between Isaac and his pursuit of knowledge, Isaac and Clara, Isaac and Charlie, Isaac and his ex wife (you get the idea), they each offset the eternal questions, posed in the movie, of life after death, the meaning of life as we know it, the connection of human life to extraterrestrial entities, and so on. We are stardust, we are golden, says the movie. We are all rungs in the same ladder, leaves from the same tree. Or words to that effect.

In the second half of Clara, particularly the final 20 minutes or so, the film takes an even more existential approach, somewhat along the lines of “2001: A Space Odyssey.” All of those previous questions of who we are and where we’re headed come to a, well, a head. Everything seems to tie together quite neatly (in the movie, that is, not in real life). Maybe a little too neatly, like “2010: The Year We Make Contact.” Isaac’s journey from overworked jerk to mind-opened scientist is a wonder to behold, thanks to Adams’ performance. This is not to give short shrift to the work of Bellisario, who’s divine and sublime as Clara, who knows nothing and everything simultaneously.

There’s a strong, unambiguous beauty to the space without and the space between people in Clara. Those who are well versed in the ways of science will find this depicted search for life on other planets to be gratifying and fascinating, and the rest of us will be enthralled by the film’s beautiful, sometimes dazzling imagery. Note: The ending may be a bit too abrupt (and abstract) for one’s tastes, but still — it’s the journey, not the destination, and in that vein I believe that director Akash Sherman succeeded. 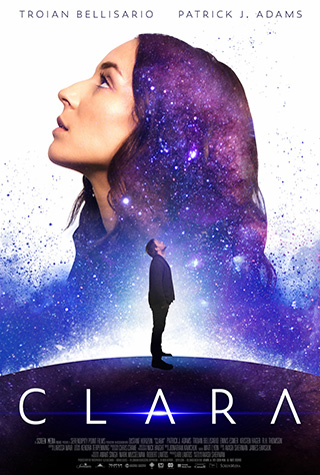