It is a cliché to say that less is more. In the case of Ant-Man and the Wasp, Marvel excels in delivering the delights of smaller scales, both in the physical and emotional sense. After the weighty politics of “Black Panther” and the epic scale of “Avengers: Infinity War,” the latest entry in the Marvel Cinematic Universe (MCU) demonstrates that good things (also) come in small packages, with a comedic caper that delivers on the action as well as the laughs, and tugs the heartstrings with a touching central thread.

Like the first “Ant-Man,” the plot of Ant-Man and the Wasp is largely personal, with a focus on family. After the events of “Captain America: Civil War,” Scott Lang (Paul Rudd, “The Catcher Was a Spy”) has been placed under house arrest, forbidden from superheroics and barred from any contact with individuals governed by the Sokovia Accords (i.e., superheroes). This includes Hope Van Dyne (Evangeline Lilly, “The Hobbit: The Battle of the Five Armies”) and Hank Pym (Michael Douglas, “Last Vegas”), who are on the run and searching for Hope’s mother Janet (Michelle Pfeiffer, “Murder on the Orient Express”), lost in the quantum realm for thirty years. Initially, Scott’s sole interest is to fulfill the terms of his sentence and maintain a relationship with his daughter Cassie (Abby Ryder Fortson, “Ant-Man”), under the watchful eye of the officious and fairly absurd FBI agent Jimmy Woo (Randall Park, “Snatched”). However, when it appears he may be able to help with the search for Janet, Scott quickly finds himself drawn into Hope and Hank’s world of varying sizes. Cue many high (and low) jinks involving a Hotwheels car collection and a missing building, as well as shady black-market dealer (is there any other kind?) Sonny Burch (Walton Goggins, “Maze Runner: The Death Cure”), truth serum (or is it?), and the mysterious Ghost/Ava (Hannah John-Kamen, “Tomb Raider”). Sure enough, the Pym Particle suits are quickly broken out, along with a few upgrades.

Breaking out the familiar with upgrades is a fair description of the film itself, as Ant-Man and the Wasp continues tropes from “Ant-Man.” These include extensive use of different scales, planning of elaborate schemes and a strong line in comedy. A comic highlight is Luis (Michael Peña, “The Martian”) narrating flashbacks complete with lip-synced dialogue, while ants both regular and extra-sized play important roles. Where the film differs from its predecessor is a greater sense of confidence. Director Peyton Reed handles the varying scales with efficiency and aplomb, building on the promise of his previous foray. Director of photography Dante Spinotti lenses the scenes in rich depth and ensures that the variations in size seem as natural as the movement of both human and digital figures. The film also defies the convention of too many writers being a problem, as Chris McKenna, Erik Sommers, Andrew Barrer, Gabriel Ferrari and star Rudd marshal their talents like some sort of hive mind (OK, that’s bees, but work with me). Rudd also delivers a brilliant balancing act between hang dog put-uponness and action heroics. In one memorable scene, he effectively embodies another character complete with different intonation and body language, in a manner that is both affecting and amusing.

Even when alone, Rudd brings the laughs: Scott’s solo scenes at home are hilarious — Reed and editors Dan Lebental and Craig Wood compile a montage of Scott bouncing a ball around the walls (in a manner reminiscent of Steve McQueen in “The Great Escape”), playing the drums and taking a bath with a plastic bag around his ankle bracelet tag. Furthermore, Scott’s interaction with Cassie is touching and genuine: Any parent watching may well envy the imaginative use of cardboard and big kids (like this one!) are likely to recall the joy of building dens. The appearances of Maggie (Judy Greer, “Our Souls at Night”) and Paxton (Bobby Cannavale, “Danny Collins”) are brief, which makes sense as that tension is resolved. While Scott clashes with Hope and Hank, reconciliation seems likely as mutual understanding and affection becomes clear through their banter.

With Scott’s family problems largely solved, the film’s principal antagonist is Ghost, who has her own reasons for pursuing the quantum research. Her presence is a striking introduction of a new character, wracked with physical and emotional pain as well as proving a dangerous adversary. In a rare false note, her backstory is presented with a rather hamfisted flashback, and her English accent is never explained which is a little jarring. Furthermore, she is anachronistically po-faced in a generally light-hearted film, although her visual rendering is arresting. Ghost’s phasing is typical of the imaginative visual style of Ant-Man and the Wasp, as her appearances and disappearances require close attention and ensure the viewer’s attention shifts along with her form. Similarly, the different scales are used to even greater effect than the previous film, as characters and objects go from normal to tiny and also to giant — look out for the kitchen fight especially.

One of the film’s great pleasures is that the viewer experiences these perspectives as well. This is most apparent during a bravura car chase through the streets of San Francisco that manages to reference similar sequences in “The Rock” and (in another McQueen echo), “Bullitt,” while also being fresh and imaginative in its own right. As part of this imagination, the film’s presentation of the quantum realm is as alien as the planets of “Guardians of the Galaxy” and as trippy as “Doctor Strange.” The film’s careful attention to character dynamics, from the central threesome to Scott’s work partners and Sonny’s helpers, ensure that we care about the characters as we join them for this ride. The stakes of Ant-Man and the Wasp are overtly personal and low key rather than galactic and Loki, and this makes it a breath of fresh air before things get intense again in the MCU. As always, it is important to stay until the end of the credits to get a hint of what is coming next. 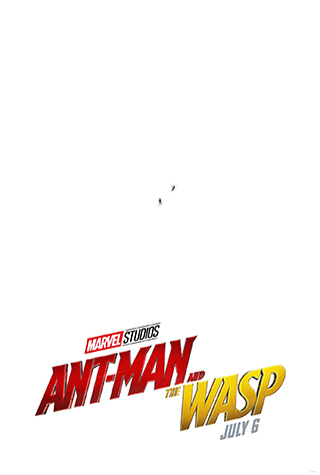