Recapturing old memories can be challenging, especially when the line between what really happened and what may have happened is so fragile. Like Joanna Hogg’s recent film memoir, “The Souvenir,” Chilean director Dominga Sotomayor Castillo (“Thursday Till Sunday”), in her third feature Too Late to Die Young (Tarde para morir joven), is uncertain where memory ends and imagination begins. Winner of the award for Best Director at the Locarno Film Festival (the first woman director to win that prize), the moody, elusive coming-of-age drama follows a group of families living in a secluded, non-traditional community at the foot of the Andes Mountains, close to the city of Santiago.

Produced by Rodrigo Teixeira, one of the producers of “Call Me by Your Name,” and set in the summer of 1990, the unspoken context of the film is the recent transition of Chile from its unending nightmare of political violence and social unrest under the dictator Pinochet to a burgeoning democracy, open to new possibilities. As exquisitely photographed by Inti Briones (“The Play”), the film is based on Sotomayor’s experience of her own childhood. According to the director, the film is “a collective portrait of a society coming to terms, often messily, with the new opportunities around them. The location is the main character. I grew up in a community that is similar. When democracy arrived to Chile in 1989, my parents decided to move to a commune that was still being constructed.”

Reminiscent of Lucretia Martel’s “La Ciénaga,” the film unfolds in a seemingly uneventful series of episodes, but is steeped in atmosphere and much is going on beneath the surface. Though the film’s lack of a stated context often makes us feel as if we are eavesdropping on an intimate gathering like an uninvited guest at a party, the screen pulsates with life, music and joy. Sharing life in the commune, children run and play in their natural surroundings, swim in a makeshift pool, while the adults engage in the day-to-day activities of cooking, listening to music, and planning a party to celebrate the New Year.

The biggest source of contention is whether or not to install a fuel generator and where to obtain a local water source. For the children, life, as Sotomayor expresses it, is “without limits, without borders . . . listening to people talk, trying to understand things that were definitely not intended for them.” The children in the film are all non-professional actors recruited from local communes, but the focus is on sixteen-year-olds Sofía (Demian Hernández) and Lucas (Antar Machado) and the growing awareness of their sexuality (sadly Machado lost his father two days before the shooting began but insisted on continuing). The striking-looking Sofía must contend both with Lucas’ attraction to her and with Ignacio (Matías Oviedo, “I’m Not Lorena”), an older man visiting the commune with whom she has her first sexual experience and her first heartbreak.

The camera follows Sofía as she smokes a cigarette in the bathtub, bathes in a spring beneath a cascading waterfall, reflects silently on her confusing feelings, and converses with her impenetrable father about her desire to move back to the city to live with her mother. The longing look on her face suggests that, like the author Henri Barbusse, she sees “too deep and too much.” Ten-year-old Clara (Magdalena Tótoro), another important character, is an unusually expressive child who reveals her deepest feelings non-verbally. She is distraught when her dog Frida runs away, but when she discovers that Frida has been living with a poor family in the city, her joy turns to dismay when the dog no longer responds to the name “Frida” but only to “Cindy,” the name her new family bestowed on her.

Too Late to Die Young is a sensitive and haunting film in which the characters are so real and indelibly drawn that, as with many great films, the end brought to me an abiding sense of loss. The tension of the film builds when a break-in occurs and a water-pipe is deliberately blocked and culminates in a fast-spreading forest fire. As Sotomayor put it, “It is the explosion of what has been contained in these early scenes. It also represents the end of an illusion.” Unlike the holier-than-thou alienation in the film, “Captain Fantastic,” Too Late to Die Young implies that there is no escape from the struggles and challenges of life whether you live in a crowded city or in the middle of a forest. As Bob Dylan said it, “It’s life and life only.” 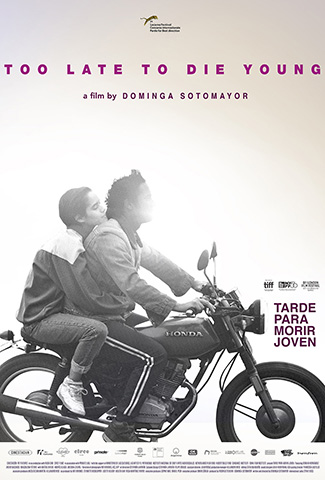