Video game movies have sucked for decades, so when a kind of good one comes along, it arrives with the benefit of basement-dwelling expectations. This could be the explanation for why Roar Uthaug’s lean, lithe reboot Tomb Raider is so clearly silly and yet strangely satisfying at the same time. Or perhaps the movie works as well as it does because it treats the video game industry’s most iconic heroine with an almost overwhelming amount of respect.

This isn’t a woman to be drooled over or gawked at the way Lara Croft was originally devised; this is a woman to be in awe of and even to fear since she’s probably faster, tougher, and more resourceful than just about any of us in the audience. Even though the movie is an origin story, meaning the protagonist isn’t a seasoned pro the way she was when originally introduced on the big screen in Simon West’s 2001 movie, this Lara (Alicia Vikander, “The Light Between Oceans”) is still prepped for adventure right from the start.

In a series of fast-paced sequences, Uthaug depicts a young Lara that actively seeks a challenge, be it a sparring session where she’s outmatched or an impromptu cycling race that sends her hurtling through the bustling streets of London. Lara does everything with a large chip on her shoulder and, as a few corny flashbacks make clear, that chip looks a whole lot like Dominic West (“The Square”), who plays Lara’s long-lost father, Lord Richard Croft.

Lara is sitting on a goldmine of an inheritance, but she stubbornly refuses to sign the papers that will provide her access to the family fortune because it would require her to admit that her dad is dead. Or is he? That’s the hook that lends Lara hope in the form of a puzzle that reveals to her the exciting exploits her archaeological father previously kept well hidden. With map in hand, the plucky heroine embarks on a journey to find a mysterious island that dear old dad was looking for when he disappeared years earlier.

Luckily for Uthaug, trouble finds Lara rather easily and often, so even before the island is in sight, there are plenty of opportunities for stunt-filled set pieces. A foot chase through a series of fishing boats in a Hong Kong harbor is an especially fun diversion that, like all of the set pieces, states the movie’s main point both bluntly and convincingly: Lara is awesome.

That’s basically the movie’s entire gleeful purpose, to illustrate Lara’s awesomeness and then repeatedly remind us about it, which allows the movie to operate on such honestly simple terms that it becomes somewhat endearing and surprisingly entertaining. Tomb Raider owes much of its success in this department to Vikander, who carves her performance out of the space between effort and effortless.

Her physique confirms all the work she put in at the gym, while her gutsy attitude exhibits itself naturally. It’s a convincing pairing that allows this Lara to balance her super heroics with a more believable intensity, positioning herself in the middle of a cinematic spectrum that ranges from gritty to epically exaggerated. It would be a significant stretch to call Lara’s fantastic feats realistic, but Vikander still grounds the heroine’s actions and personality so that she nimbly avoids cartoonish characterization.

The same can’t be said (at least not with a straight face) of seething, sweaty villain Mathias Vogel (Walton Goggins, “The Hateful Eight”), a rival of Lara’s father who has long been trapped on the island that our protagonist has been led to. Vogel has been obsessively searching for a tomb that he desperately wants to raid, but he’s terrible at achieving this goal and so he’s been sitting in the jungle for several years, growing angrier with each passing day and having only some hulking henchmen and beleaguered slave workers to keep him company.

Enter Lara, who is decidedly better equipped for the act of tomb raiding. Again, this is the movie’s whole point, that Lara is better than a bunch of nasty, stupid men. It’s all presented in such silly fashion that it’s hardly asking to be held up as some grand feminist creed, but as far as Hollywood depictions of heroines go, this one earns bonus points for being so eager to celebrate a woman without sexualizing her or adorning her with a love interest accessory.

She has a male sidekick in super-serious sailor Lu Ren (Daniel Wu, “Warcraft”), but he’s never once used in any sort of romantic capacity and, once the pair end up on the island, they quickly get to having their own separate adventures, with Lara’s being the more thrilling, of course.

Considering that Lara Croft’s entire existence was originally predicated on male gamers’ desire for a sexy female Indiana Jones to play with, it’s hugely encouraging to see that this new movie adaptation is so willing to ditch the sexual element in favor of just letting her be tough and fiercely independent. To be fair, Tomb Raider falls more along the lines of the rebooted game series, although Hollywood taking the high road here has to be something of a surprise regardless.

At the same time, heaping so much praise on such a cheeseball effort feels like it’s bordering on foolhardiness, since this is absolutely a derivative adventure flick with a relatively flat visual scheme and a coffin full of clichés. Some viewers will fairly miss the more openly ridiculous gags of the Angelina Jolie-starring pair of “Tomb Raider” movies and it’s tough to deny that punching a CGI shark in the nose is a more memorable image than most of what Uthaug cooks up here.

So the best way to approach this new Tomb Raider is to criticize its shortcomings while appreciating that this is a new breed of screen heroine that gets the job done without the aid of some sexy cinematic poses. She’s just plain awesome on her own and she knows it, so it’s best to get out of her way and enjoy the fact that this familiar sort of adventure that borrows so much from past movies actually manages to feel refreshingly modern. 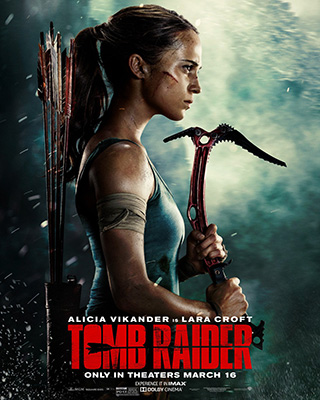