A part of the town of Edgartown, Massachusetts is a small island on the eastern end of Martha’s Vineyard known as Chappaquiddick. It’s famous because on July 18, 1969, a 1967 Oldsmobile carrying U.S. Senator Edward M. Kennedy (Jason Clarke, “Mudbound”), then 36, and Kennedy staffer Mary Jo Kopechne (Kate Mara, “Megan Leavey”), 28, plunged off the Dike Bridge killing the young woman. Though Kennedy escaped, the tragedy forever ended his presidential ambitions. The accident and its surrounding events are dramatized in John Curran’s Chappaquiddick, the first filmed version of the event. It is a strangely lifeless film, however, which halfheartedly struggles to present Kennedy in a sympathetic light, but ends up portraying a character that is weak and opportunistic.

Written by Taylor Allen and Andrew Logan whose script relies on the historical record including the inquest into the accident, Australian actor Clarke plays Kennedy in a rather wooden manner, providing little hint of the Kennedy charm. To many, Ted Kennedy represented the hope that the idealism of his fallen brothers Jack and Bobby would be rekindled. The dream died in stages beginning with the assassination of President John F. Kennedy in Dallas in 1963 followed by that of his brother Bobby five years later. Unanswered questions surround all of these events, however, and what happened at Chappaquiddick is no clearer after watching the film.

Some of the basic facts about the incident are these (some are still in dispute): The Senator, in Edgartown for the annual regatta he had missed the previous year because of Bobby’s death, had just left a party for his brother Robert’s former campaign staffers at a small cottage in Chappaquiddick to drive one of the so-called “boiler room girls,” Mary Jo Kopechne, to catch the last ferry back to Edgartown. Though the Senator later claimed that she felt sick and asked to be driven to the ferry, the fact that she left her purse and her keys at the party may suggest that she intended to return. Drinking took place at the party, but whether the Senator was involved is uncertain.

Though Kennedy said that he left the party at 11:15 p.m., a deputy sheriff reported seeing a car that matched Kennedy’s with a man and a woman inside near the turn-off for the beach at 12:45 a.m. — an hour and a half after Kennedy said the accident had occurred. Ignoring signs pointing to the ferry, the car turned right onto a dirt road and went off the Dike Bridge (which had no guardrails) and plunged into the water killing Mary Jo, though the exact time and cause of her death is unknown since no autopsy was ever performed.

Though urged by his cousin Joe Gargan (Ed Helms, “Vacation”) and former U.S. Attorney for Massachusetts Paul Markham (Jim Gaffigan, “The Living Wake”) to go to the police, Kennedy did not report the accident for ten hours after it occurred, though he had several opportunities to call along the way back to the cottage. Kennedy later claimed that he dove repeatedly “into the strong and murky current” to try and find Kopechne but to no avail. In his nationwide televised address, Kennedy suggested that a concussion played a role in warping his judgment. “I was overcome,” he said, “I’m frank to say, by a jumble of emotions: Grief, fear, doubt, exhaustion, panic, confusion and shock.”

No doubt at his overbearing father’s (Bruce Dern, “Nebraska”) urging, Kennedy’s inner circle of confidants met to offer some damage control, knowing that the Senator’s political future was on the line. These associates included former U.S. Defense Secretary Robert McNamara (Clancy Brown, “Hail, Caesar!”), Kennedy speechwriter Ted Sorensen (Taylor Nichols, “Freeloaders”), and brother-in-law Steve Smith (Victor Warren, “My Daddy’s in Heaven”). Determined to overcome his misfortune, Kennedy agreed to tell the truth (at least his version of the truth, as he so charmingly puts it) and ask the people of Massachusetts to weigh in on whether or not he should resign. The support he received from his constituents was overwhelming and he was easily reelected the following year.

Though charges of involuntary manslaughter were possible, Kennedy was convicted only of leaving the scene of an accident, but the lasting political consequences far exceeded the legal. Despite what the film may suggest, many questions remain. We still have no idea of the exact nature of the relationship between the Senator and Mary Jo, whether or not Kennedy had been drinking when he got in the car, how he escaped from the sinking car, whether Mary Jo died of drowning or of suffocation, why she was found in the back seat of the car, why Kennedy waited ten hours before reporting the incident, and why his stories were so full of contradictions.

Since there were no witnesses to the accident, the only person who knows the full truth was Kennedy and he died in 2009. We can still surmise, guess, and speculate which is basically what Curran and his writers do. Ultimately, Chappaquiddick is ambiguous, illuminating neither the truth behind the events on that summer night, nor the contradictions in Kennedy’s character. What is clear, however, is that neither Kennedy, his political associates, his attorney, nor the Edgartown police emerged with their reputations unscathed, and even Kennedy’s lifetime of service in the fight for a more just society would ever change that.

'Movie Review: Chappaquiddick (2017)' has no comments 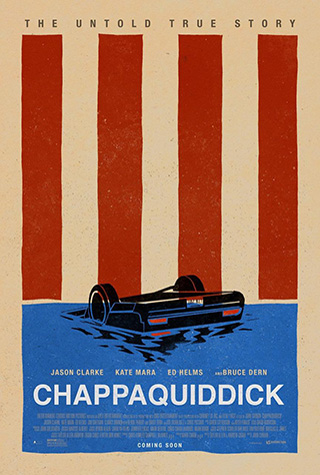