According to Swedish director Ruben Östlund (“Force Majeure”), society today has turned its back on the social contract, the obligation that people not only express their concerns for other’s well-being but act upon them in concrete and meaningful ways. Winner of the Palme d’Or at the 2017 Cannes Film Festival, Östlund’s latest film, The Square, mercilessly skewers the moral hypocrisy of the contemporary art museum world in Stockholm, particularly taking aim at Christian (Claes Bang, “Jungle Child”), the museum’s chief curator whose pretensions are repeatedly called to task in creative and sometimes bizarre ways during the two hour and twenty minute film.

Christian’s current project is to develop marketing for an exhibition that features a piece of artwork called “The Square,” a 13 x 13 foot illuminated space that seeks to create the possibility for people to bridge the gap between the ideals they hold and the way they actually behave. It is adorned by a plaque that reads, “The Square is a sanctuary of trust and caring. Within it we all share equal rights and obligations.” What this basically translates to is that anyone standing inside the square is afforded whatever help that they ask for from passersby, whether it involves money or just physical or emotional help.

Christian is “likable enough,” but, if the definition of hypocrisy is “the practice of claiming to have moral standards or beliefs to which ones own behavior does not conform,” he is a walking example. The Square begins with the curator being interviewed by personable journalist Anne (Elisabeth Moss, “High-Rise”) about his upcoming art project. It all goes well until Christian is asked to explain the meaning of the convoluted phrase, “the topos of exhibition/non-exhibition.” His inability to do so in a coherent manner unmasks his artier-than-thou façade and the interview begins to go off the rails.

Later on the street, Christian’s insecurity is reinforced when, after intervening to help a woman screaming that a man is trying to kill her, he is played for a sucker by con artists who rob him of his wallet, cell phone, and cufflinks. Using GPS to track his cell phone to an apartment building in a seedy part of town, he is persuaded by his assistant, Michael (Christopher Læssø, “Follow the Money” TV series), to print threatening letters and drop them into each person’s mailbox with the address of a place to return the stolen goods. While this tactic eventually leads to the return of his materials, not having foreseen any consequences that might affect someone else, he is forced to deal with a super irate young man (Elijandro Edouard) who is persistent in demanding an apology from Christian who stonewalls the boy until he no longer can.

All of this sounds dark, but Östlund’s comic genius lifts the film to a truly innovative level with an abundance (perhaps an overabundance) of impressive set pieces. There is the homeless woman who brazenly asks Christian to buy her a Chicken Ciabatta sandwich without onions. The curator, who only wants to help, reacts testily by buying her the sandwich, but tells her to pick out the onions herself. In another sequence, a member of the audience with Tourette’s syndrome keeps interrupting a museum Q&A presentation by the artist Julian (Dominic West, “Money Monster”), calling out obscene remarks directed towards the female host.

There is more. A fellow worker insists on bringing a crying baby to every meeting; a tug of war erupts over what to do with a used condom after Christian and Anne have sex together in her room (much to the chagrin of Anne’s Chimpanzee roommate); an ill-advised ad campaign promoting the new project showing a young girl being blown to bits inside the square goes viral which forces some changes in the museum’s personnel; museum donors rush toward a complementary buffet before the chef even finishes describing what’s being offered. The centerpiece of the film, however, involves Oleg (Terry Notary, “Warcraft: The Beginning”), a performance artist who does more than his share of frightening the attendees at a ball thrown for the museum’s well-heeled donors.

Oleg acts the part of an aggressive ape, grunting and screeching while mercilessly hunting its prey. The donors sit transfixed, protecting themselves while ignoring Oleg who jumps on tables, pulls people’s hair, and eventually assaults a woman until several men pounce on the aggressor, unleashing their most repressed form of violence. It is a scene that ranges from curious to funny to threatening to violent to just plain sad. While Östlund should be acknowledged for attempting to tackle an issue that has relevance for our times, the film’s message that an inordinate attachment to individualism and, what the director calls “The Bystander Effect,” threatens our ability to connect with others, is a comfortable illusion, a symbol of our malaise, not the cause.

What is more significant is the prevailing assumption of our culture that we are separate, disconnected human beings living in a random, indifferent, and deterministic universe. As Christian philosopher and priest Thomas Berry puts it, “The world about us has become an ‘it’ rather than a ‘thou.’” In The Square, the repetitive inclusion of Bach/Gounod’s beautiful Ave Maria suggests, however, that Östlund appreciates the fact that we may not be able to understand the needs and wants of others until we can awaken from the dream of a separate self to the truth of who we really are. 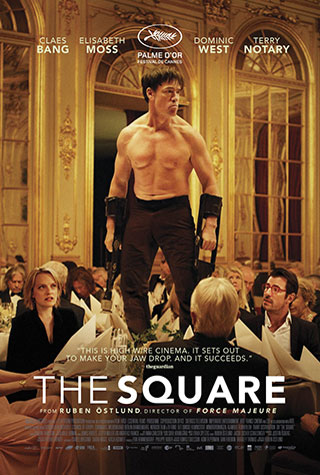