A clumsy cross between Paddy Chayefsky’s critically acclaimed television news spectacle in 1976’s “Network” and cable television’s “Mad Money” host Jim Cramer, Money Monster tries to mesh together the cynicism of high stakes TV exploitation with the existing and continuing concerns of the fragile national economy. However, the film does more strutting around with its polished players on screen than adequately tackling what it sets out to do by shining a spotlight on its socially conscious skepticism with showy, sluggish suspense. Foster’s concocted commentary on the wicked Wall Street-esque shenanigans via televised expose is barely above the by-the-numbers TV hostage carnival of the forgettable 1997 John Travolta-Dustin Hoffman generic edge-of-your-seat melodrama “Mad City” sporting a similar theme with live broadcast dissatisfaction.

Foster, along with screenwriters Jamie Linden, Jim Kouf and Alan DiFiore, provide a crisp-looking, glossy package as Money Monster does embrace the so-called nerve-racking excitement of what could be an explosive situation on the small screen with a gun-toting madman demanding attention on the airwaves. Still, in today’s warped world of media stunts and attention-getting gimmickry where we are now immune to sensationalized reality television (not to mention real-life news-breaking tragedies both domestic and international), Money Monster simply feels pat and pretentious. Consequently, Foster’s confrontational narrative never consistently builds up the anxious moments enough for the audience to deem this unsettling predicament of an unstable man’s disdain as solidly fixating.

Clooney plays a handsome, TV investment know-it-all named Lee Gates whose bombastic antics on the boob tube has made him a successful fiscally-minded wiz to the viewers that religiously follow his advice. Unapologetic for his pomposity and popularity, Gates has a reliable safety net behind the scenes in the form of his program director/producer Patty Fenn (Roberts). Patty resourcefully serves as Gates’s “protector” as she is responsible for the highly watched entertainment that Gates’s unflappable persona helps put “Money Monster” in the ratings winner’s circle. Regardless of how the insufferable Lee Gates is perceived, he is certainly money in the bank for the avid followers that hang on his every wallet-friendly word.

When Gates decides to champion a sure bet high tech stock that ends up folding like a cheap army cot the outrage is felt by one particular disgruntled investor in Kyle Budwell (Jack O’Connell, “Unbroken”). Budwell wants to exact revenge on Gates and his handlers for ruining his financial security. Hence, the show is paid an ominous visit by the irate Budwell as he wields a gun and orders the blustery host Gates to wear an explosive jacket. Finally, the animated bark and bite of Lee Gates is silenced making the hotshot host feel as incomplete as an unsigned money order. But with Gates, Patty and the rest of the “Money Monster” crew held at gunpoint something has to be done to contain the scary tactics of the highly disturbed Kyle Budwell.

The shock value behind Money Monster never really registers because the hedonistic happenings are dramatically dour and feel relentlessly staged. Somehow the star wattage of buddies Clooney and Roberts are not convincing enough for us to buy into the perilous intentions of O’Connell’s trigger-finger tyrant. The rooting interest between Clooney’s Gates and O’Connell’s Budwell is a mixed bag and perhaps this is a good thing since both men are unsavory in their separate actions and need to be accountable for whatever they must reconcile. Both Clooney and Roberts want to come off as compelling components given their high-powered presence, but the truth is that any lesser known acting pair could have done their synthetic roles as effectively (but wouldn’t be able to put bodies into seats as the former “Ocean’s Eleven” co-stars obviously can). O’Connell is serviceable as the scorned misfit looking for retaliation against those who he believes cheated him.

Foster does have a knack for creating the high wire atmosphere of live television and the shifty editing techniques are quite crafty as the boiling point reaches its simmering climax. Nevertheless, Money Monster fails to lasso whatever discontentment — satirical or otherwise — that one could relate to with identifying vigor. Financial fables such as the recent “The Big Short” or filmmaker Michael Moore’s documentary “Capitalism: A Love Story” have proven edginess, darkened wit and a unique brand of suspense with caustic money matters that is more believable and bankable than the disconnected investment of this cash cow caper.

Money Monster has no real fresh ideas in the realm of television sensationalism or finance stagnation and it certainly flirts around with a bankrupt aftertaste despite Clooney’s impishness and charisma in addition to Roberts’s infectious charm and radiance. 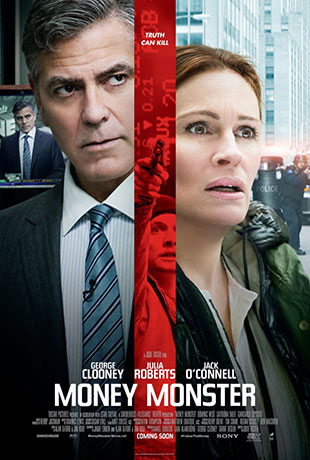