There are several factoids I learned after watching The Wicker Tree, the 39 years in the making sequel to cult favorite “The Wicker Man.” For one, nuclear power plants make all men who drink or bathe in its cooling source sterile (although on the flip side it also grants them the gift of being able to perform sexually upwards of seven times in short time frame). Another (and the more damning) is born again Christian missionaries are some stupid sons-a-bitches — even when they know, with overwhelming certainty, that something is amiss, they keep walking the walk and talking the talk. Simple country Scottish folk ain’t much better mind you, at least not the ones Beth (Brittania Nicol) and her fiancé Steve (Henry Garrett) are trying to convert.

Based off of the Robin Hardy novel, “Cowboys for Christ,” the multi-dimensional The Wicker Tree follows these promise ring wearing “saviors” into the hornets’ nest of Pagans and other nefarious individuals who would use faith to strengthen their own position. And for the record, multi-dimensional is meant as a slight — the movie, while having a deep core that prods at the great lengths individuals go to maintain their belief systems, is painfully slow, employs suspect direction and enjoys the services of some unbelievably bad actors who speak lines of unspeakably bad dialogue. It’s all so poor, in fact, I couldn’t be sure whether Robin Hardy (who is responsible for everything in this movie) purposely made the movie so campy on purpose.

Let’s assume he did, so at least I can imagine I enjoyed what would have been otherwise a wasted 90 minutes of my time.

Either way, it finds Beth and Steve in the beautiful countryside of Tressock, Scotland trying to spread the word of the Good Book. They have little luck, which comes off as no surprise, as the two good doers are seen as sacrificial lambs by all, especially by those who’ve invited them to work with the locals — Sir Lachlan Morrison (Graham McTavish) and his wife Lady Delia Morrison (Jacqueline Leonard). And even though none of the blatantly stereotypical local heathens hide their disdain for the God fearing duo, Beth and Steve still readily accept being the Queen of the May and the Laddie for the annual May Day celebration that celebrates the Celtic Goddess Sulis. Warning signs be damned just like those dirty Celtic deities.

Hardy wipes away any notion that unknown thrills or scares are around the corner, instead choosing a paint-by-number approach that culminates in a final act that is, oh so, predictable and terribly dressed. Throughout The Wicker Tree, he continually drives home the farce that is organized religion — whether it’s Christianity, Judaism, Islam or Hinduism — the joke is on those zealots that are too rigid to believe and have an open mind. Perhaps with a stronger cast at his disposal this message could have resonated better.

First time actress, Brittania Nicol, looks the part with her doe-eyed naivety and has a wonderful singing voice (assuming she is the one actually singing) but she has no emotional range to speak of. Henry Garrett, is certainly likable as the dimwitted Texan cowboy, but he is limited in scope, being reduced to clinging to his ragged cowboy hat like a child to a safety blanket and saying, “Yes, ma’am” too often. Honeysuckle Weeks as Lolly, the over-sexed temptress, however, lightens up the otherwise glum atmosphere of the flick with her enticing talk and more enticing body.

Unfortunately, Weeks’ well toned frame gets lost in The Wicker Tree as does most everything else. It’s a shame really — there is commentary here that is worth a listen if one can be bothered to sift through the debris . . . 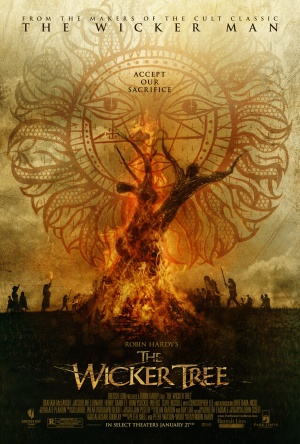