As a heterosexual male, I am probably among the minority of those who have read Janet Evanovich’s Stephanie Plum books. I’m totally cool with that. I find the books funny enough without being degrading, intelligently written, and full of excellent, memorable characters. So I was more than a little leery when I heard that the first book in the series would be translated to the big screen, and even leerier when it was announced that perpetually petulant Katherine Heigl would play the lead role. I’m happy to report that she’s not miscast in One for the Money, that she has the Jersey attitude and look down very well (although perhaps still a little too pretty for how I’d imagined Stephanie Plum). In fact, I was pleasantly surprised to see that Heigl was also able to elevate the movie (a necessity as it’s not exactly a plot-heavy film or one with strong special effects).

Stephanie Plum is down on her luck when we first meet her. She’s just been fired as a lingerie saleswoman at Macy’s. She lives in a lower-middle-class part of Trenton, New Jersey known as The Burg. She has a hectic family life. Her car’s about to be repossessed and she’s behind on her rent. Her mom suggests she go work for her cousin Vinnie (Patrick Fischler), who owns a bail-bonds company. The opening is for file clerk — up Stephanie’s alley — but turns out that’s a dead end. All they have is bounty hunter, so our glamour gal takes the job.

Plum’s first skip is a cop named Joe Morelli, who’s suspected of shooting an unarmed man to death. If Steph can bring Morelli in, she gets 10% of the bond, which is $500,000. $50,000 can go a long way if you have bills to pay. Trouble is, there’s a history between Plum and Morelli (Jason O’Mara); seems that he took her virginity in high school and never called and that she ran him over with her car shortly thereafter. You know, normal stuff. Oh, but she’s just in this for the money.

We meet some interesting characters along the way. One of Plum’s coworkers is a freelancer named Ranger (Daniel Sunjata), who knows all and is a sort of a ninja who actually does use guns. And then there’s Lula (Sherri Shepherd), the talkative hooker who can be bought off with snacks. For my money — no pun intended — the wackiest character in the book is Stephanie’s Gramma Mazur, played here by the indomitable Debbie Reynolds, and although she’s toned down a little for the movie, she still gets some of the funniest lines and scenes.

Oh, and John Leguizamo and Fisher Stevens show up in small, but pivotal roles. O’Mara, by the way, is a dead ringer for a young Mel Gibson, complete with charm.

How, however, was it possible for Heigl to be the cement that kept One for the Money together is a mystery. I’ve never liked her on-screen personas (“The Ugly Truth,” “27 Dresses”) but here she seems to be more immersed in the role than ever before. Hey, I am from New Jersey. I know Jersey girls. Heigl hits most of the notes pretty damn well. At no time — and this is no small feat — does she come across as a smart-ass, sexier-than-thou princess. Stephanie Plum the character is supposed to be cute/sexy, but not a goddess and most certainly not one with high self esteem. The screen version of her matches the book version fairly well.

Nonetheless, this might be a movie that people can wait to watch at home, though. It’s not necessarily a big-screen adventure, and I’m glad the studio didn’t promote it as one or insist on a lot of explosions (although there are some good ones). It doesn’t deviate from its premise — cupcake takes on tough-guy job — and, even though some might argue that it takes way too little time for the girly girl Stephanie to learn how to handle bad guys and firearms, and that its ending is predictable, One for the Money delivers exactly what it promises as a result. 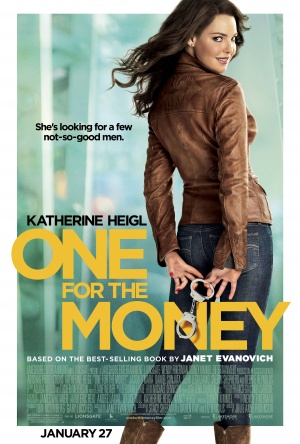